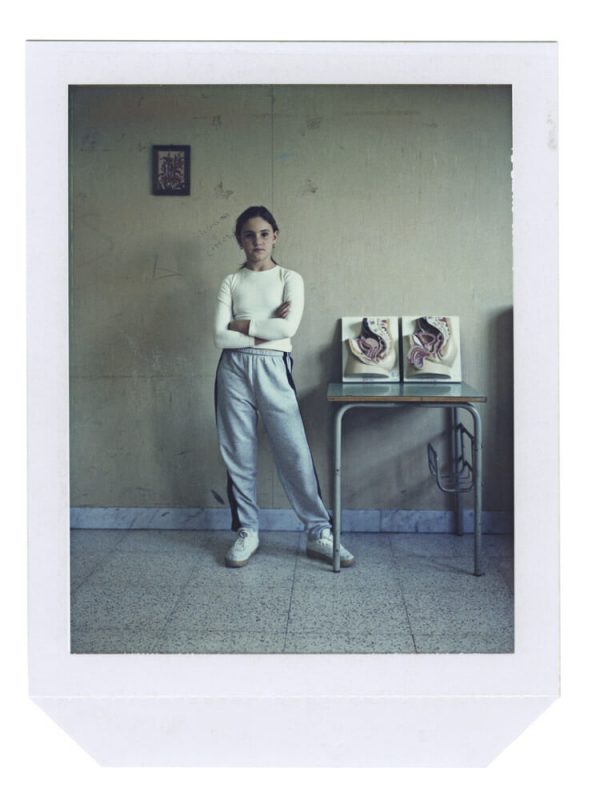 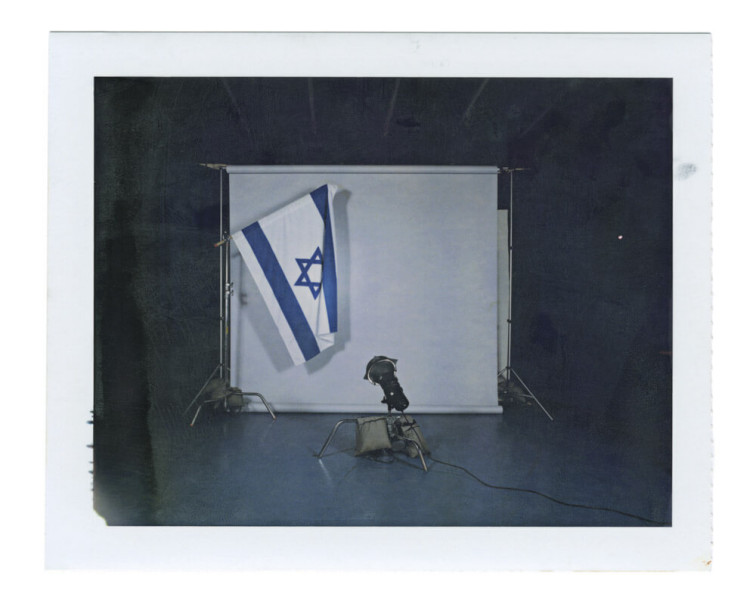 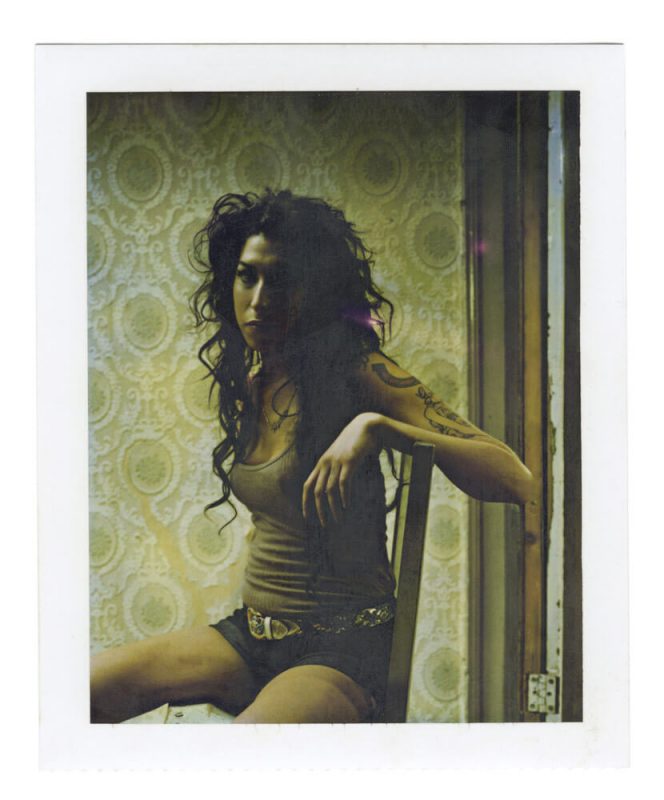 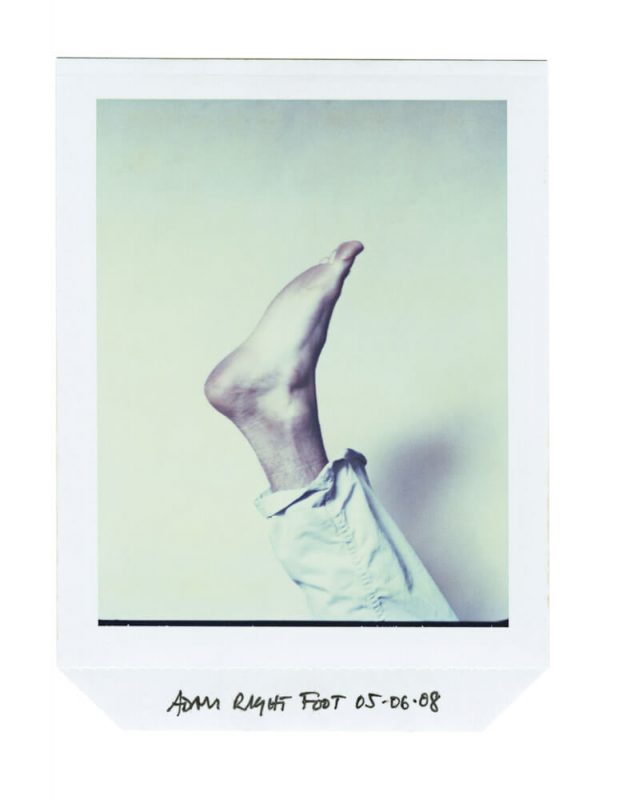 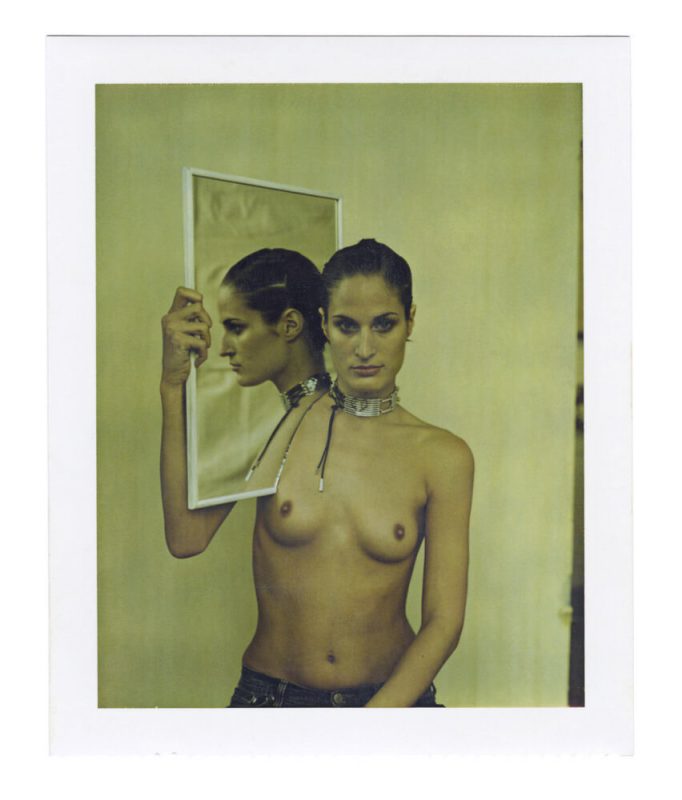 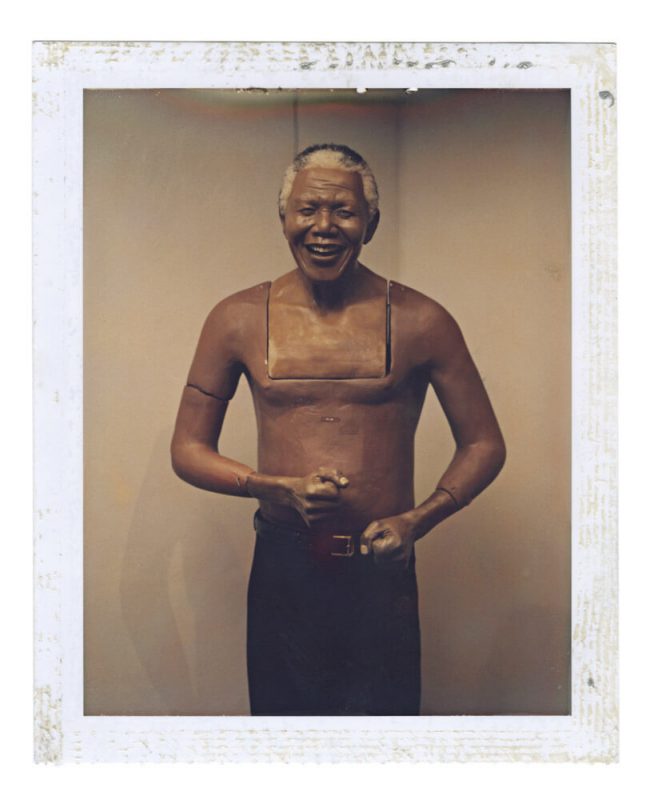 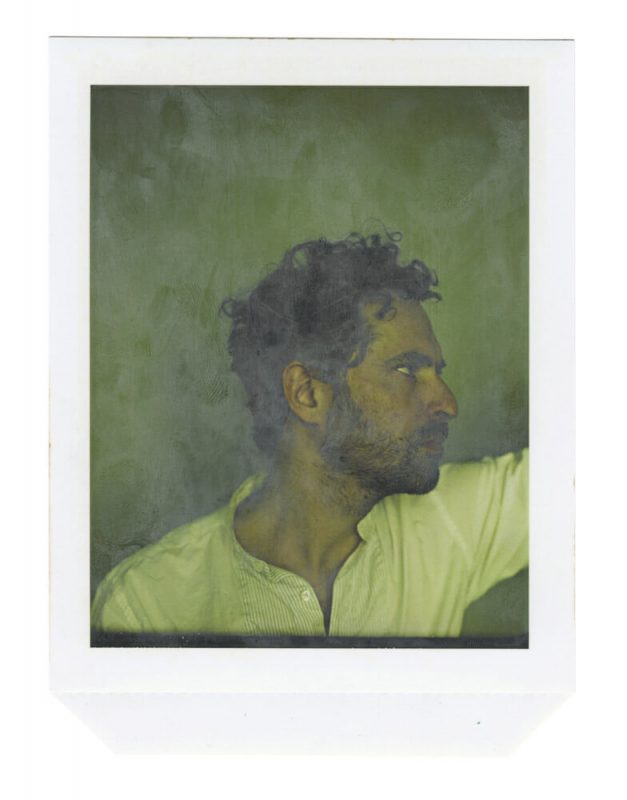 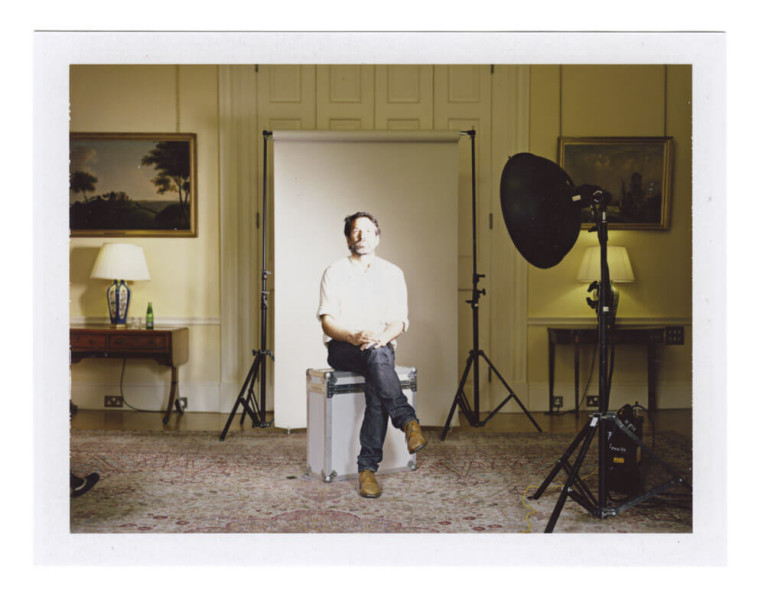 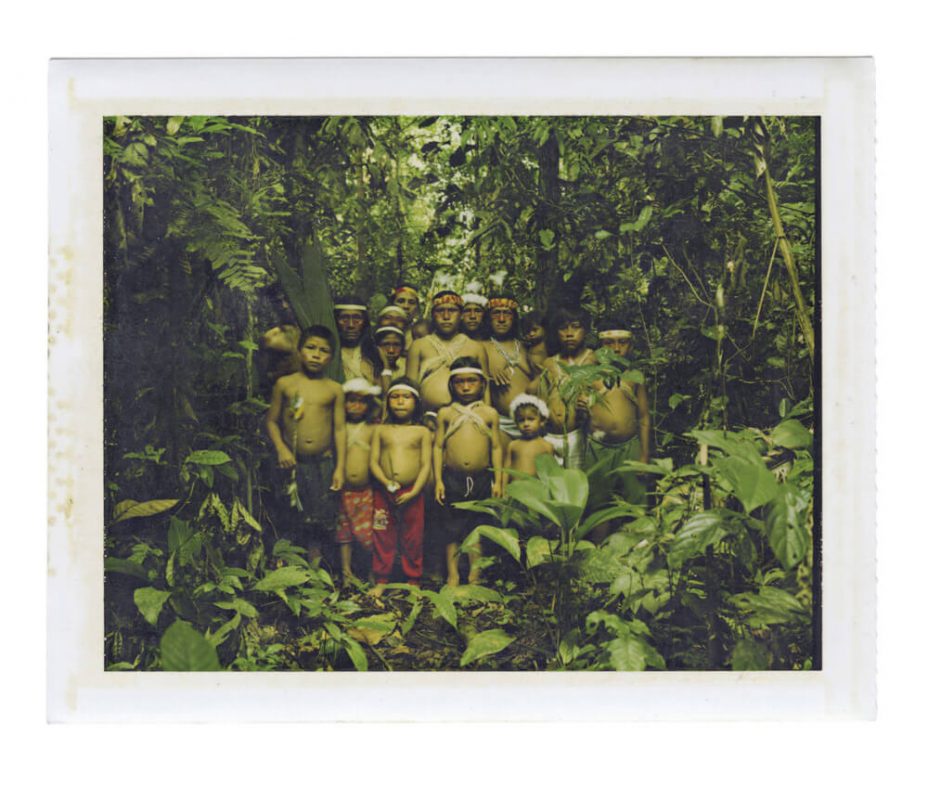 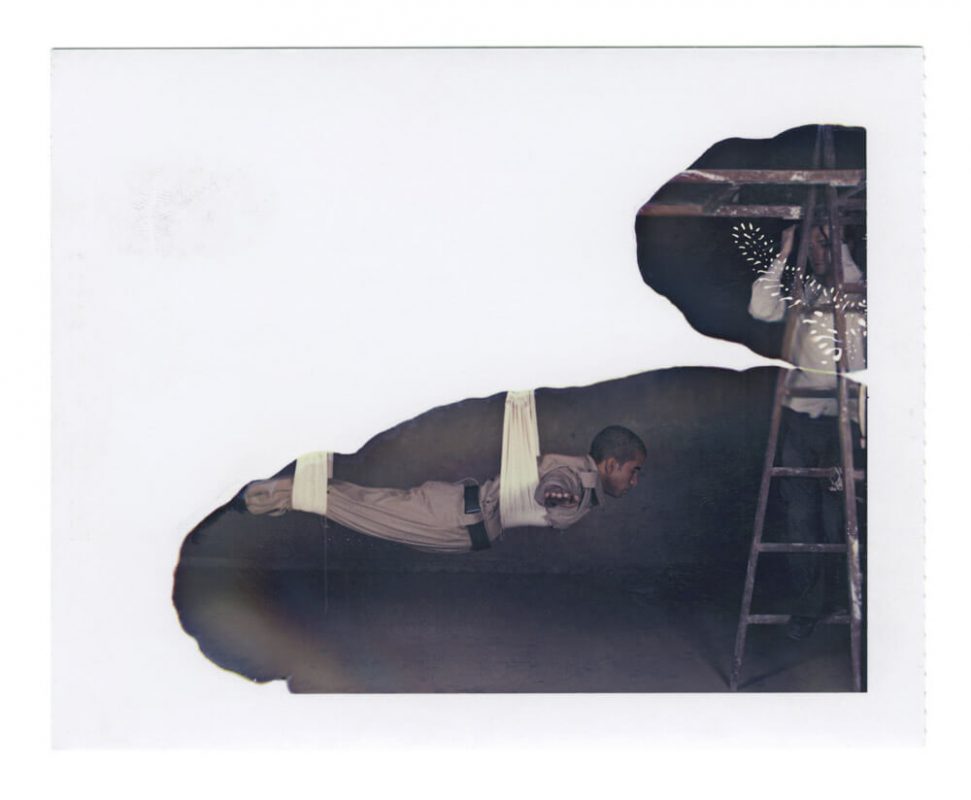 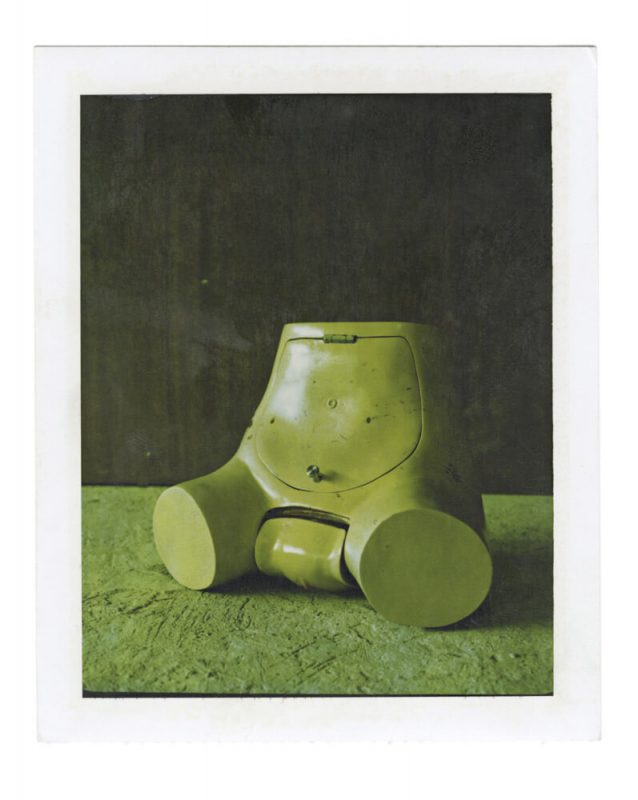 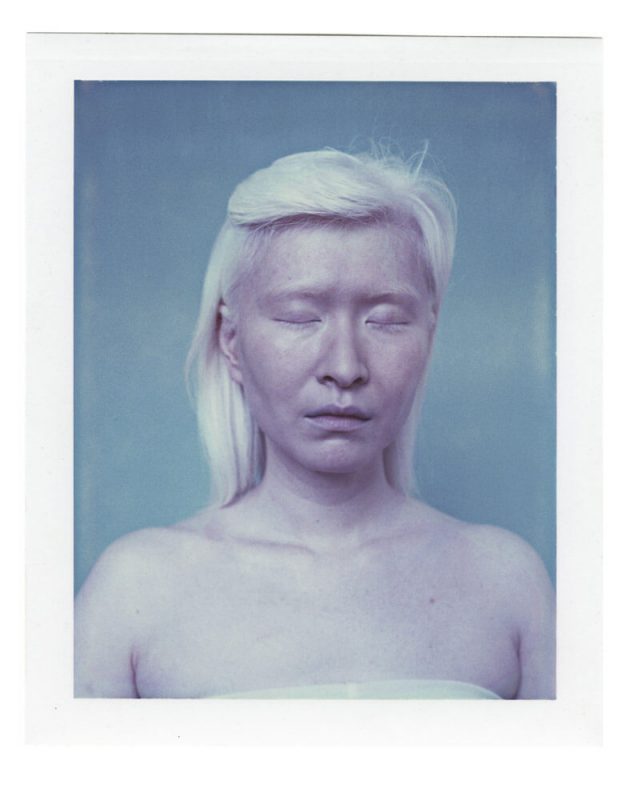 Stirring Around in a Discordant Cabinet of Curiosities

Anouk Kruithof: On a high wooden table something small and cute attracted me and drove me towards it. It was a little book wrapped in semi-transparent pink paper, inviting to be unpacked. The high table was part of the furniture at TEMPORARY OFFICE in Arles, France, which was a gathering space organised by Self Publish, Be Happy, The British Journal of Photography Journal and Hard Copy. This temporary office functioned as a venue for presenting new publications and organising lectures around photobook-making and publishing. I started unwrapping and what appeared was a small mint-green cardboard booklet bound with black tape with an actual polaroid placed on the cover.

Adam Broomberg and Oliver Chanarin: This mint-green colour has followed us around. It’s a particularly South African colour. Many of the homes in the countryside were painted partly in this colour. It’s also the colour of prisons and psychiatric hospitals. Both places we’ve spent time in for professional and non-professional reasons.

AK: The Polaroid contained an image of two hands making some gesture. With both hands I was holding the book, touching it, turning it around. It felt like an object; the physicality became stronger by taking out the Polaroid, which was a queer experience. My hands mingled with the two hands on the image. It was almost like making contact with a book in a human way. Wonderful. Underneath the Polaroid you find a hidden phrase of Fernando Pessoa “If the heart could think it would stop beating?”

AB & OC: This is something like when you have those tiny moments of lucidity and everything feels like a foolish and pointless charade. Those moments freeze you up in horror. Luckily they pass and you’re able to carry on.

AK: The nicely printed and perfectly bounded little Polaroid book made in collaboration with Bruno Ceschel is the first edition of the SPBH bookclub, which offers a series of three photobooks per year, made exclusively for its members. Each volume contains a series of never-seen-before photographs. In this case, excluding the Polaroid on the cover there are 59 of those hidden treasures. I thought about Polaroids naturally often being untitled. Can you describe them in one word?

AK: Nelson Mandela laughing. Nelson Mandela’s image is always very powerful. In this image you observe the lack of proper construction in glaring contrast with the laughter, which makes it so excitatory, for that I need more than one word please….

AB & OC: Mandela’s wax limbs were being cleaned when we came into the Museum to Apartheid, which is a scrappy little place in the corner of the largest casino in South Africa. The image of Mandela is sacred property, and also closely controlled by the country’s copyright laws. So this image really disturbed South Africans, perhaps because it alludes to the faltering mechanics that have emerged in post-apartheid society. Mandela’s legacy is not entirely secure in a country reeling from waves of violent xenophobia and electrical outages. In the UK the Observer Magazine were planning to run it on their cover, but it was pulled at the last minute. Perhaps it just felt too transgressive.

AK: The spread with Polaroid number 22 and 23 is extremely alarming because of the shuffle in seductive aesthetics and Thespian content. I set my eyes on two sculptural bread-houses. I am thinking of rocks, bunkers, German-healthy-but-too-heavy-to-carry-bread. While I am aware it’s a suicide bomb from the Chicago series.

AB & OC: We were feeling like counter insurgents in a wasp’s nest.

AK: As well as the images inside, there’s also the actual unique Polaroid on the cover. The edition is 250, which means in the case of this book there are 250 different Polaroid’s of ‘situations’ with those two hands. Within the context of your work I immediately started thinking about what these gestures of the hands would mean? Maybe there is a secret message behind them in some sort of sign language which would only reveal itself, when you place all 250 books next to each other in a long line through the picturesque streets of Arles? It’ll stay as a shiver of possibilities, because the distribution of the publication by the bookclub scatters the answer behind the secret ‘hands’ Polaroid collection in the universe of the different owners i.e bookclub members.

AB & OC: Together all the books would make a zoo or impossible creatures. Something like a Borgesian nod.

AK: The idea of Bruno Ceschel, founder of SPBH, is that the books flowing out of its book club must be very intimate, experimental and off-beat. Something like a little secret. I know you both agreed on this idea and therefore this book is prosperous. To me this is a memoire of loose fragments of your close collaboration, the travels you made, the interaction with the encounters you had. It’s lovely and, at the same time, an obscure cabinet of curiosities. Because of it’s mystery it makes your brain expand and tickles your emotions. But on the other hand, it is also just another book with images in it, which is contradictory with the project-based conceptual works from recent years. It feels less anonymous, less objective. Even self-portraits and your own body parts play a role in this book…

AB & OC: It’s true that this is our least conceptual book. And we also allow some of our personal experience in – there is a Polaroid of Adam’s mother included. And we appear too. In the past we have resisted this. In part because there’s two of us and we’ve prized the anonymity. There is never any sense of who took which picture, and it’s never mattered much to us. That’s still the case. But with the Polaroids it was different because they contain traces of us; we used each other to test lighting and trial ideas. So this part couldn’t be surgically removed. The green portraits were taken in a hotel room in Madrid after smoking a gram of heroine.

AK: If you consider writing an (Inte)review as akin to preparing a dish, here are three ingredients: Book+Polaroid+SPBH. I just need some assistance with stirring.

AB & OC: For a long time, the book was the goal. In our minds images lived on pages.

AB & OC: For over ten years the Polaroid functioned in exactly this way for us: As an exchange, a physical exchange, we quite literally left a trail of Polaroids behind us wherever we went (actually not always because we’d often get attached to them). But the function of the Polaroid was more than this, more than a gift. It offered the possibility of Feedback – a phrase developed by Jean Rouch, the French ethnographer and film-maker. Rouch made his ethnographic films in collaboration with his subjects. He refused to uphold the traditional hierarchy of power between the observer and the observed. Once he had produced a first edit of a film, it would be screened on location and comments would be incorporated into subsequent edits. It was not a token gesture towards collaboration. His films evolved out of this process of feedback and discussion. Likewise we have used Polaroids in this way, to break down the one-way flow of power between us and our subjects. But there is a flip side to the story, because the Polaroid also robs us of something precious, which is blindness and the possibility of accident. In May we visited a remote part of the rainforest in Gabon, central Africa, in order to observe a pygmy village perform a traditional ‘eboga’ initiation. Perform is probably the wrong word, because despite the use of masks and costumes, these initiations bear little relation to the notion of theatre. We didn’t have Polaroid, or even a digital camera, and therefore couldn’t share our pictures at the time. And this made the whole process much more opaque. There was no hope for feedback. But that blindness was also refreshing. The process and the results are somehow more threatening and more mysterious.

AB & OC: If anything the self publishing phenomenon suffers from an acute case of nostalgia; many of these projects could quite easily be websites, or something else that we haven’t discovered yet instead. Their bookness feels arbitrary.

AK: I have some difficulties with the side effects of the Polaroid. Let’s call it ‘romantic blemish’, because it’s too easy and too beautiful. I think you do too.

AB & OC: Polaroids do produce their own category of errors and it’s certainly possible to fetishise this, which is less interesting.

AK: But let’s end this interview with the urge of this book and dank je wel for your collaboration.

AB & OC: This book is a simple goodbye to a material, a process, a smell we used to live with every day and no longer have. It’s a small selection of a much larger archive of our Polaroids, many of which were made as tests rather than finished images. This archive of unfinished images is now complete, because we no longer use this technology. There is an emphasis right now on the photograph as object – and Polaroids – being Things – resonate. But that’s not where we are coming from exactly with this book. It also co-incides with our interest in ‘process’, which is in partly the theme of our next show. The unfinished, damaged, poorly exposed, poorly composed poorer sister to the final product just feels a hundred percent more engaging; this unfinished quality gets so much closer to an authentic experience, and the messiness of our ideas.♦

Adam Broomberg and Oliver Chanarin are South-African born, London-based artists who together produce photographic work that explores the documentary and ethnographic traditions of photography. They regularly teach workshops and give master classes, as well as lecturing on the MA in Documentary Photography at LCC in London.They are the recipients of numerous awards, including the Vic Odden Award from the Royal Photographic Society and continue to works for a number of magazines including The Guardian Weekend and The Telegraph Magazine.

Broomberg and Chanarin have produced nine monographs to date, their most recent being War Primer 2 (2011), published by MACK Books. The pair have exhibited within numerous group shows, including at Saatchi Gallery, London; FOAM, Amsterdam; and at the Les Rencontres d’Arles, France. They have also had solo exhibitions at Paradise Row, Dusseldorf and London (2012, 2011); Goodman Gallery, Johannesburg (2011); and at Photomonth, Krakow (2007). A forthcoming exhibition of their work, ‘To photograph the details of a dark horse in low light’ will be on display at Paradise Row, London from 12 September to 25 October, 2012.

Their work is represented in major public and private collections internationally, including at The National Portrait Gallery, London; Victoria & Albert Museum, London, International Center of Photography, New York, Musee de l’Elysee, Switzerland, the Stedelijk Museum, Amsterdam and Saatchi Gallery, London. Between them, they also sit on the Board of Trustees at Photoworks and The Photographers’ Gallery, London.

All images courtesy of Self Publish, Be Happy. © Adam Broomberg and Oliver Chanarin