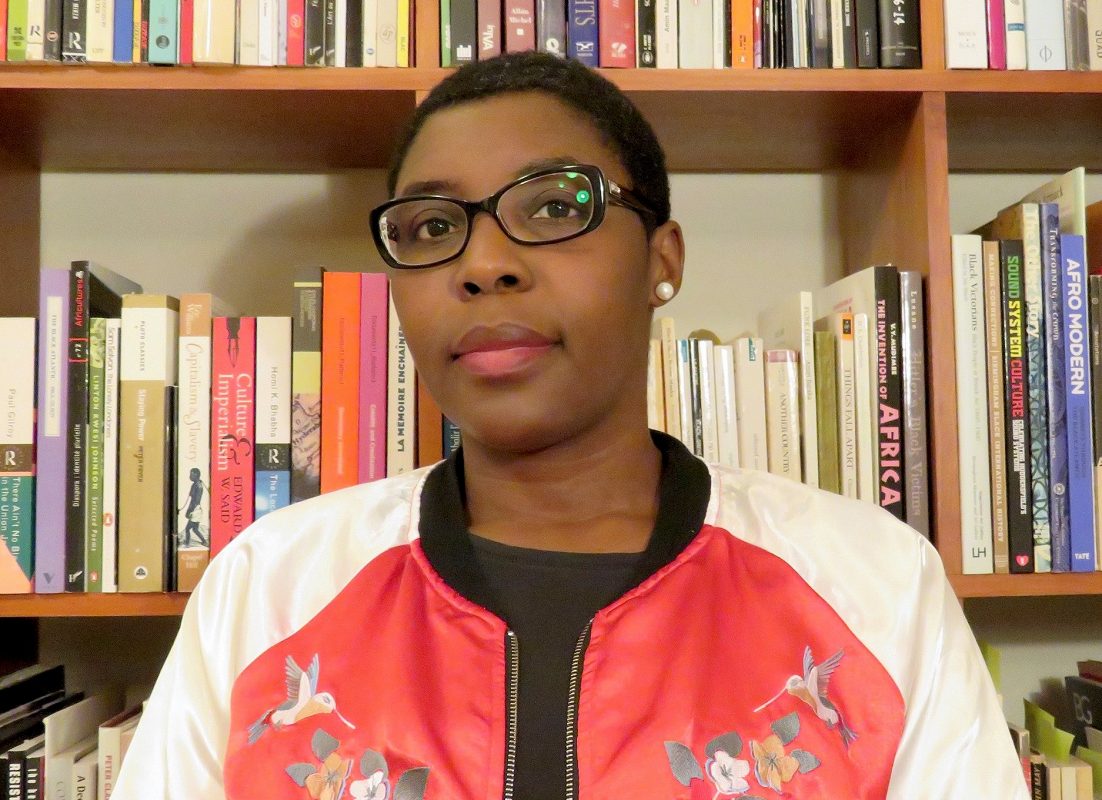 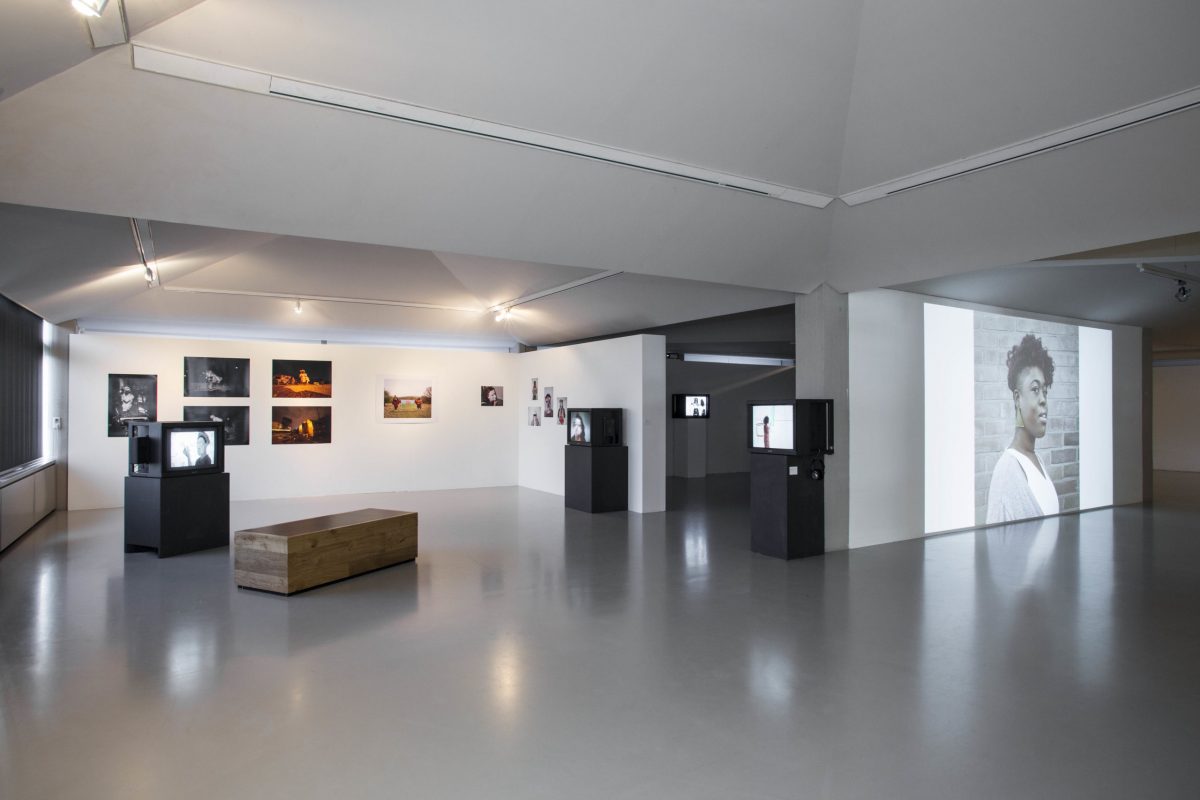 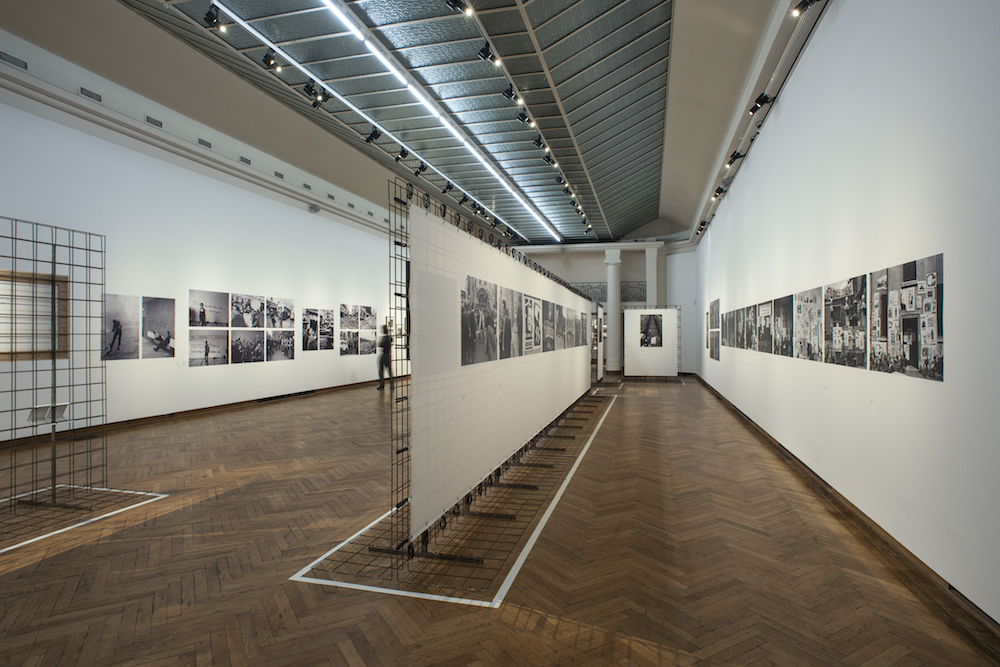 Christine Eyene is an art historian, critic and curator. She is a Research Fellow in Contemporary Art at the University of Central Lancashire where she works on Making Histories Visible, an interdisciplinary visual arts research project led by Professor Lubaina Himid CBE RA (Turner Prize 2017).

When I curated my first exhibitions, I was interested in putting my ideas into forms, in a physical space. At the time, my practice was predominantly focused on art writing and a lot of it had to do with the new discourses on contemporary African arts from an African perspective. Because there had been a long-running absence of Africa ­­in contemporary art scenes, to me, physical exhibitions were, and to some extent still are, about reclaiming space for underrepresented art practices.

Now, fifteen years in, I am interested in space as a canvas, and transformation. I love visiting exhibitions and seeing how space metamorphoses. As an independent curator, I develop exhibitions for various venues, rarely in the same venue, although that’s been the case at the National Gallery of Zimbabwe (Harare), Bozar (Brussels) and New Art Exchange (Nottingham). But usually it is a one shot. So, once I am commissioned for a project, I try and visit all the exhibitions in that space to see those transformations, and to have a feel of the audience.

That’s also a major difference between writing and exhibiting. One gets to engage with audiences in a more immediate manner. You would get visitors who know about art or are professionals in the field, and people who are not specialist and visit for leisure. Knowing about one’s audience is also a way to address the imbalance that still exists in terms of diversity. This can only be appraised through the tangible form of an exhibition.

Speaking as a curator who is African, black and a woman, when I look at society, I find that there are still too many cases of under-representation or misrepresentation of our communities in the media. We’ve seen how, in recent years, nationalisms and bigotry have spread around the world. What the arts can do is challenge those views by providing visual counter-narratives that can also be disseminated through information channels. Especially now with digital media. In many respects, that is the intent behind my projects with African or Diaspora photographers and my feminist exhibitions.

Maybe I should add that, I do not only curate photography exhibitions. For five years now, I have been developing sound art projects because I am interested in sharing with my audience other forms of sensory experiences. Photography is the starting point of my journey into the arts, but I also want to challenge myself and experiment. For instance, the theme of the next Casablanca Biennale is, for a large part, inspired by my research on the links between image-making processes in the work of South African photographer George Hallett and African literature. This is leading towards text-based practices in which an ‘image’ becomes a metaphor.

One skill? I’m sure each curator would give you a different answer. It’s difficult to only give one answer. Curating is a combined set of skills and they depend on each curator’s approach or practice.

It could be the ability to bring together ground-breaking research, knowledge, or sensory experience, with meticulous organisational skills. But I also believe that ethics and values need to be brought into the mix. Because beyond the skill(s), and in fact at the heart of curating, is the notion of care. Caring for the artists, their art, and the audience. And, behind an exhibition is not just the curator. We work with teams and we need to create an environment where everyone feels valued. This means knowing how to delegate and to create a sense of collective ownership.

You also need determination and persuasive skills. Because, every so often, you have to make sure your ideas, or curatorial vision, is respected. Especially when collaborating with institutions that have their own artistic direction, or an agenda that might be informed by the funding streams upon which they depend.

I could say more, but it’s already more than one skill.

The first projects I worked on, I was part of a team at the French Institute in Rabat, Morocco, between 2000 and 2001. The exhibitions were conceived by the Director, French curator Nadine Descendre. I learnt a lot with her. We put on exhibitions by designer Pierre Paulin and artists Christian Boltanski, Kazimir Malevich, Alain Fleisher, Shirin Neshat and Mona Hatoum. This organisational aspect opened up a whole new world for me, beyond art history as an academic practice.

When I came to England at the end of 2001, I focused on writing. I approached French journal Africultures, became visual arts correspondent, and I think the first article I proposed was about the Africa Centre. I went to the Centre, interviewed the staff and they gave me access to their archive of events and exhibitions. At the time, South African artist and scholar Mario Pissarra worked there. We casually talked about South African art. The following day I got a call that they were looking for a bilingual person to write on African artists. While working there, Gus Casely-Hayford (recently announced as Director of the new V&A East) who was Director of Africa 05 festival, and Roger Malbert, then Senior Curator at the Hayward Gallery, visited the Africa Centre to invite us to develop a programme for Africa 05. Gus subsequently invited me to curate a specific project as part of the festival. This gave me the confidence to independently organise the London touring of Design Made in Africa, an exhibition produced by the French Institute, and to curate my first George Hallett project.

I began working internationally after curating Uprooting the Gaze: foreign places – familiar patterns (2010) a group exhibition that included award-winning photographer Zanele Muholi. The exhibition was part of Brighton Photo Fringe then Co-Directed by Helen Cammock (co-winner of the Turner Prize 2019) and Woodrow Kernohan (now Director of John Hansard Gallery). Together we brought a larger presence of African photography to the Brighton Photo Biennial.

One of the first exhibitions to have impacted me is probably Rhapsodies in Black: Art of the Harlem Renaissance, co-curated by David A. Bailey and Richard J. Powell. I saw it at the Hayward Gallery in 1997. At the time, I was living in Paris and studying history of art. It was the first time that I was exposed to an exhibition by black artists, articulating a history of Modern art that was different from what we were taught at university. To see this in a major mainstream art gallery, surrounded by black visitors, felt really good. I felt like I belonged. Which was rarely the case in art spaces in Paris in the 1990s. Although, earlier that year, there was an exhibition called Suites Africaines, organised by Revue Noire and co-curated by Simon Njami that was very important to us within the French context.

My first visit to a biennale was also memorable. It was the 2nd Johannesburg Biennale curated by the late Okwui Enwezor. I immersed myself in all the exhibitions in Johannesburg and Cape Town. To me it was a real discovery of contemporary art on a truly global scale.

More recently: Nick Aikens’ The 80s project at Van Abbemuseum (2016) that led to The Place is Here at Nottingham Contemporary (2017); Soul of A Nation: Art in the Age of Black Power curated by Mark Godfrey and Zoe Whitley (2017); Streams of Consciousness the Bamako Encounters – African photography biennial in Mali curated by Bonaventure Soh Bejeng Ndikung (2019) and Nirin, the 22nd Biennale of Sydney that opened in March, curated by Brook Andrew, both were great exhibitions organised under really challenging conditions.

Working in Africa or in the West are two different contexts. This can sometimes reflect on those responsibilities. Generally speaking, curators have a responsibility towards the artists, the venue and the public. If you invite an artist to be part of an exhibition, you need ensure the conditions are fair and clear. When it comes to presenting the work, you need to respect the integrity of an art work and present it as intended by the artist. This also means working within the technical and financial capacity, or limits, of an institution.

Consideration for the audience begins with selecting the artwork. You need to think about who the exhibition is talking to, who you want to engage, and how you are going to create bridges between the artwork and the public. There are contexts that can be more challenging than others, especially when addressing sensitive issues. Sometimes you need to tread carefully with topics that may attract forms of silencing. Especially if you work outside your usual environment. You need to consider what the audience can take and what is considered crossing the line, and also what the risks are for the artists or the exhibiting institution.

A challenging aspect of being an independent curator is that, even if you are the face of a project, and as such assuming responsibility for it, sometimes there are parameters upon which you have no control due to institutional procedures or opacity. That being said, there has also been occasions where I was able to raise questions about certain situations I observed within institutions. Which is easier for me to do as I come with an outsider fresh outlook.

The idea that being a curator is limited to the creative aspect of developing an exhibition. That is sometimes the case. But generally, behind the scene, there is so much administration that can range from artist liaison at the very least, right to being involved in the fundraising process, especially in contexts where there is no immediate public provision for the arts.

And also, the notion of power that tends to create a top-down hierarchy where the curator is placed at the top and you’re lucky or privileged if you are selected for a project. An exhibition is the physical form of a conversation, of shared ideas. It’s a lateral process. With time, I’ve also grown fascinated by how technicians are geniuses that solve complex installations. A show looks good because of them. Sometimes they are artists themselves. They understand the vision behind an art work.

Curating is a field that is both challenging and competitive. Therefore, it is important to develop original projects that bear your ‘signature’, so to speak. Be aware of what is out there. Not to follow the trends, but to figure out where you are positioning yourself. Start with topics close to your own interests or field of knowledge; subjects that you are passionate about. Try and engage with curators whose practice addresses the same topics as yours. But also, be curious about unfamiliar territories. Be open to dialogue. Treat all the people with whom you work with respect. Not just those at the top. You may find many obstacles along the way. But if curating is really what you want to do: persevere. There is room for a diversity of voices in the arts.♦

—
Curator Conversations is part of a collaborative set of activities on photography curation and scholarship initiated by Tim Clark (1000 Words), Christopher Stewart (London College of Communication, University of the Arts London) and Esther Teichmann (Royal College of Art) that has included the symposium Encounters: Photography and Curation in 2018 and a ten week course, Photography and Curation, hosted by The Photographers’ Gallery, London in 2018-19.