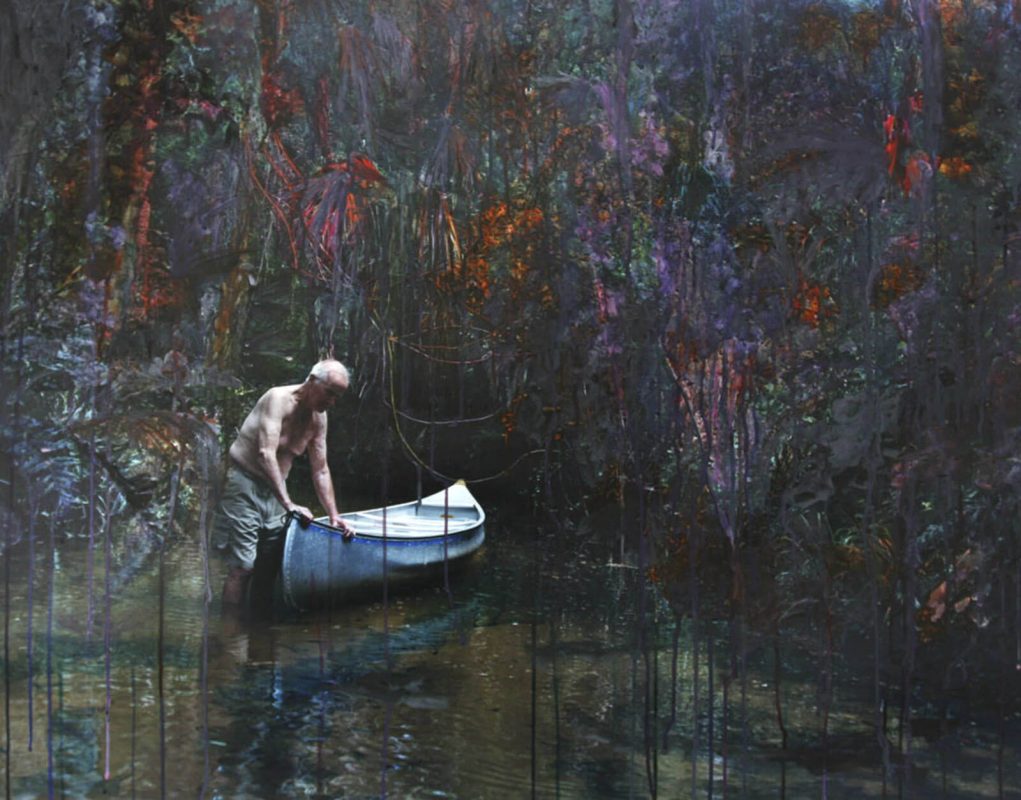 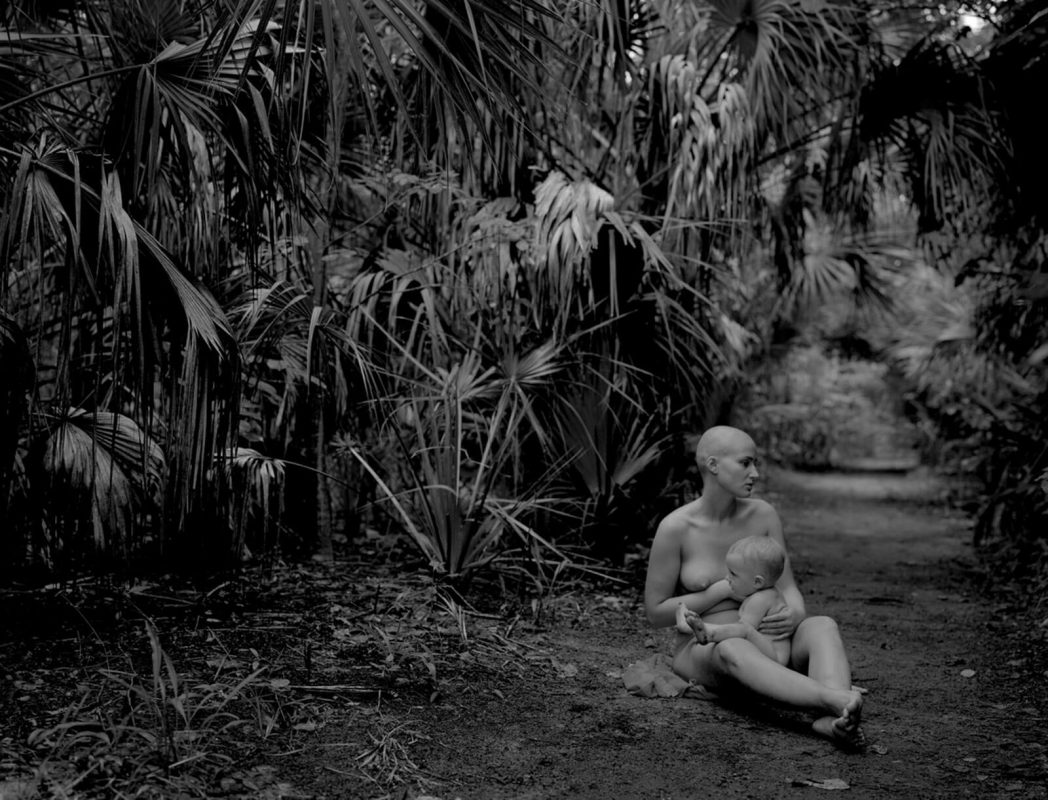 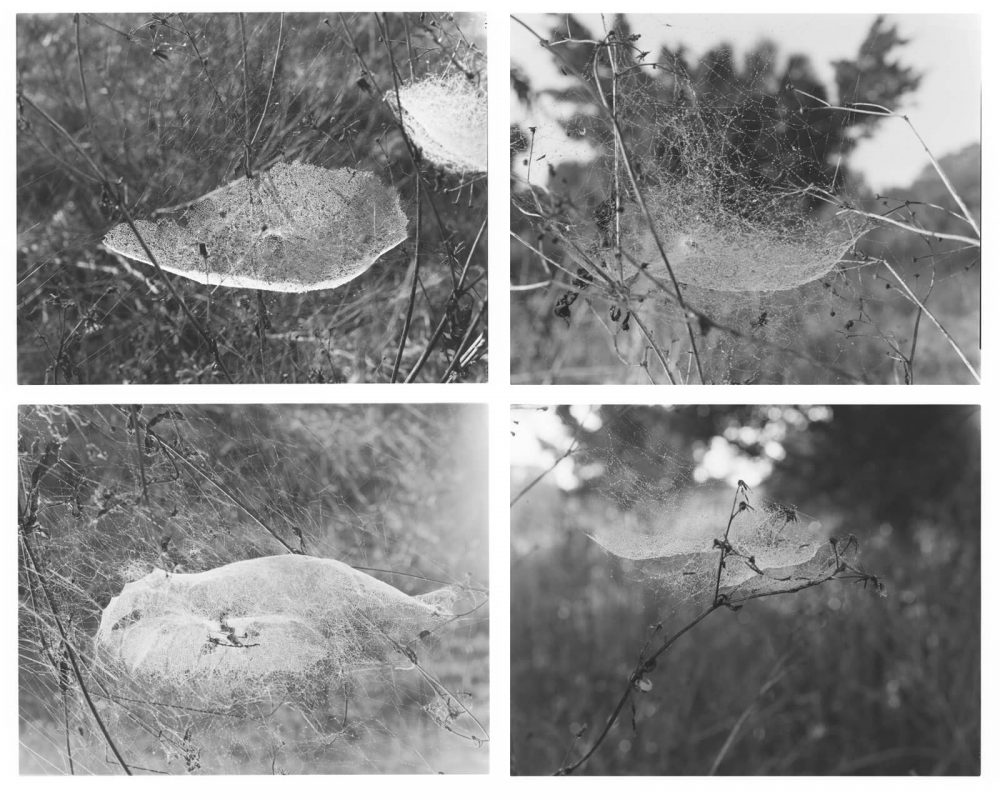 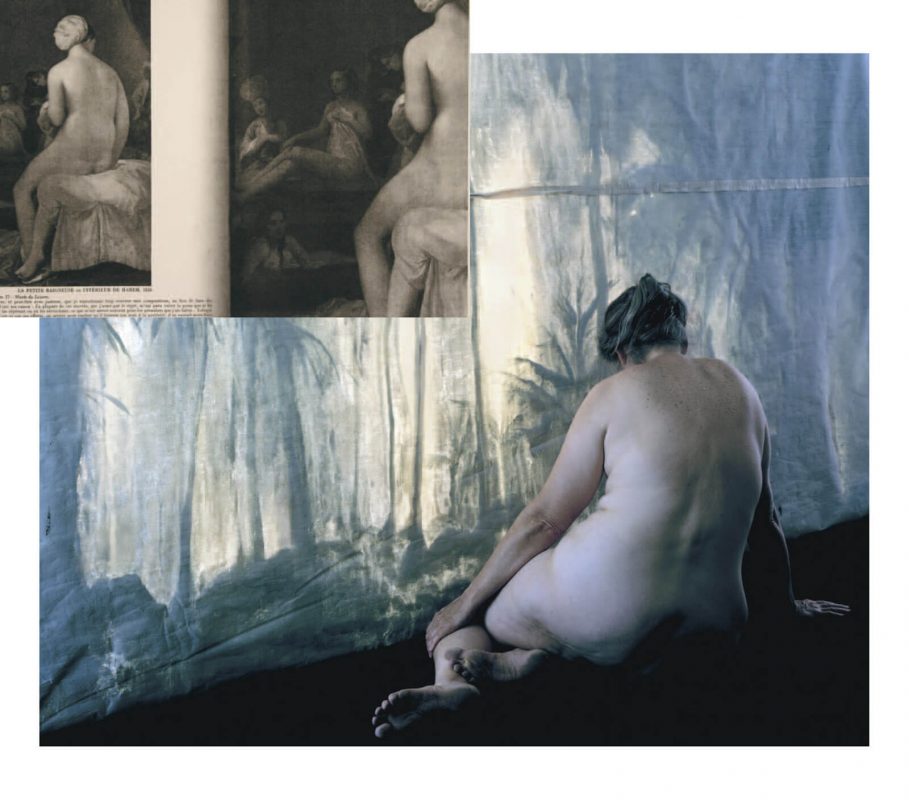 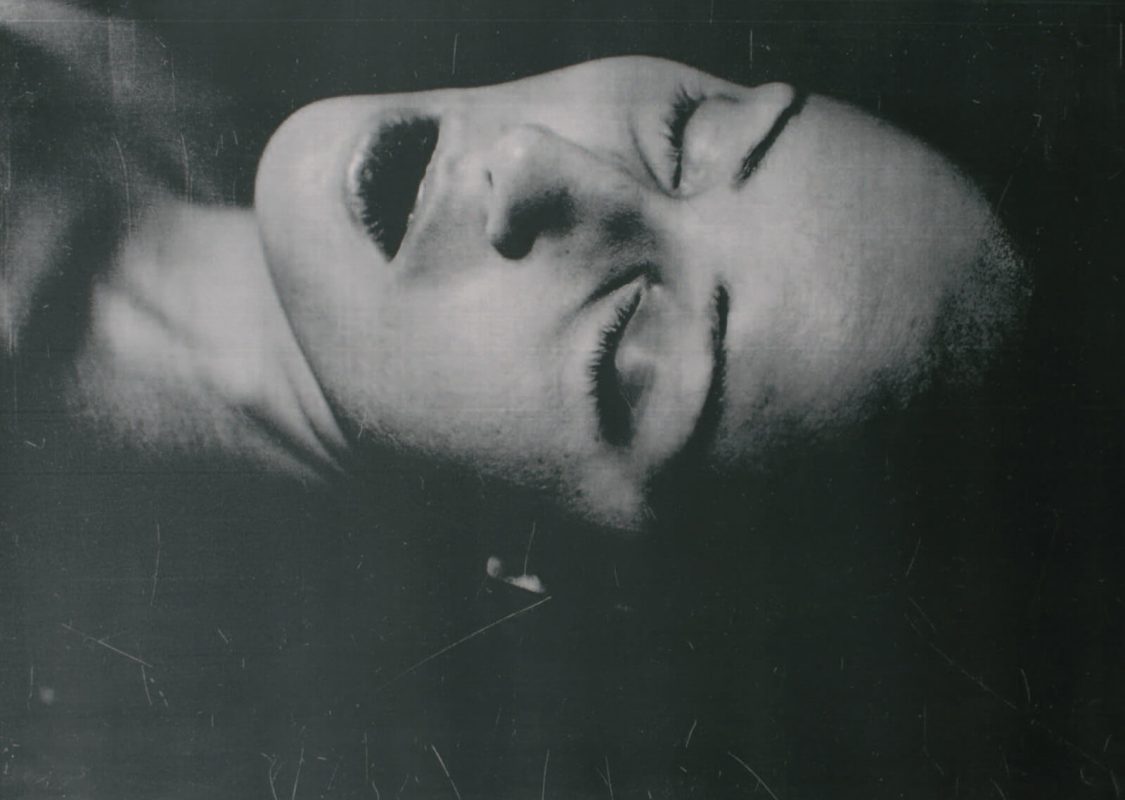 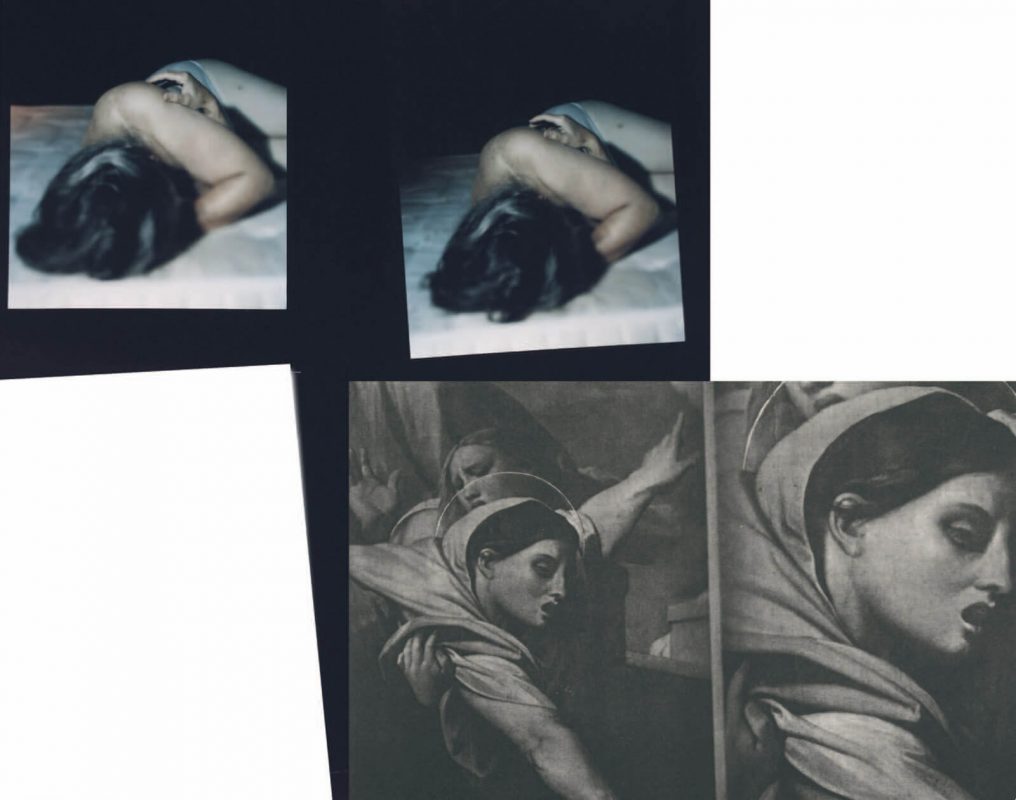 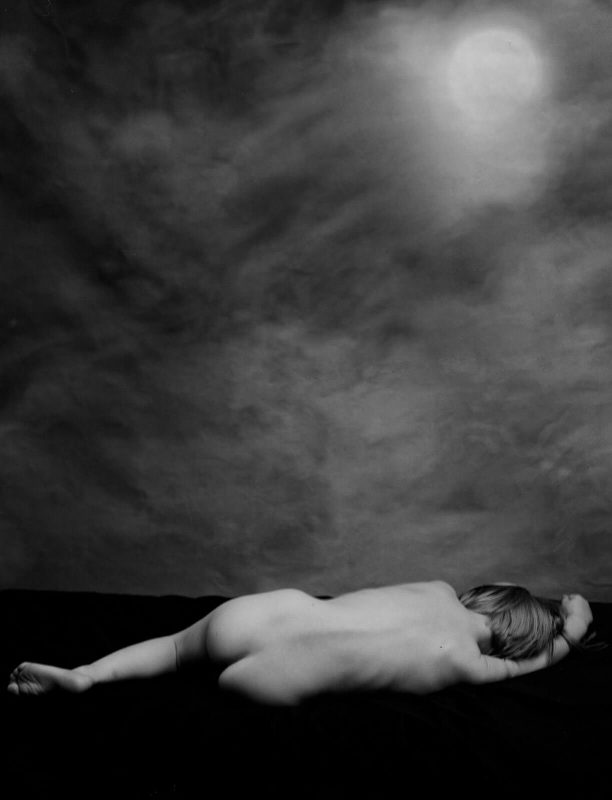 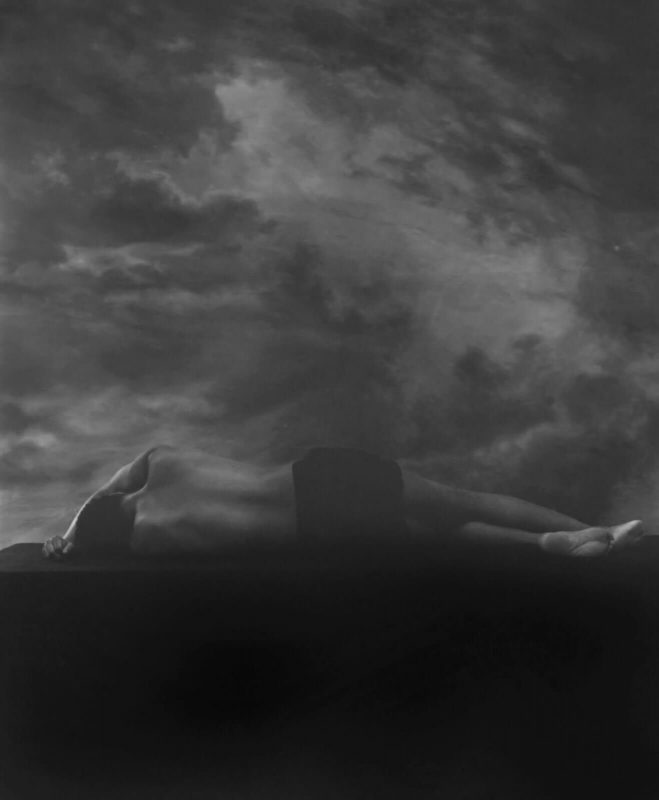 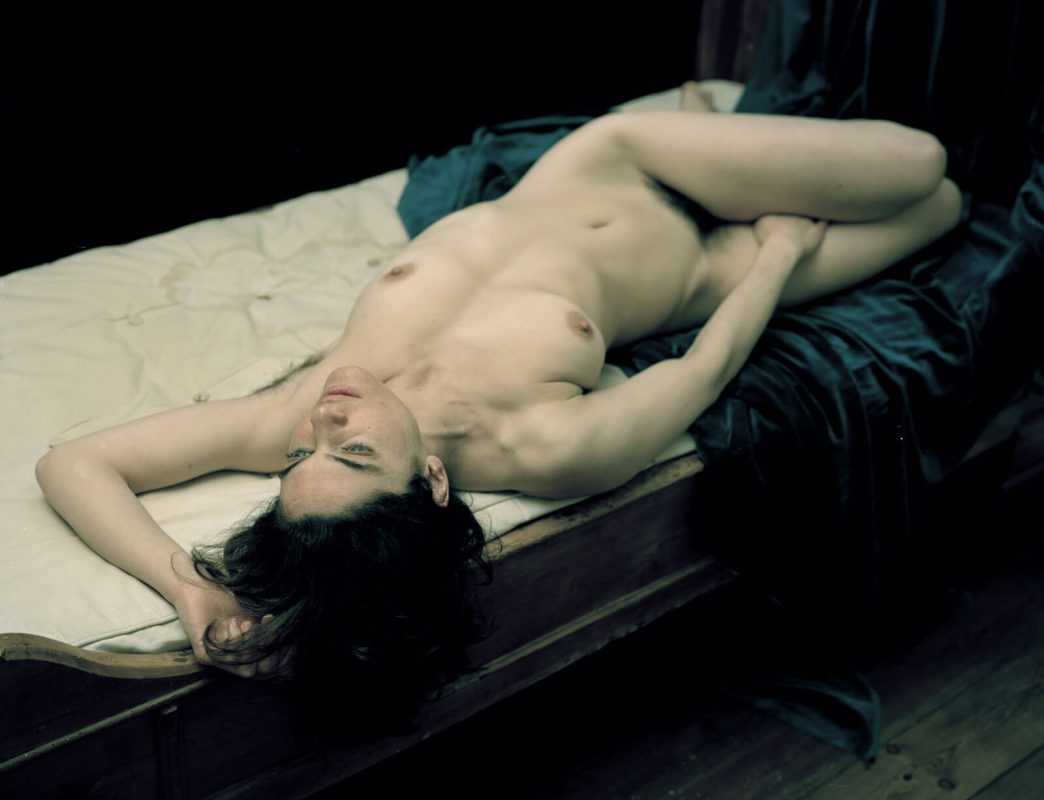 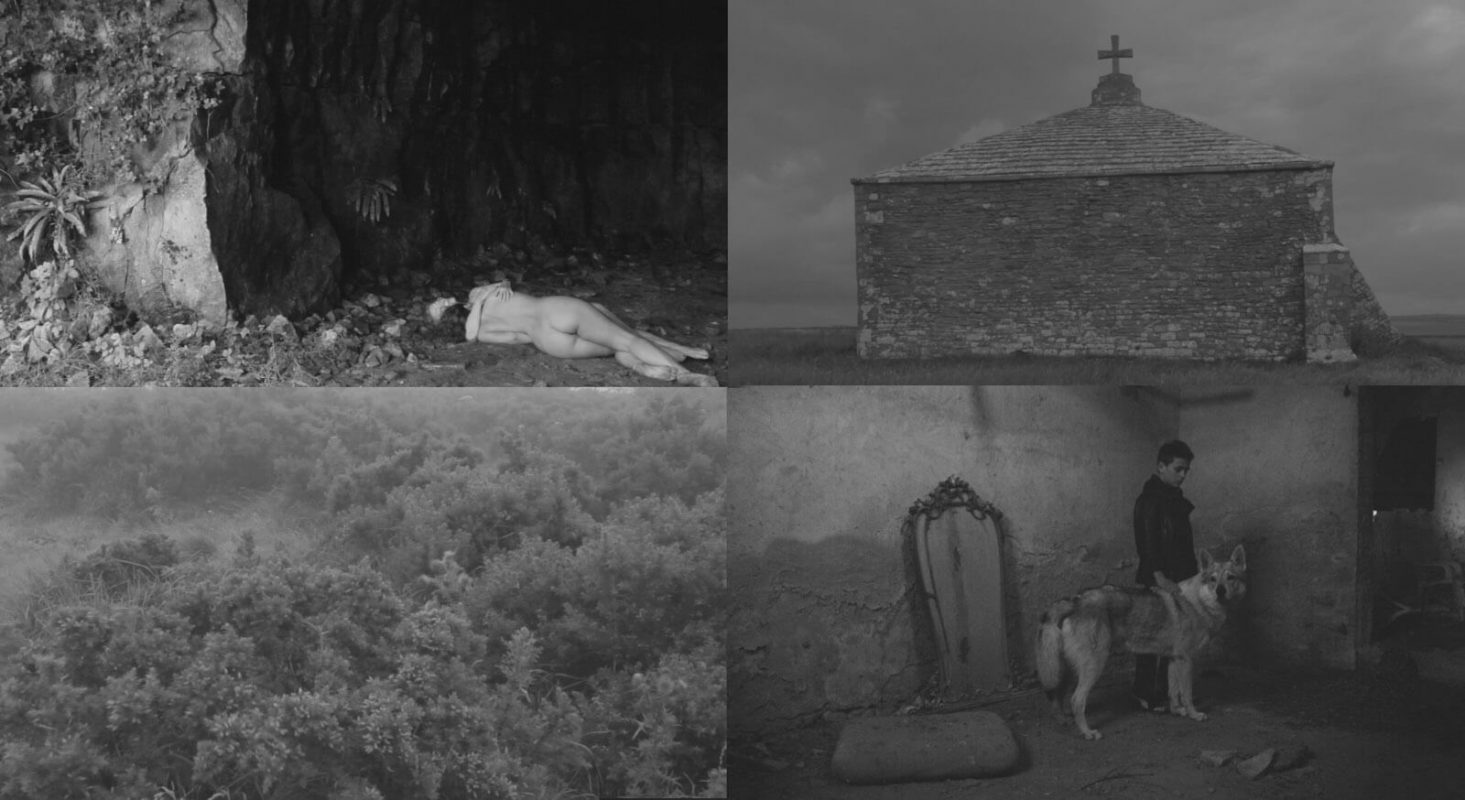 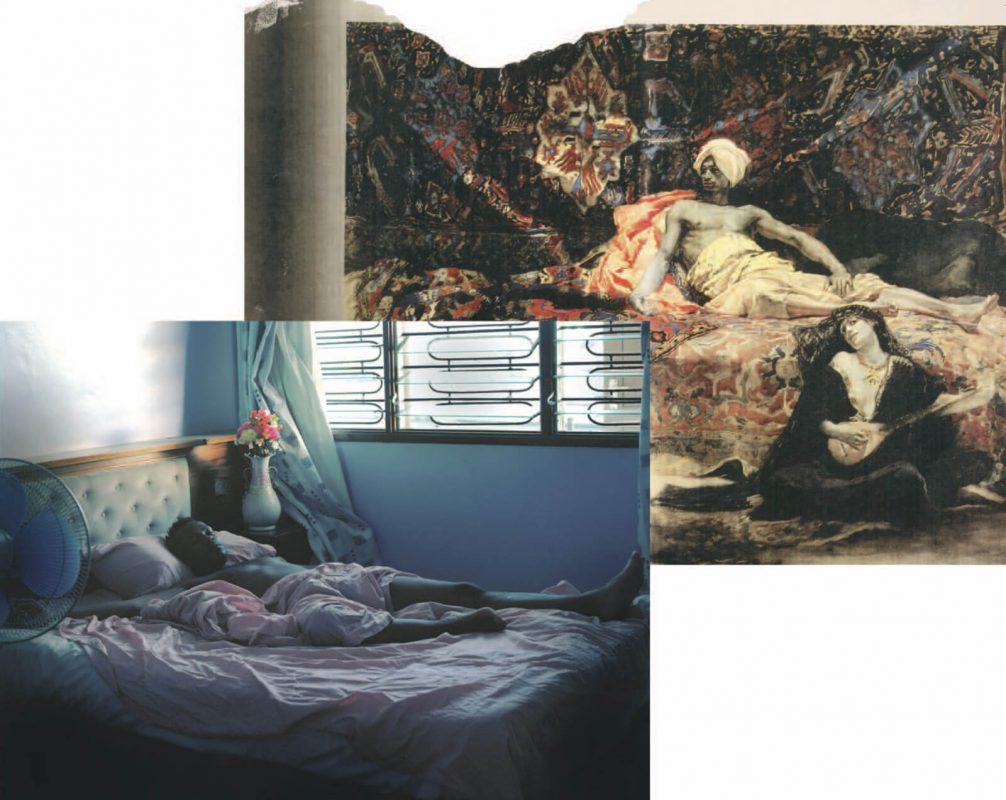 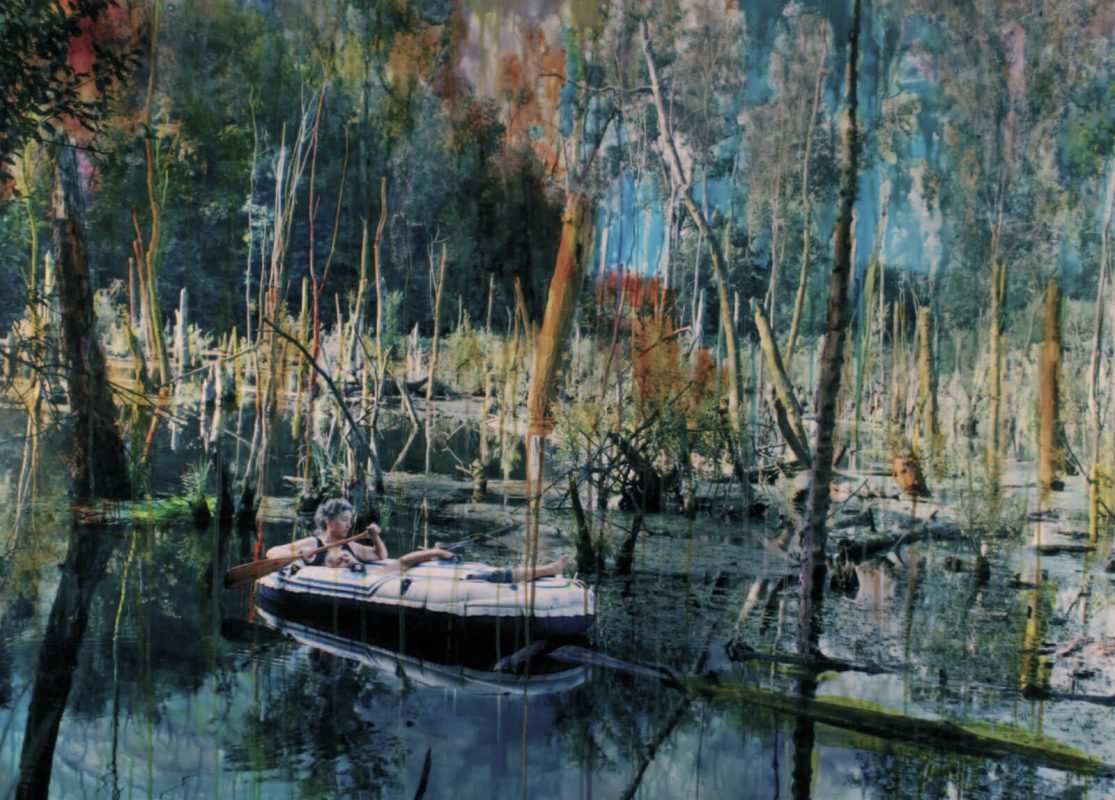 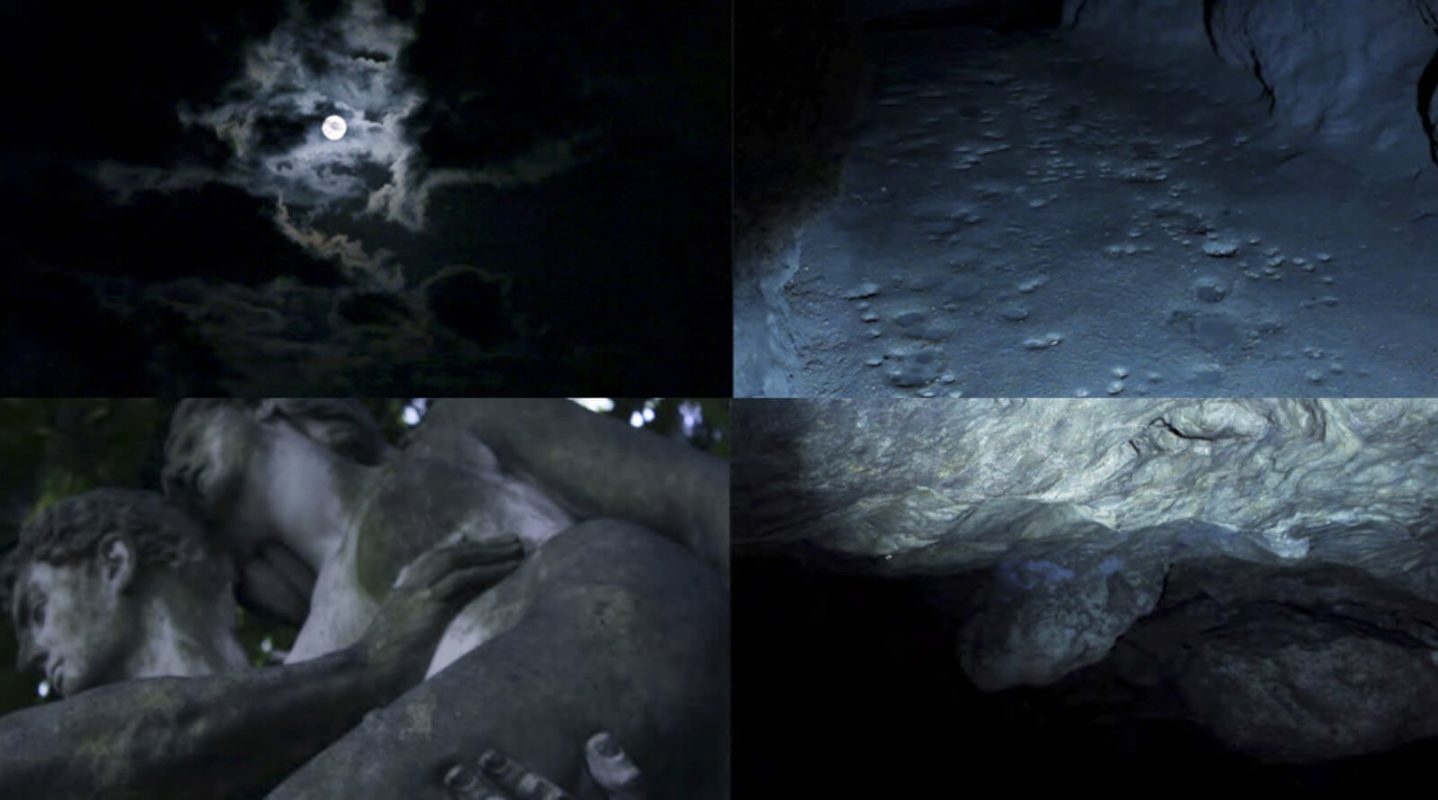 Brad Feuerhelm: Could you explain to us your process as it revolves around the ephemeral additions to the work. Do you reference images from eighteenth and nineteenth century French schools of paining? I see a beautiful symmetry between you, Gustave Courbet and Jean-Auguste-Dominique Ingres. Yet, I also have a feeling of loss when I turn from your work. Is this a projected issue of mine, or does the fictional/non-representative slough of images best sum up these aspects of the viewer’s projection? Are you my remote viewer when you make these images?

Esther Teichmann: Usually I do not refer directly to reference material and I have not really worked directly from specific works. In the recent artist book I worked on, Drinking Air, I included material that I am influenced by, pairing images afterwards and playing with juxtapositions.

All my work is set within a fictional space, which is closer to how I see the world with closed eyes. Whether within the studio, in sets or in bedrooms, or even jungles – all the spaces have the magical feeling of the tents children build, light filtering through coloured blankets transforming reality. The spaces inhabited within the films and images are womb-like liquid spaces of night, moving from beds to swamps and caves, from the mother to the lover in search of a primordial return. In some way, all the images are more about myself than the subjects depicted – they are always bodies I desire, bodies close to me, whether family, lovers or friends. The lover and the artist turn their beloved, their subject, into an object, and within this shift a kind of violence occurs, complicating this meeting further, drawing the other, now object, into an auto-erotic, fetishistic relationship. The condition of artist and lover is one of projection, of idealised and imaginary, narcissistic image; this representation is now one’s ‘truth’, the imagined and real no longer separable.

I am drawn to works, which explore human relationships and look at desire and loss as bound to one another. I am fascinated by what we can never know about the bodies and subjects we desire, about the mother and lovers’ lives before we knew them, and the people they are when not with us – it is within this context that I am interested in the fantasy of the other. Throughout my practice there is the slippage and confusion between loving an image, a fantasy in place of it’s subject. It is the violence, the shame and the necessity of momentarily putting the work, the image, before the person, that haunts me repeatedly. For an instance I love and need the image so much more than this other standing before me – it is their image I am grasped by, their image I am transfixed and engulfed by as they themselves recede, becoming invisible. This very gentle undoing of the other, of transforming them into image and object, is a demand for them to give themselves up to me and to the image.

BF: Can you elaborate whether your interest in photography is specific to the medium? And why? I know you also make video, which in some way, I believe relates directly to the still image in your work. The film is very still, and has these lucid and dark moments in twilight or dusk culled from the edge of sleep or the liminal spaces between. The videos certainly have the sense of static from a still, yet underneath is this continual pulse. It is a quiet pulse, but it lives differently. Can you explain the shift to film works? It suggests a certain sort of narrative development perhaps more obtuse in the still works from Drinking Air.

ET: My relationship to the photographic image, whether still or moving, is less connected to the idea of delivering transparency or of a copy, rather, the camera and image function here as metaphors for subjectivity, memory and desire. The real is transformed from one thing into another in a magical totemistic process, fracturing any claims of the photograph as evidence. Momentarily photography delivers the perhaps universal and timeless desire to become one with another, sought within the lovers’ embrace. I fall into the image, into the projected, miniature crystalline glow of the body I will lose.

The apparatus makes this possible, makes loving pictures and picturing love a vertiginous extended moment of absolute proximity and distance at once. Image has replaced the actual loved body, flesh fallen away in place of this more exhilarating fiction. Photography here is an apparatus of fan­tasy driven by desire; the desire of the artist, the subject and the viewer. Within this story (within the film) and these images of love, the work of art remains within a perpetual process of becoming, the bodies of desire never quite imaged or captured, forever eluding the present, always already lost.

In my sketchbooks I have always written fictional texts alongside the image making, and drew on top of and extensions of the photographs to plan further set constructions and new images, then realized this was as much the work as the ‘final image’, so began including reference material, collages, etchings and painting into photographs and film pieces with voice-over narratives in my process. This crossover between the photographic and other media is something I have always worked with and perhaps is a reflection of the works I am drawn to and look at within my research.

BF: A sense of femininity also pervades the work. Would it be possible to draw a line between the themes of ageing, mothers, and environment? The matriachical figures seem to be the most comforting, the least ominous, the least directed of your sitters. Is this interpretation of clarity within the mother figure something you intended on?

ET: The maternal body as lover, as home and origin echoes throughout the work, at times almost invisibly, yet is always there. The mother’s and lover’s bodies evoke the illusion, that to survive without the existence of the other would be an impossibility. Both bodies remind us precisely of our own separateness; exactly at the point of contact with the other, we become most acutely aware of our own skin, our own boundaries. These ideas of an impossible return, of grief and a sense of inherited homesickness, return us to the womb, to the original home of mother and beyond. This image of otherness hails the maternal as an image of escape, a place to travel to: backwards and towards.

BF: Speaking of origins and the idea of all things returnal, could you give us some insight into your own family and beginnings?

ET: I grew up in Weingarten, a village in southern Germany in the Rhine valley near the French border. My mother is American, my father German – they still live in the same house we were born and grew up in. Both were academics although not within the arts (literature and engineering), so our house is filled with books and we didn’t have a TV (quite tragic for a child when everyone else does). Reading was one of my escapes from the world, as was cinema which I went to often from an early age with family or friends, (as well as swimming, saunas, spending days and evenings at the lake with my best friend floating on lilos and talking for hours, dancing, driving through the night with my high school lover).

Our house is a big renovated farmhouse in southern Germany with lots of open space and a barn and workshop with endless material to work with. My mother loves restoring furniture and saves everything, so all sorts of broken things were rescued and dragged into the house, making for great props for building structures. I used to make things from the remnants on the floor in my father’s workshop. I still love looking through the cloth trunks and cellar to find props for shoots. You can endlessly rediscover forgotten things. My sisters and I are really close and we always slept in one bed in my little sister’s room (even though we each had our own room). They now have children of their own and are incredibly open and generous with making me a part of their experiences of motherhood, which has been an incredible part of the last few years, an intensity of love which is so unexpected and overwhelming. The physical relationship to them and to my mother, and the slippage between being mother, lover and sister is present within all my work. I go back to my hometown regularly and make part of my work there, using the swamp and cave landscape as a backdrop to stage narratives within.♦

Esther Teichmann was born in Germany in 1980. She was listed in Art Review’s top 25 artists in 2005, the same year that she received a MA in Fine Art from the Royal College of Art where she later completed a PhD project. She currently lives and works in London as a senior lecturer at the London College of Communication/University of the Arts London.

Teichmann’s work has been exhibited and published both within the UK and internationally. She has had group exhibitions in London, Los Angeles, Berlin, Mannheim and Modena, as well as solo shows in the UK, Australia, Germany and Switzerland. Her photographs have appeared in ArtReview, Bedeutung, Dazed & Confused, The Guardian, Wallpaper*, Time Out, Source, O32C amongst many others. Her work has also been featured in Francesca Gavin’s book, 100 New Artists, published in English by Laurence King and in Germna by Prestl Verlag and she has just published her first monograph, a limited edition book titled Drinking Air.

All images courtesy of the artist. © Esther Teichmann