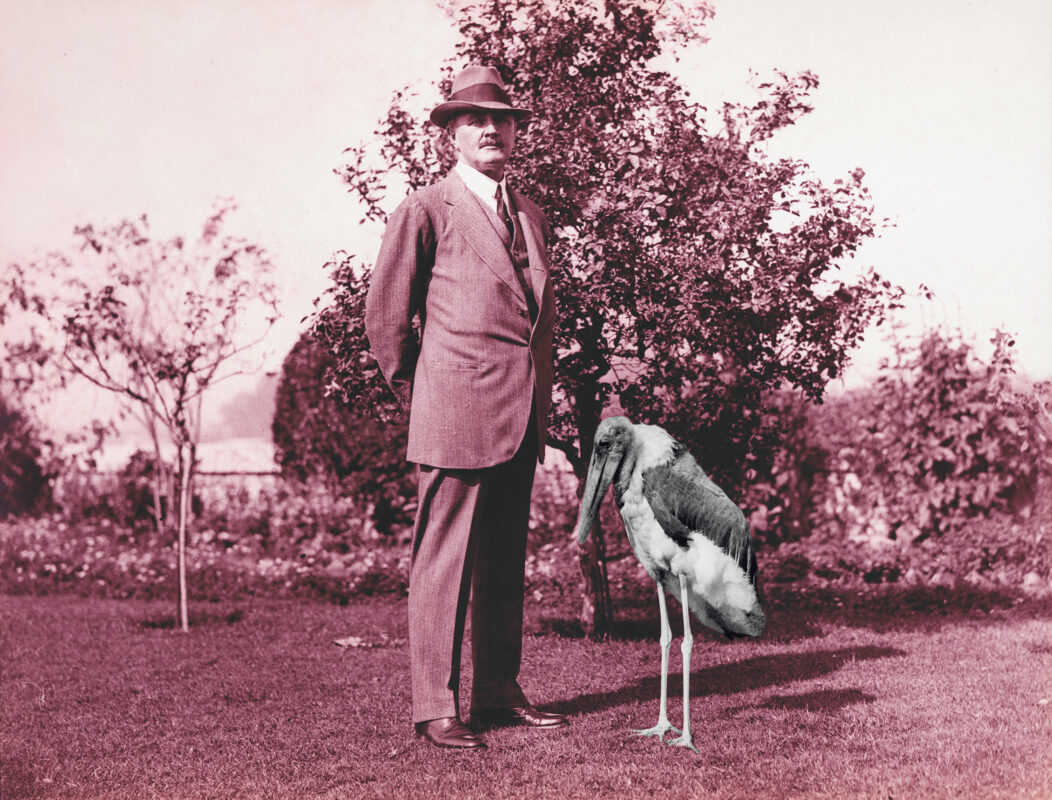 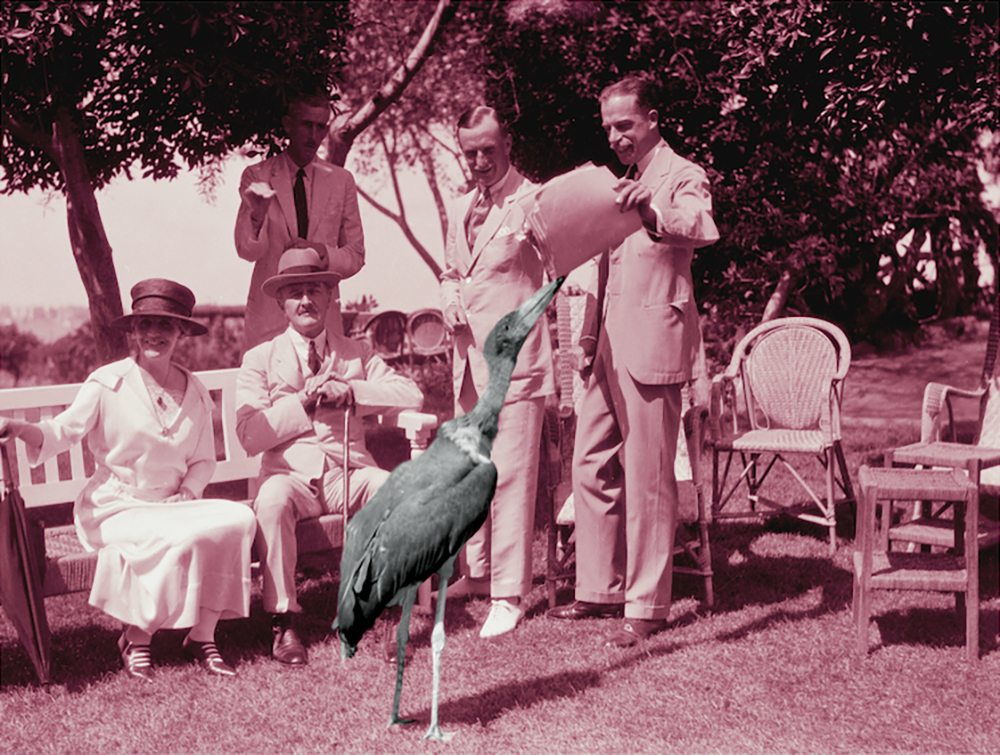 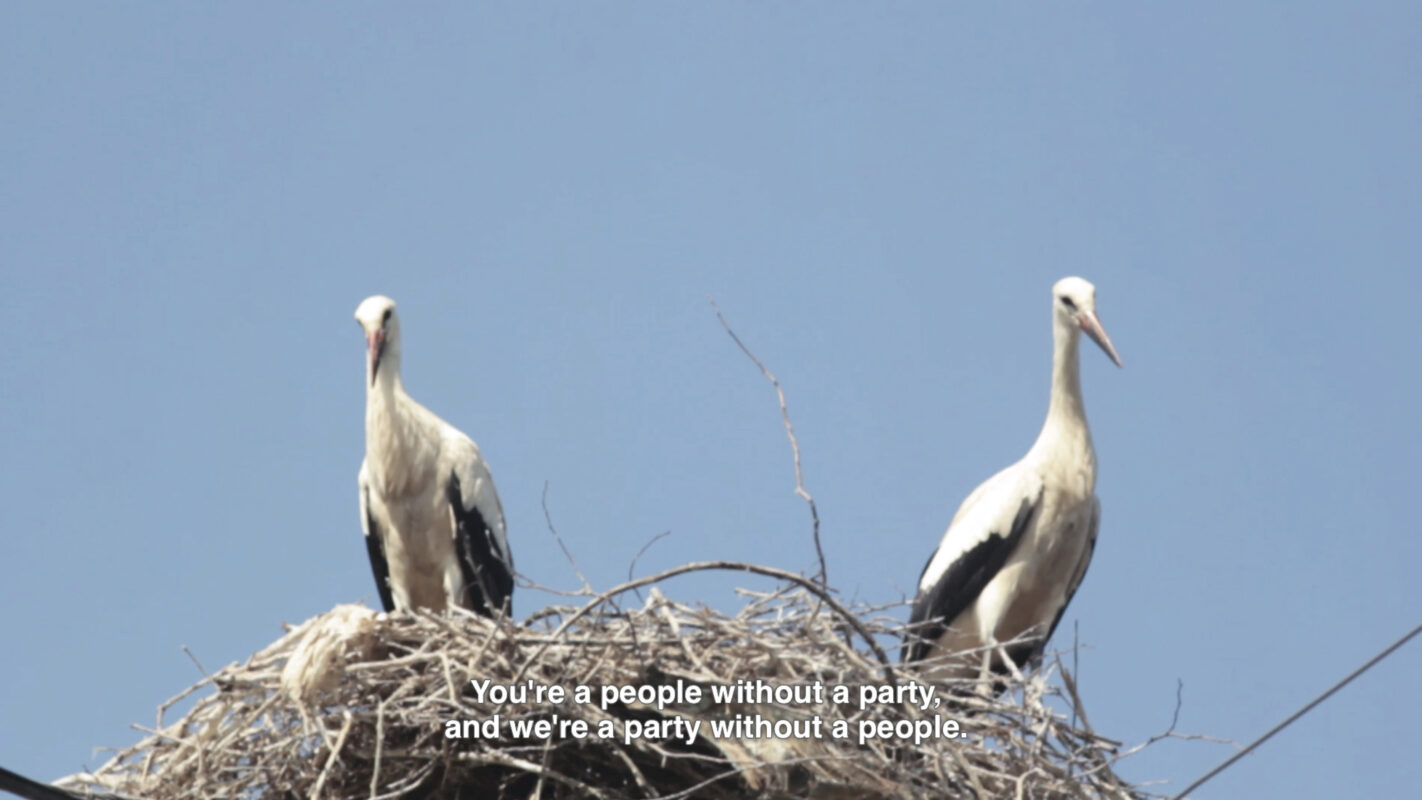 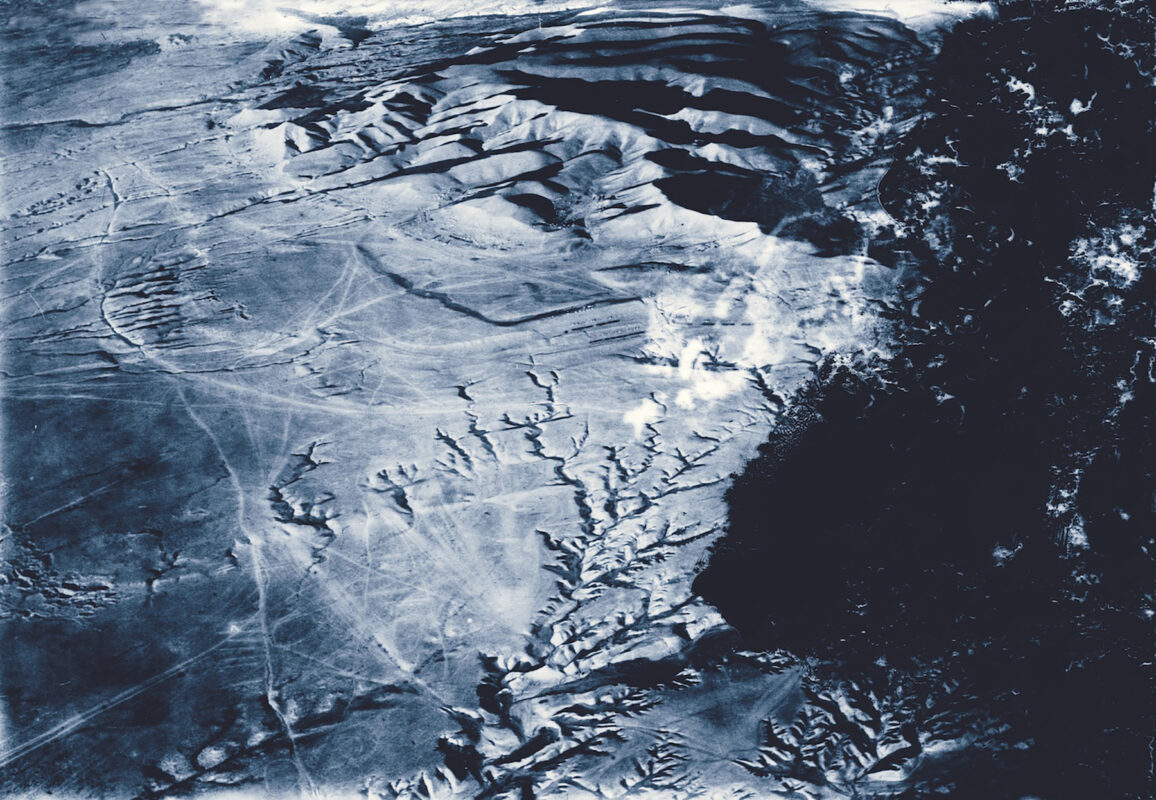 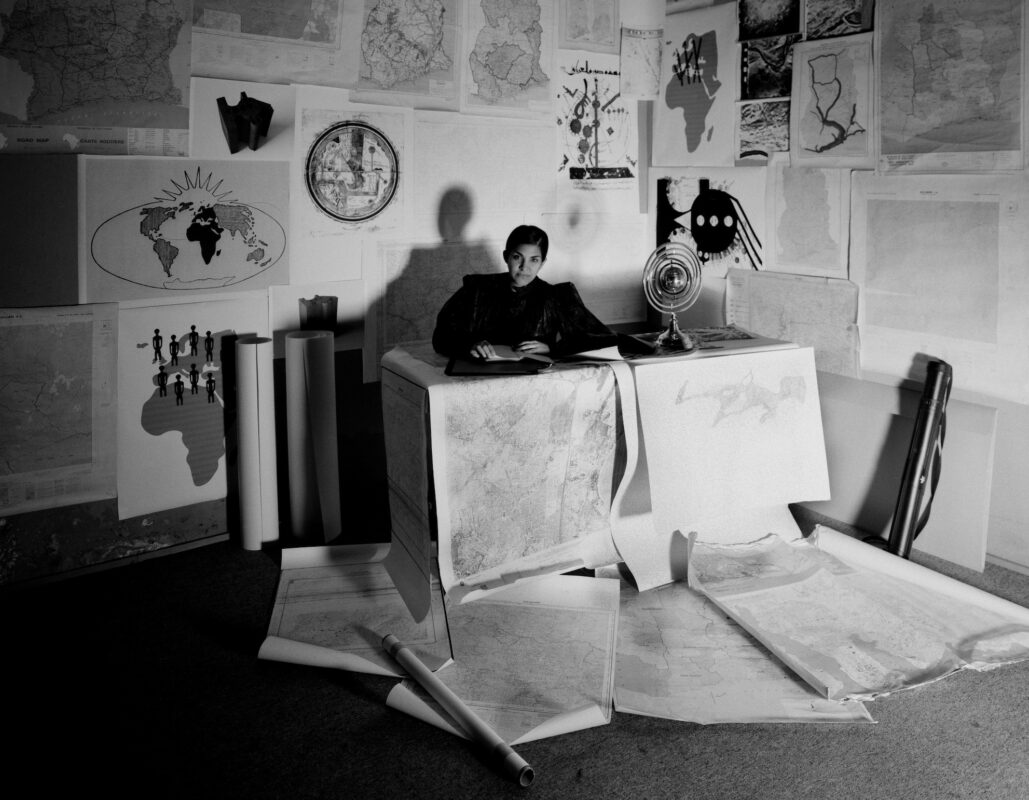 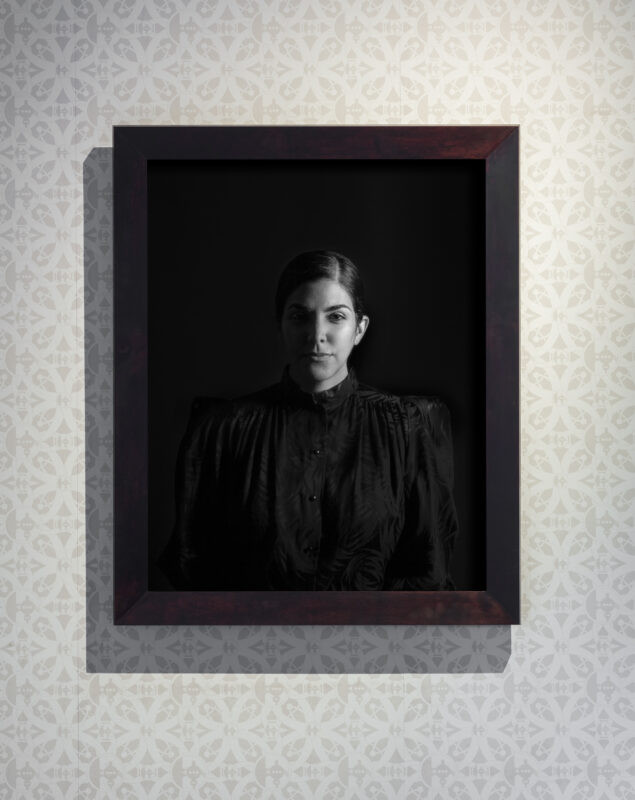 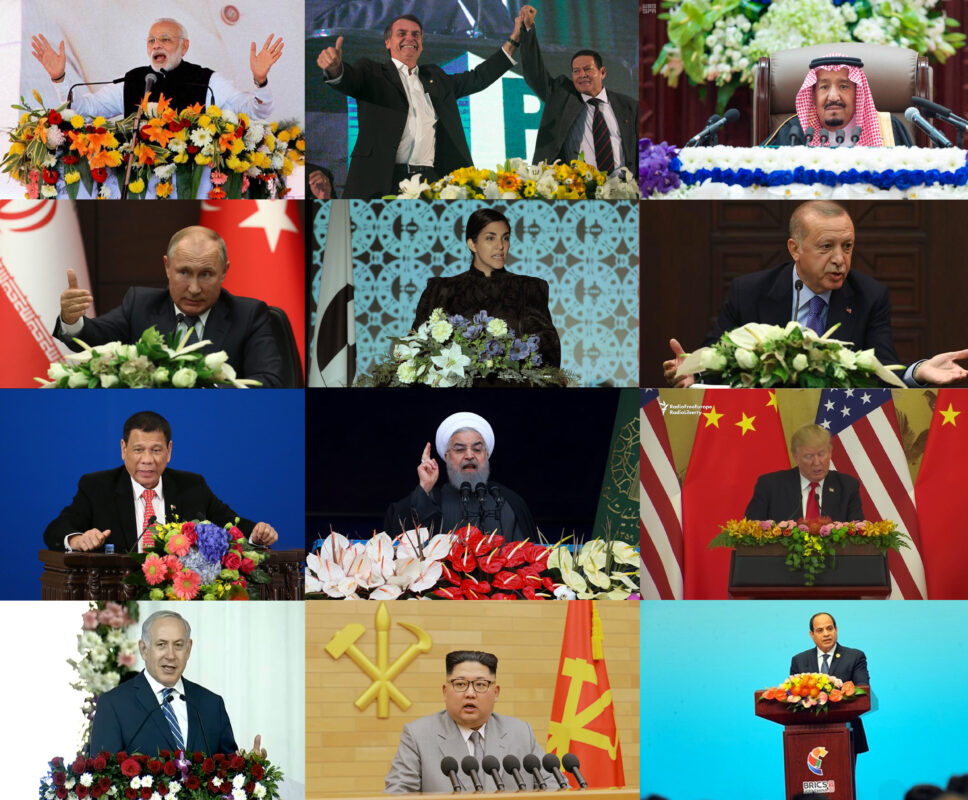 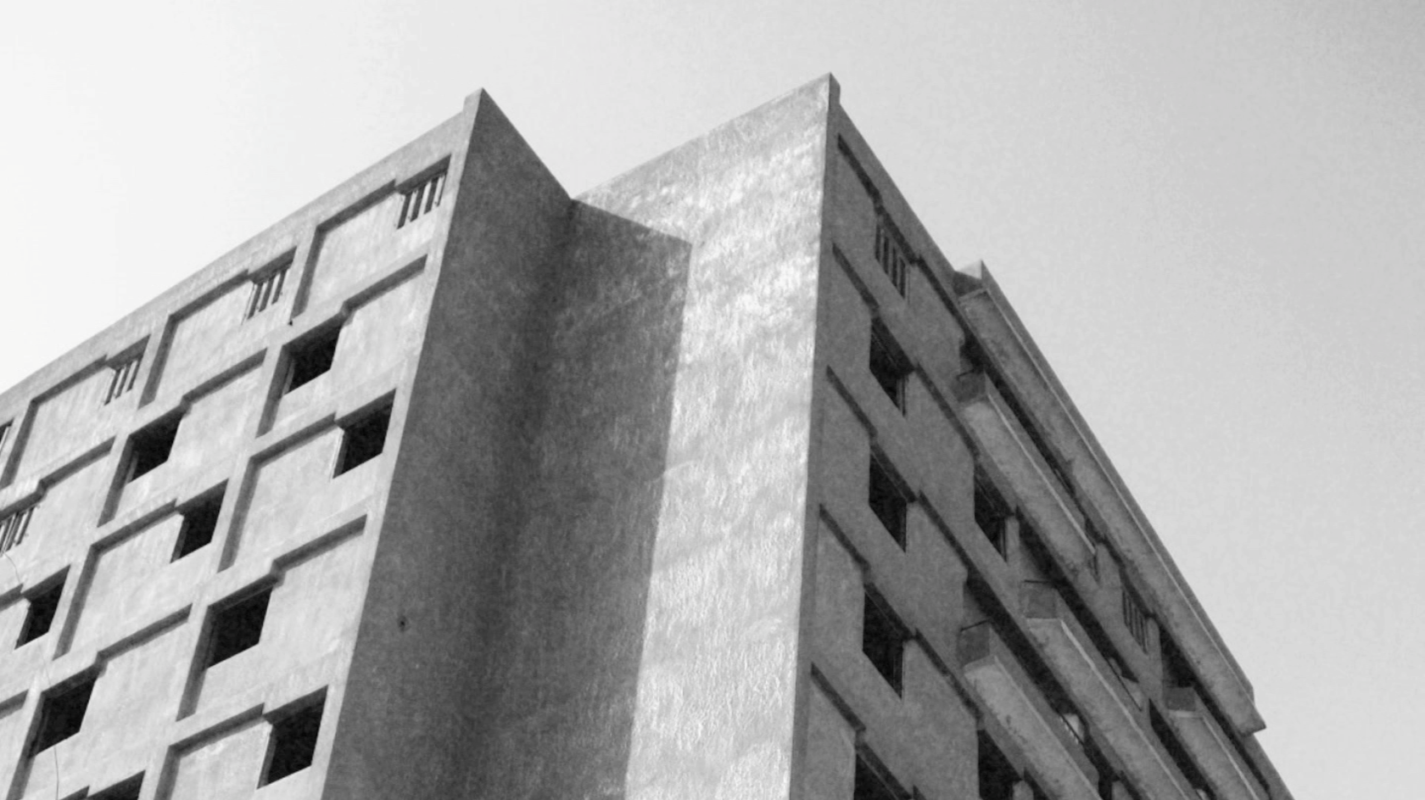 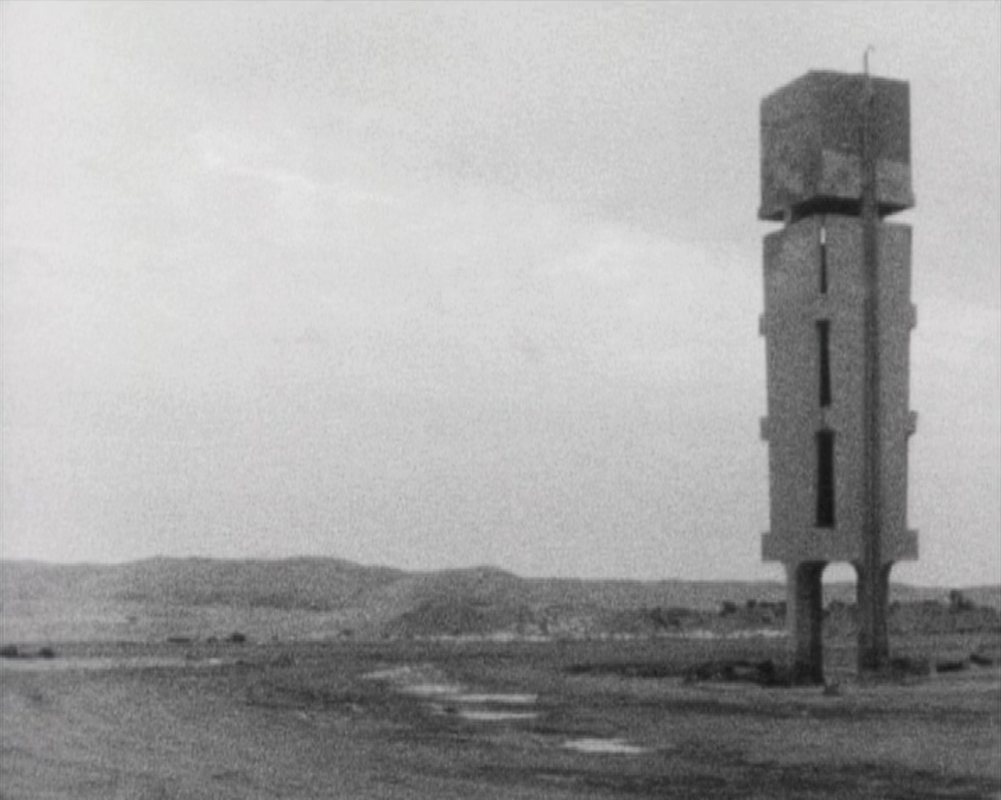 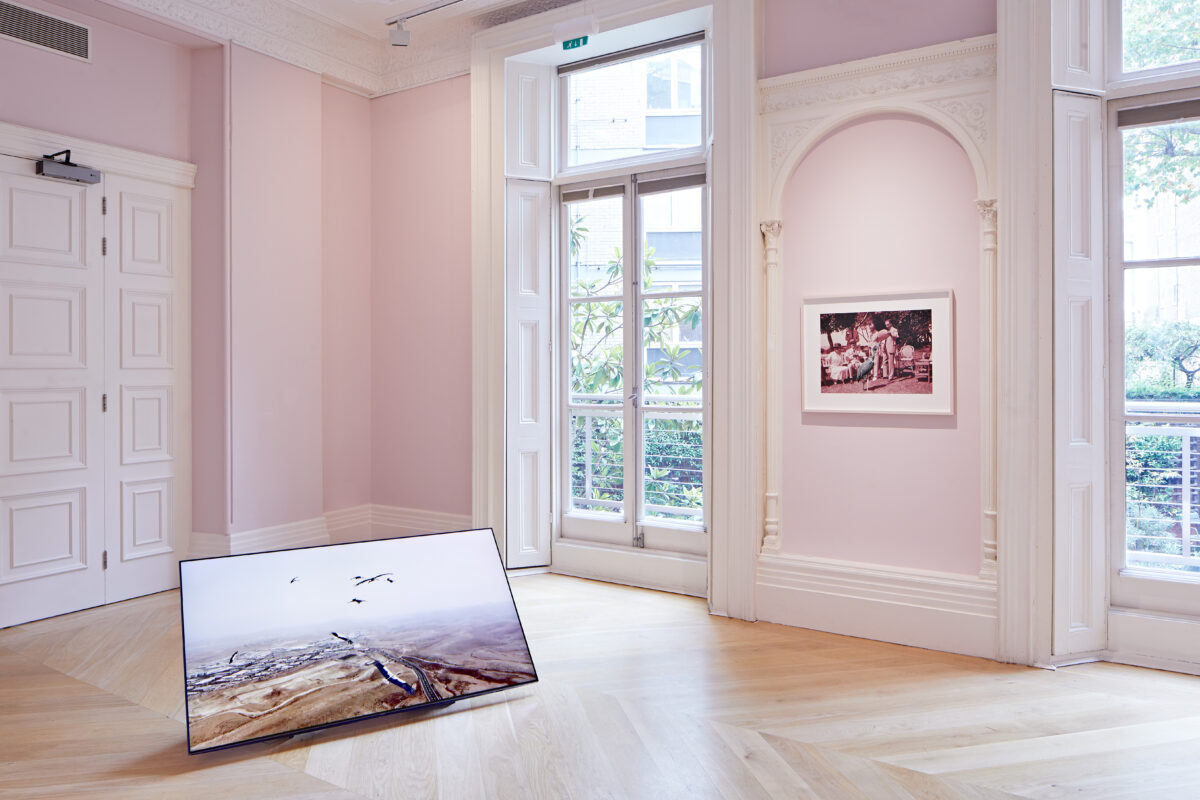 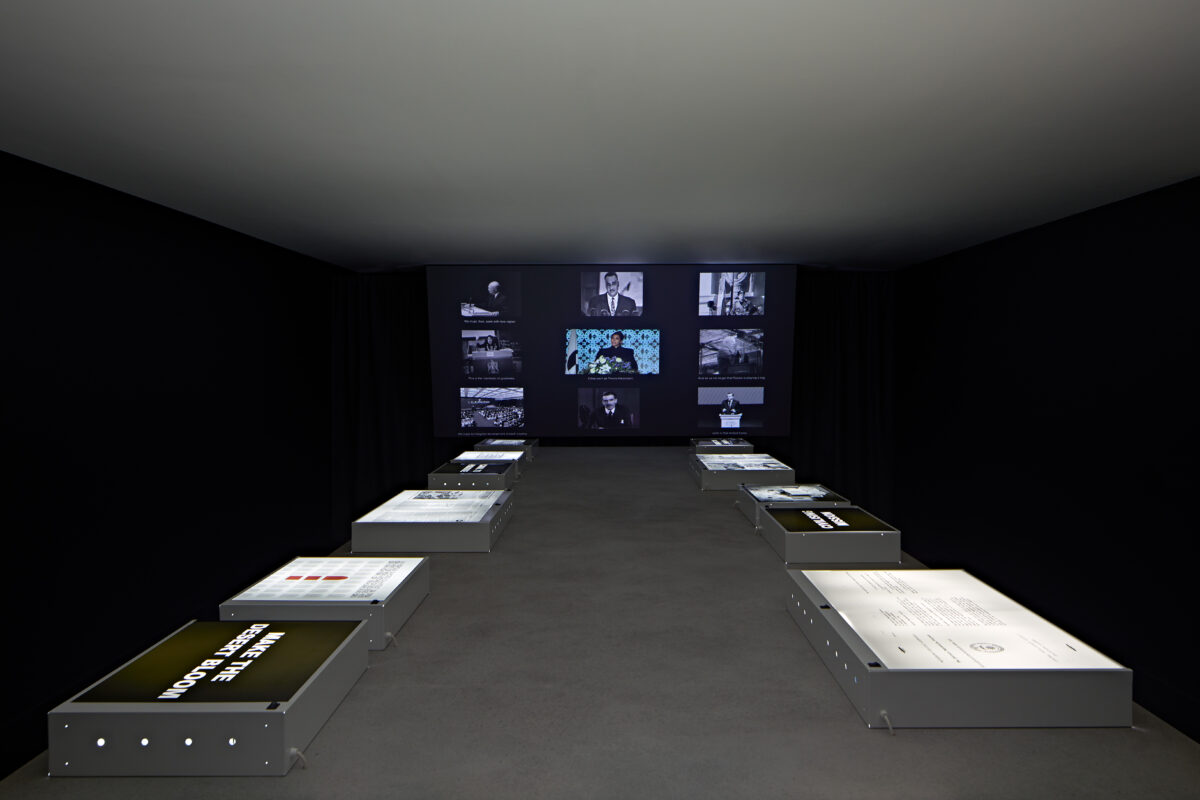 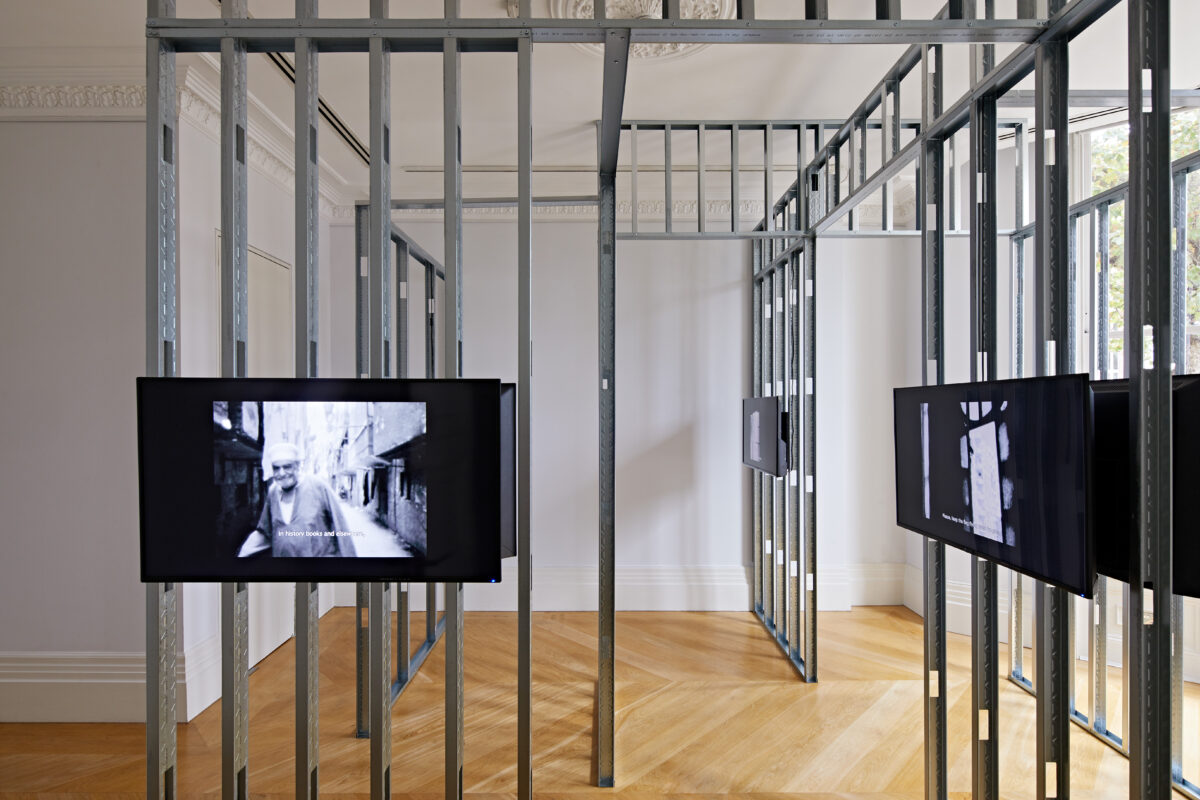 When I see the future, I close my eyes

Alex Merola examines Heba Y. Amin’s investigation into the ubiquitous shadow of surveillance that prevails over the Middle East, giving rise to the fear of the skies above.

In 2013, an Egyptian fisherman spotted a stork with an electrical device, resembling a camera, strapped to its leg. Fearing Israeli tampering, he reported the bird to police officials and it was detained on suspicion of espionage. It later transpired that the “camera” was, in fact, a tracking instrument used by Hungarian zoologists researching the stork’s migratory habits. Foreign media outlets quickly reduced the episode into an absurdist spectacle, but there was something more profound at play; for no paranoia is borne out of thin air. From where, then, did such a paranoia – so consuming to trigger the conspiring against a “spy stork” – arise?

Almost one hundred years earlier, British Prime Minister David Lloyd George ordered Lord Allenby, Commander of the Egyptian Expeditionary Force, to seize control of Jerusalem. Supposedly turning to God for guidance, Allenby found inspiration in Isaiah 31:5: “As birds flying, so will the Lord of hosts defend Jerusalem; defending also he will deliver it; and passing over he will preserve it.” He launched planes over the city, instructing pilots to drop flyers demanding in Arabic: ‘Surrender the city today! Allenby.’ Yet unbeknown to the Commander, ‘Allenby’ can only be translated in one way: ‘Prophet’. The Turks, who were believers in the prophecy that their Holy City would not be lost until a man of Allah came to deliver it, surrendered without firing a shot. The campaign put an end to 400 years of Ottoman rule in Jerusalem, setting the foundations for modern Israel. Triumphant in his fulfilment of Biblical prophecy, Allenby returned to his villa in Cairo, eager to pose for the local press. However, he was not alone. By his side, he had a new companion: a “pet” marabou stork.

In her exhibition, When I see the future, I close my eyes at The Mosaic Rooms, London, Egyptian artist Heba Y. Amin has drawn on this disquieting chain of events – bound by the avian augury – to trace the ubiquitous shadow of surveillance that prevailed over the Middle East thereafter, lending its skies an air of menace. On an upward-facing screen in the centre of the floor, Amin presents As Birds Flying (2016), a film splicing contemporary drone footage scanning contested territories with reconstructed audio sequences from Adel Emam’s political satire, Birds of Darkness (1995): “Is it your first time on top?” Towering on the opposite wall are the first aerial photographs taken of the Jordan Valley, Palestine (1900–20). Strategically framed as “untouched” landscapes by American Colony members, these images were subsequently sold to the British government and used to justify the very Galilean settlements as spied on in As Birds Flying. The dialogue between these various works reveals the ways in which such panoptic views from above – whether from a bird, plane, drone or God – can be deployed, beyond evidence, to push forward an ideological agenda. The language of imperialism is inscribed within the technology itself.

However, what is most unsettling perhaps about this collusion between bird biology and human machinery is its elision of the corporeal eye. Charting the osmosis between military and cinematic technologies within the context of aerial photography, philosopher Paul Virilo writes of the quite literal ‘deadly harmony’ that emerges when bombs and missiles are fitted with cameras and ‘open their eyes’.[i] These algorithmically-wired imaging machines, as Anthony Downey posits in the exhibition’s accompanying book, Heba Y. Amin: The General’s Stork (2020), have ushered in their own techno-aesthetic; a regime of viewing that topographically quarters the Middle East only ever as a site of ‘atavistic threat’, thus playing into a self-serving, neo-colonialist aspiration of unending war on terror.[ii] For this reconfiguration, and further securing, of the coloniser’s ‘imaginative command’[iii] over the colonised is a legacy of Orientalism in the digital age; a means of sustaining the West’s own vision of itself. Amin considers whether we can look down on these same landscapes today and extract the Oriental gaze embedded deep within.

In a bunker-like room downstairs, Amin redirects her focus from the sky to the sea. Across a table of lightboxes, archival documents – including engineering plans, maps and newspaper cut-outs – have been repurposed to plot the evolution of Atlantropa, a scheme devised by German architect Herman Sörgel to drain the Mediterranean Sea in order to suture Europe to Africa and construct a new ‘supercontinent’. Although dating back to the mid-19th century, when French officer François Roudaire proposed the diversion of the waters to push Arabs and Berbers south and open up trade with North Africa, Sörgel’s fantasy was embraced long after: Benito Mussolini declared he would ‘make the desert bloom’ by flooding the region, whilst Dwight D. Eisenhower, as leaked by a declassified CIA note, claimed the development of the Qattara Depression’s hydro-electrical potential would be ‘spectacular and peaceful’. Though Atlantropa was never realised, consistent were the ways in which this mercenary colonial project was redrafted, over and over, as an omnibenevolent unification of continents.

“Who were these megalomaniacal men who felt that [the Mediterranean] was theirs to control? Where does that entitlement come from, and what does it feel like?” These questions formed the basis of Amin’s Operation Sunken Sea (2018), which is projected onto the room’s rear wall. Stitching together broadcasted speeches by autocrats, from Nikita Khrushchev to Gamal Abdel Nasser, Amin unnervingly inserts herself in the centre as a quasi-dictator. She hijacks the grandiloquent rhetoric, gesturing and aesthetics employed by her predecessors, in turn satirising the staged elements of such modes of public address. However, pledging to feed the hungry, provide employment, end the migration crisis and pay reparations to Africa and the Middle East, Amin’s Mediterranean-draining proposal beckons a parallel era of human progress. Her blue-sky-thinking borders on the bizarre, but, upon learning her speech is mashed-up from actual quotes by fascists past and present, we are confronted by our own immunities to such masteries of the mechanics of propaganda.

Given that land-altering visions, as exemplified by China’s “New Silk Road”, Turkey’s Istanbul Canal and Saudi Arabia’s cross-border city Neom, have become alarmingly commonplace, Operation Sunken Sea scrutinises not only the continuation of techno-utopian – or indeed dystopian – imaginings, but also their normalisation through systems we are unable to think beyond. After all, stood at the podium, Amin finds herself complicit within a necropolitical logic – as internalised via the broadcasting apparatus – whilst asking: what happens when narratives are flipped by an African-Arab woman? One lightbox displays Sörgel’s portrait from Time alongside Amin’s own restaging of it (the latter now appearing after an Internet search of the German’s name), whilst another shows a map of the Mediterranean by the 10th century Persian geographer, Al-Istakhri. The water is rendered as positive space, and the surrounding land negative; a radical reversal of contemporary Euro-centric conceptions of the Mediterranean as a border impeding the movement of migrants from Africa.

Amin’s interest in tactics of subversion extends into the exhibition’s third body of work, Project Speak2Tweet (2011–ongoing). On 27 January 2011, three days after the Egyptian revolution began, the government put the Internet to sleep. In reaction, Google programmers developed @speak2tweet, an online rallying point in which citizens could dial in and post voicemails to Twitter through SMS. Amin has delved into this aural archive (no longer publicly accessible), juxtaposing the voicemails with video footage of Cairo’s failed architectural projects. The result is an elegiac and near-hallucinatory conjuring of the collective psyche of a people who were unplugged, yet not silenced. Here, their digital footprints are grounded within the urban realm, echoed by the room’s arresting steel bars on which the screens hang. “Please keep the flag flying for me when I’m gone,” records one protestor as he enters Tahir Square, not knowing if he would ever return. Amin’s ever-growing archive seeks to honour this wish; to ensure this slice of history does not disappear into the depths of cyberspace. What does it mean to listen to these voices ten years on? In light of the Egyptian state’s escalation of mass-surveillance and crackdowns on digital dissent during the pandemic leading to egregious spates of incarcerations, the symbolism of the bars is not lost.

In another voicemail, a woman addresses President Hosni Mubarak: “What would have happened if you gave up your greed? If you hadn’t listened to the voice of your devil? If you had invested in your children?” This speculative what if is at the heart of Amin’s When I see the future, I close my eyes (the exhibition title is a lyric taken from the song Excellent Birds which was co-written by Laurie Anderson and Peter Gabriel, first performed in 1984 as part of Nam June Paik’s international satellite “installation”, entitled Good Morning, Mr Orwell). With an eye towards our post-digital future, Amin asks: what if new technologies could, contra to Orwell’s 1984 (1949), indeed live up to their democratic potential? As one of her stork protagonists declares: “From now on, there is a new world.” What might this new world look like from above? Perhaps, Al-Istakhri’s rendition of the Mediterranean Sea, emblazoned on a flag that hangs outside the gallery front, speaks not only of what could have been, but also what could still be.♦

All images courtesy the artist and The Mosaic Rooms, London © Heba Y. Amin

Installation views of When I see the future, I close my eyes at The Mosaic Rooms, London from 1 October 2020 – TBC 2021. Photographs by Andy Stagg

Alex Merola is Assistant Editor at 1000 Words. His writings have appeared in Elephant, Artsy and Photomonitor, and he is currently working as Curatorial Assistant for an exhibition at the Portuguese Centre of Photography, Porto during the Ci.CLO Bienal 2021.