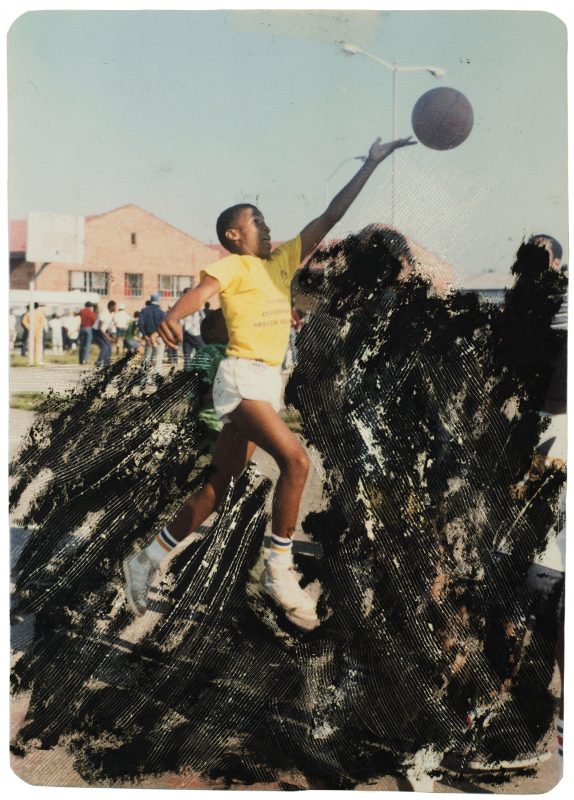 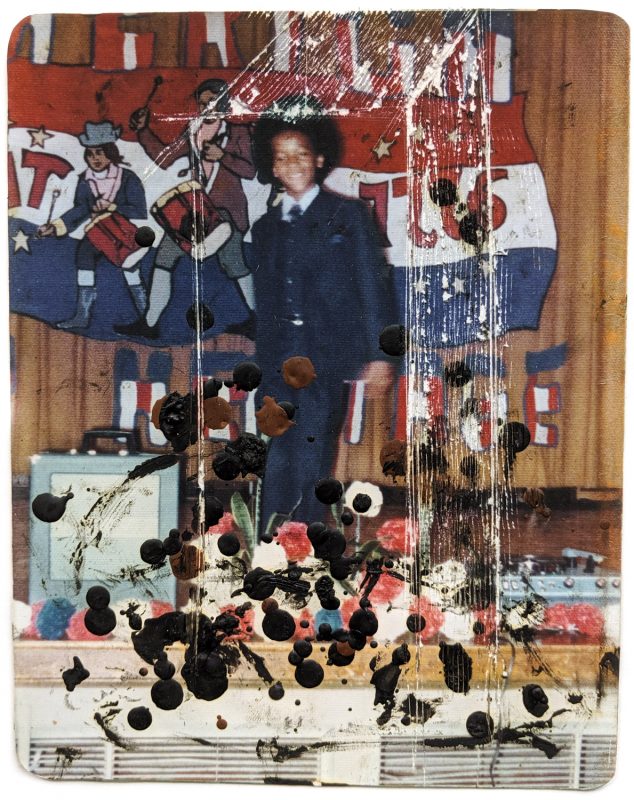 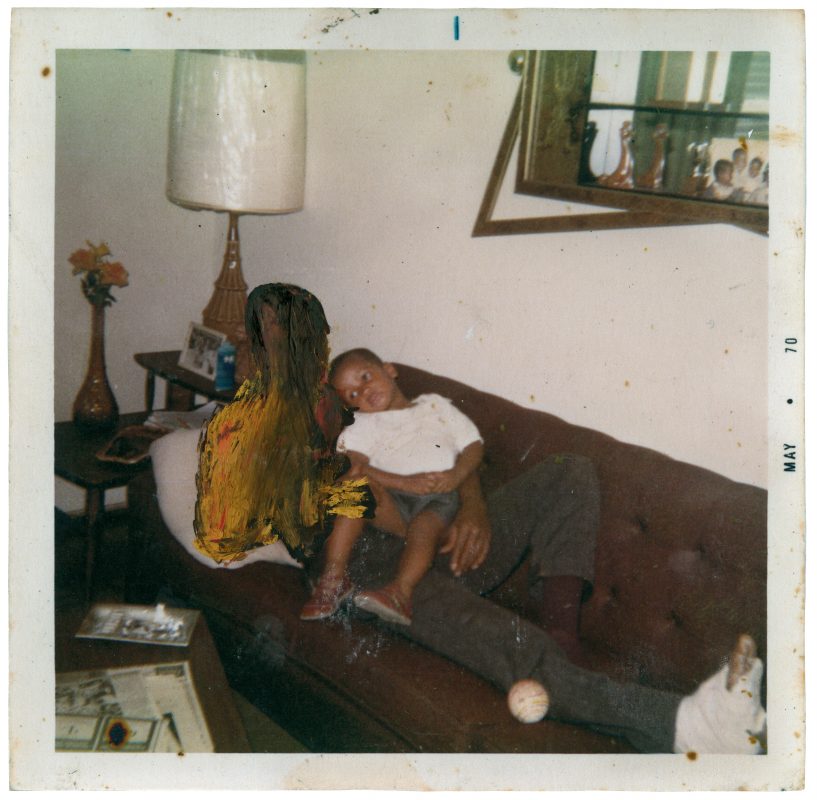 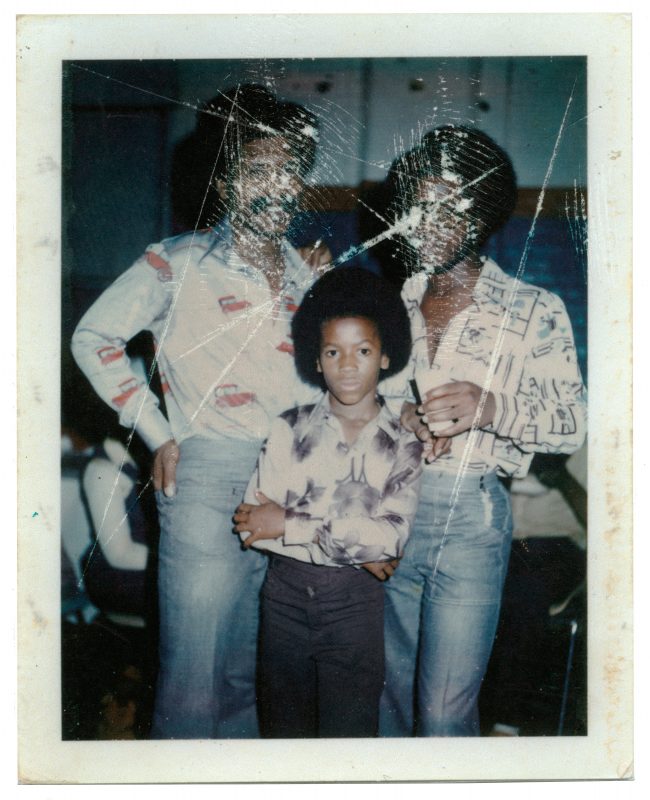 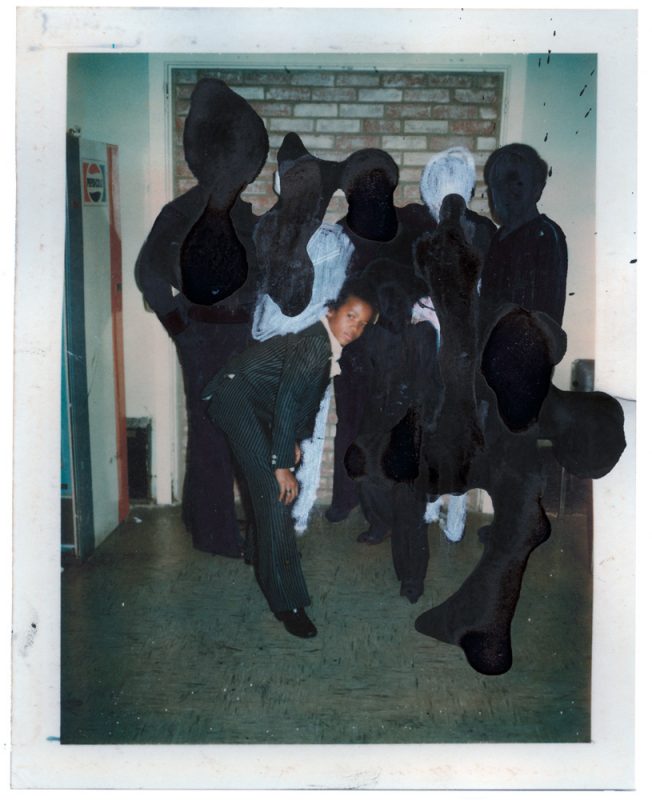 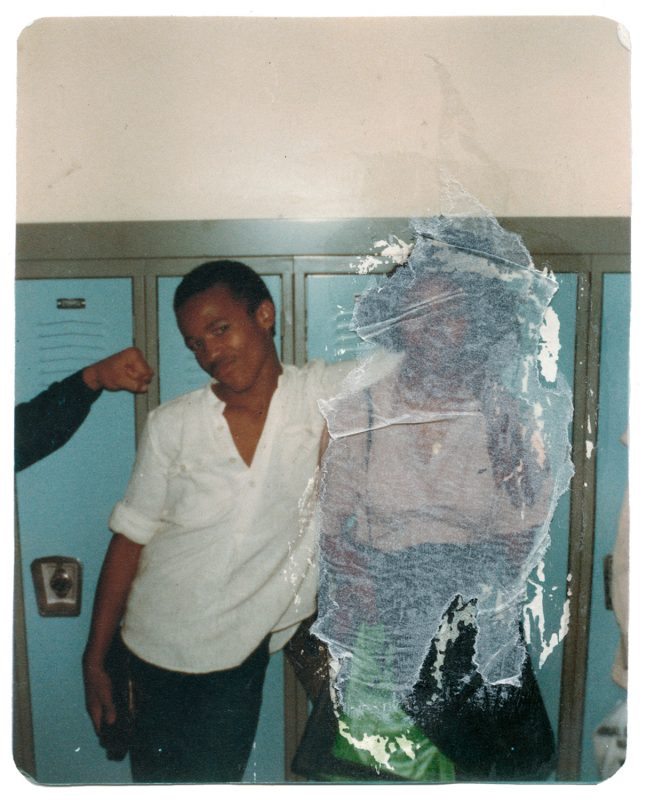 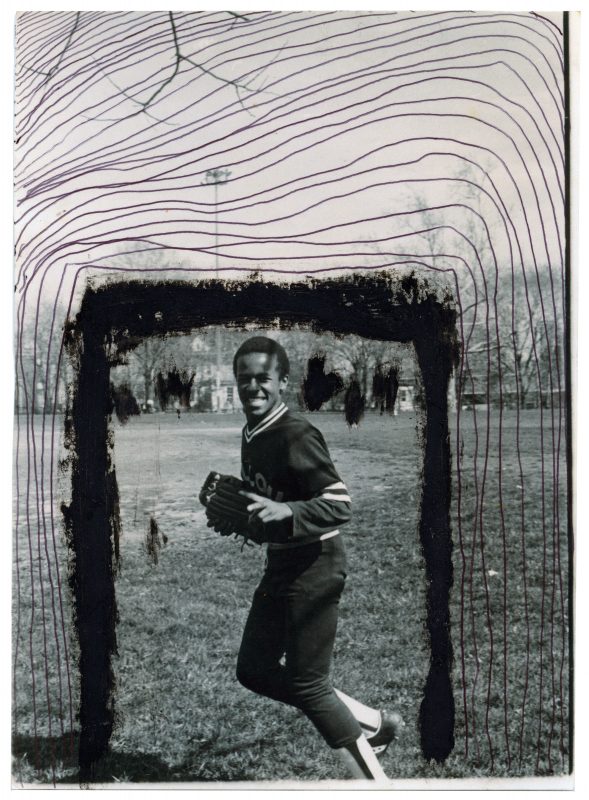 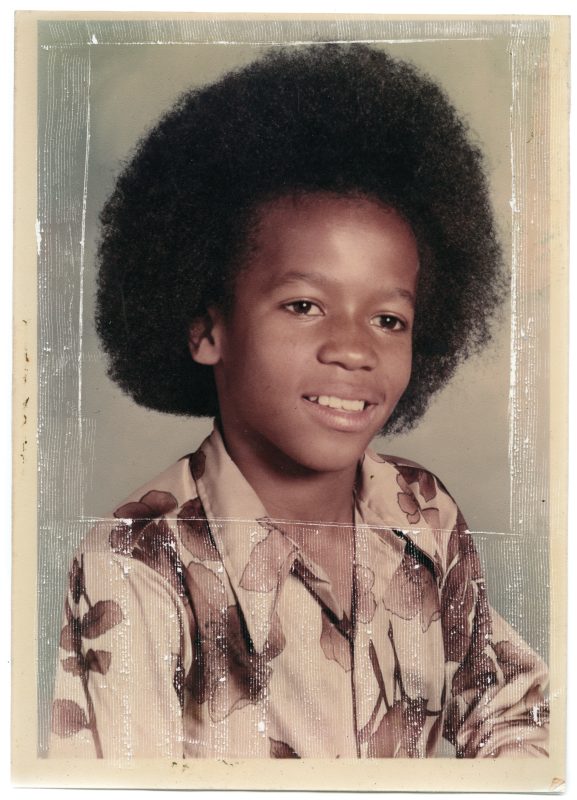 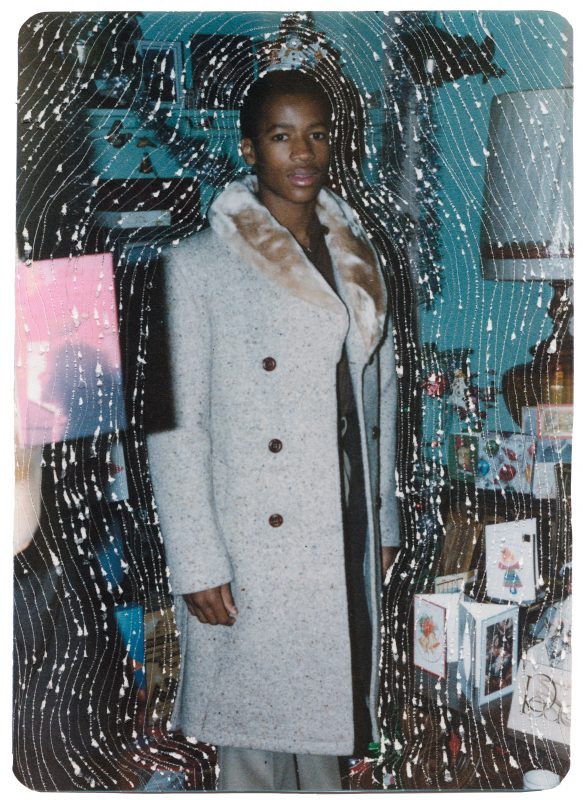 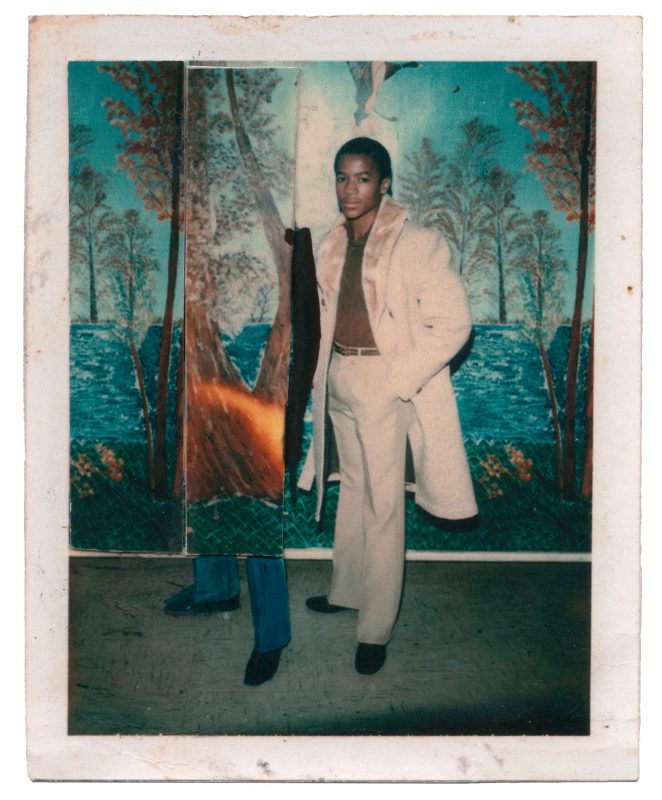 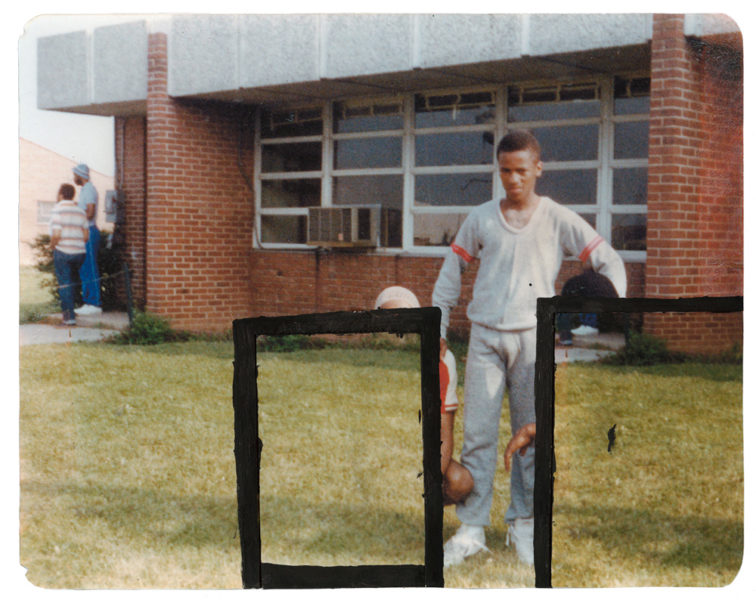 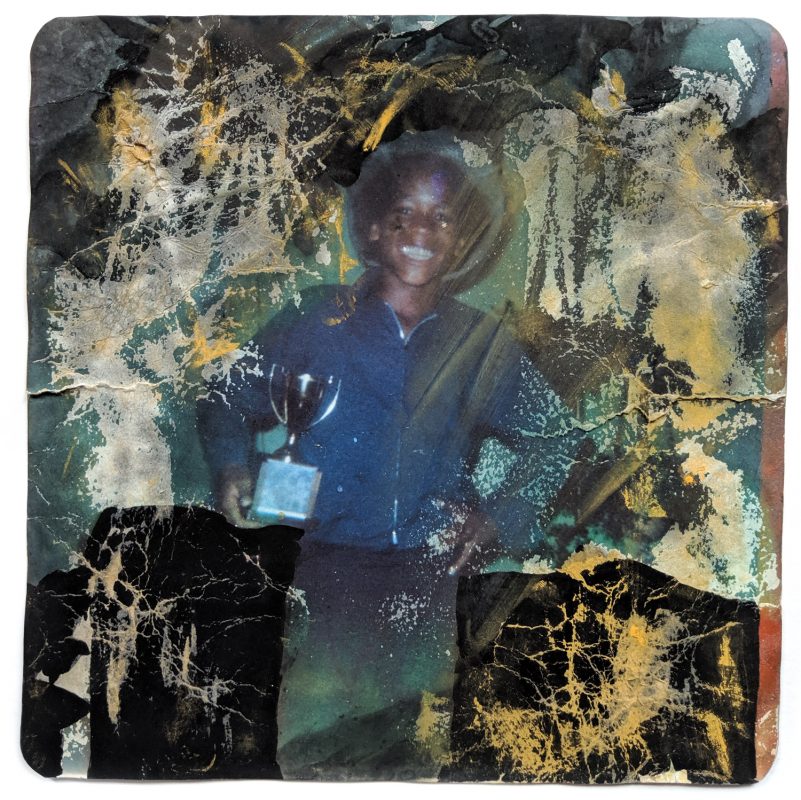 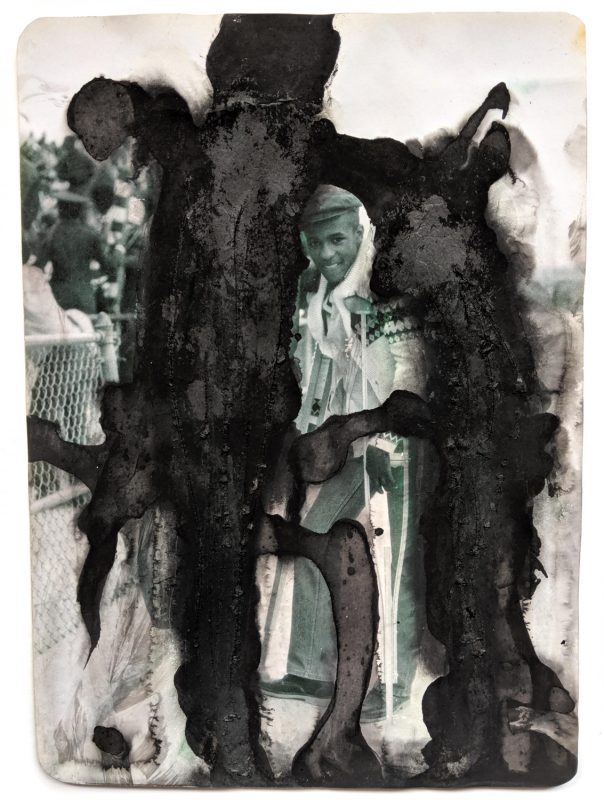 My Dad Without Everybody Else

Looking at Kalen Na’il Roach’s images is an engaging and intriguing experience. At first, they appear like humble bits and pieces of photography, mundane family photographs displaying the proudest moments in life: sport and school achievements, games with friends and family gatherings. Beyond these initial thoughts, their materiality and complex texture indicate wilful acts of vandalism; conscious scrapes and iterative scratches, scribbles in a diary. Jacqueline Woodson’s 1995 publication Autobiography of a Family Photo (and its nifty title) then comes to mind and seems to perfectly condense Na’il Roach’s endeavour. Born in 1992 in Washington, DC, in a split up family, a “partial only child” as he phrases it, Kalen Na’il Roach started using family archival imagery — found in the bag of the Polaroid 600 SE his dad gave him — for his series This Is and This Isn’t My Family. He eventually continued to gather photographs from different family members that then became his source material.

Ineluctably, Kalen Na’il Roach’s work falls within a long legacy of conceptualising how we should think about the relationship between family and photography in African American communities as embodied by the writings of Tina M. Campt or Christina Sharpe. Within this context, photography then becomes central, as stated by Gloria Jean Watkins — better known by her pen name bell hooks — in her essay In Our Glory: Photography and Black Life: “Cameras gave to black folks, irrespective of class, a means by which we could participate fully in the production of images.” In the same text, the author used a photograph of her father, Veodis Watkins, to initiate an in-depth investigation of the links between family photography and its place within African American culture. She described the unique bond to an image of a father that she only half-recognised; the attachment to certain photographs according to one’s place in the family and the mixed feelings these pictorial genealogies can generate beyond the moments pictured. In turn, Kalen Na’il Roach uses his family’s photographic archives as a way of telling his family’s story from his own vantage point, going as far as inserting himself in the narration through appropriation and alteration. Photographs then become tangible bases for the creation of personal histories, and Na’il Roach admits to his critical intervention as “acts of protection, adornment, desecration, correction, concealment, exposition, and so on.”

While many photographers have been involved in projects related to genealogy and filiation — one could think of LaToya Ruby Frazier’s The Notion of Family, to name but one — I would like to argue that we are now witnessing in current, family related, photographic practices a “haptic turn”, that is the physical transformation inflicted on family photographs, leaving the rough and beautiful modifications, to be seen by all. Therefore, it is the adoption and amendment of photographs of family members which particularly interests me in this essay. How, from a few images found in boxes, in dusty albums or on the walls of grandparents, artists and photographers decide to tell their story. The development of a DIY aesthetic, a cut and mix materiality, the alteration of the photographic surface — like an updated resurgence of 19th century Pictorialism — creates a very intimate and direct relationship, firstly between the family archive and the author, then between the final crafted photograph and the spectator. The manipulation of the image strengthens the awareness of touch, a sense of confidentiality and intimacy, multiplying its haptic specificity. I am, for example thinking, of Lebohang Kganye’s 2016 Reconstruction of a Family, Priya Kambli’s series started in 2015 and ongoing project Mami (Uncle’s Wife) and Karl Ohiri’s 2013 How to Mend A Broken Heart. In his series, My Dad Without Everybody Else Kalen Na’il Roach draws, scratches, drip paints, blackens, smudges photographs of his father as a child, a boy and a young man. By doing this Na’il Roach covers up backgrounds and other individuals depicted, highlighting a dedication to the photographic representation of his father. My Dad Without Everybody Else was born out of a process of reconciliation between a loving father, who inspired his son even if away from the household and generated by the messy phenomenon of getting to know a parent as an individual. As Na’il Roach’s father passed away in 2017, the meaning of the series inevitably got changed and seem now to also address grief. Kalen Na’il Roach’s haptic practice resonates as a personal ‘‘contact zone’’ to quote Mary Louise Pratt, an encounter between a charismatic father and a son in need of appreciation. Therefore Kalen Na’il Roach’s work turns into an exercise of power over family histories. Na’il Roach’s appropriation of these ‘‘home made photographs’’, as Richard Chalfen outs it, makes them become objects of self-study or even therapy.

Na’il Roach grew up in an artistic family, his mother’s father was a painter and his father a creative wage earner who used photography to earn an honest penny, and it seems that these resourceful and imaginative role models somehow enabled Na’il Roach to subvert assumed norms. My Dad Without Everybody Else is a poetic dialogue that goes against hegemonic understanding of fatherhood and masculinity. In her 2003 book We Real Cool, Black Men & Masculinity, bell hooks wrote: “Like all men, black men in patriarchal culture have not been raised to be intimate.” Kalen Na’il Roach countered such assumptions as he displayed wounds, pains and fears in order to create a body of work embedded in an alternative perspective and a deconstructed monolithic masculinity.

Beyond such considerations, My Dad Without Everybody Else encloses multiple layers of hidden context that so-called “happy images” such as family photographs don’t care to narrate. Concealed within family stories, dramas are often looked at unknowingly by the spectator.  Twice in the series, Na’il Roach uses the same photograph of his father, as a young teenager, playing basketball and going for a layup. Over and over again team-mates are obliterated, their identity hidden. For an outsider to the family, joy and carelessness emanate from the photograph, for an insider, Lorton Prison in Virginia and its basketball court on family day can be identified. The only one of the brothers not to go to prison, this photograph simultaneously becomes highly painful and highly political. Such a tale unlocks other layers of understanding. Indeed, according to the Sentencing Project, today, people of colour make up 37% of the U.S population but 67% of the prison population. If political bias does not seem to be at the heart of Na’il Roach’s work, it undeniably hovers over some of his images. Born in the early 1960s, Na’il Roach’s father grew up in the 1970s and 1980s at a time when some men fought against stigma and racism by paying particular attention to their looks. Decades later, his apparel and by extension Na’il Roach’s project emphasise the complexity of North American society: one the one hand embodying the American Dream through wearing sport jerseys and baseball glove while on the other embodying the codes of Black Dandyism via a white fur coat and a dapper, striped suit. ♦