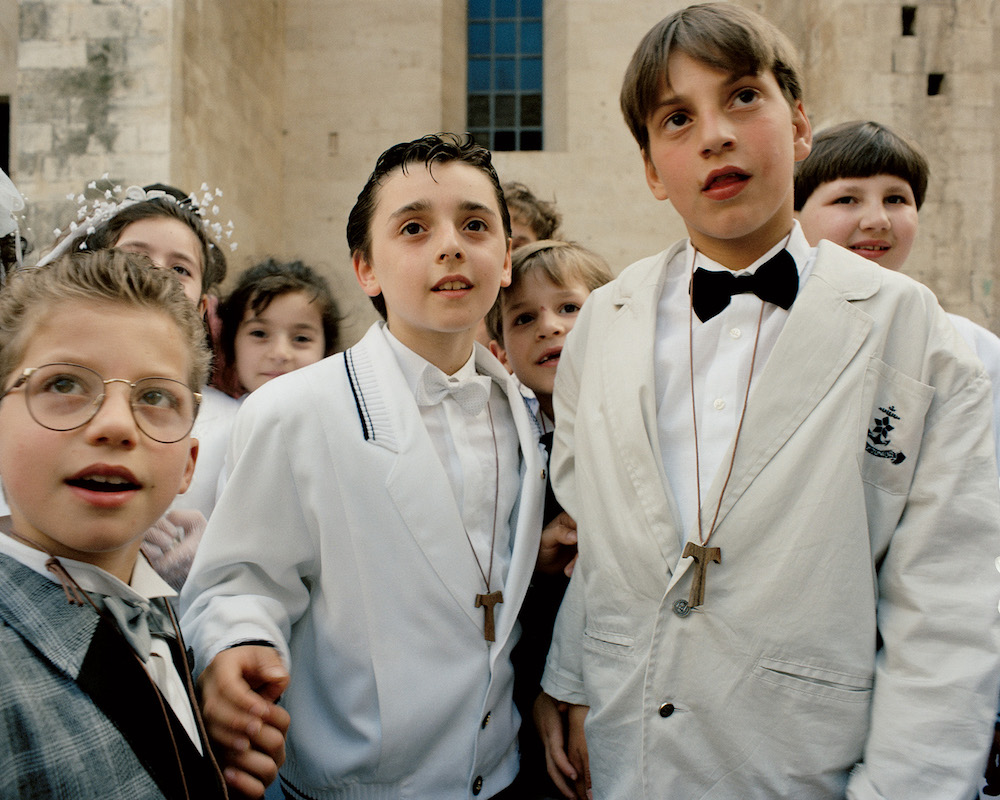 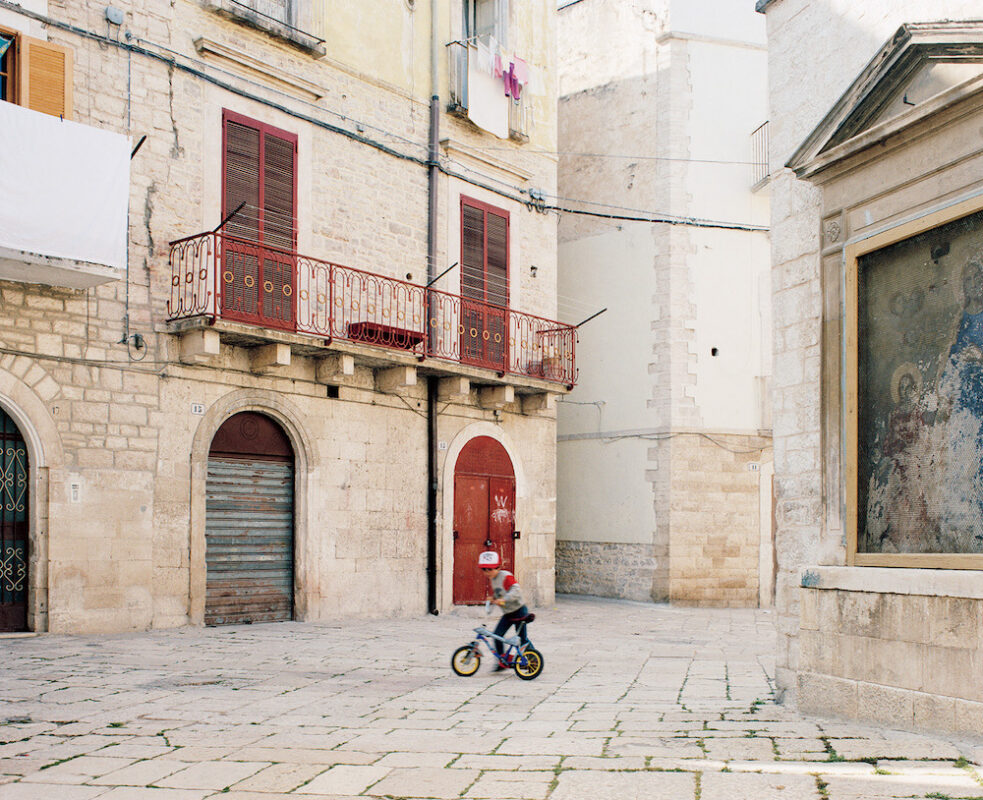 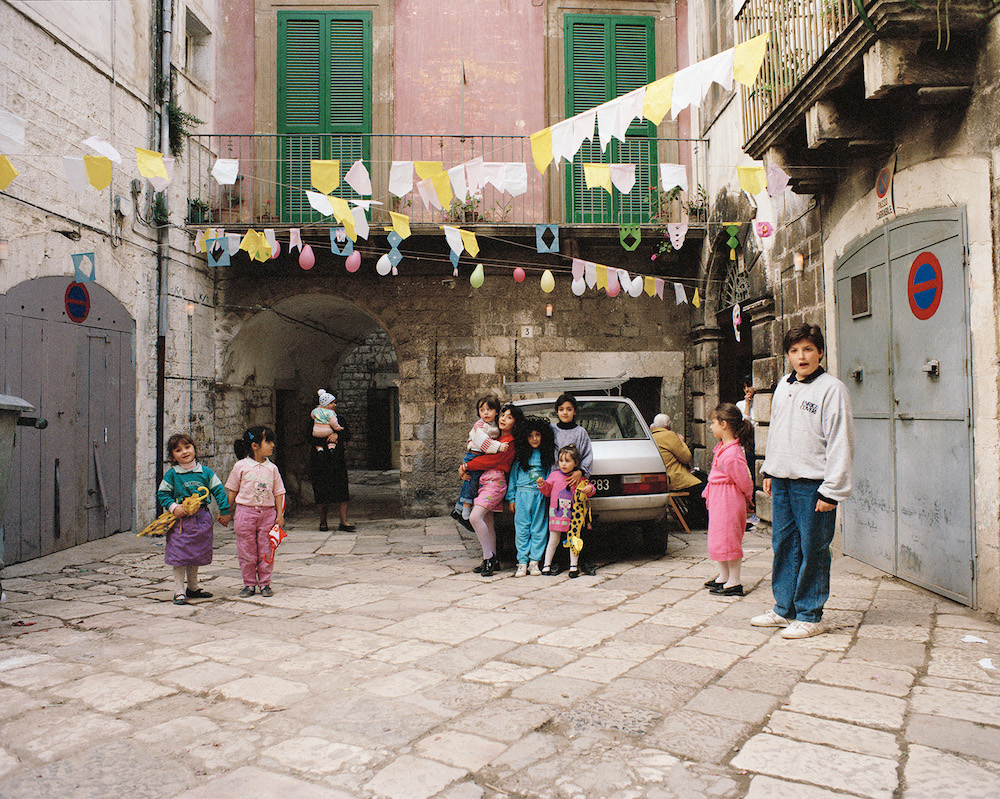 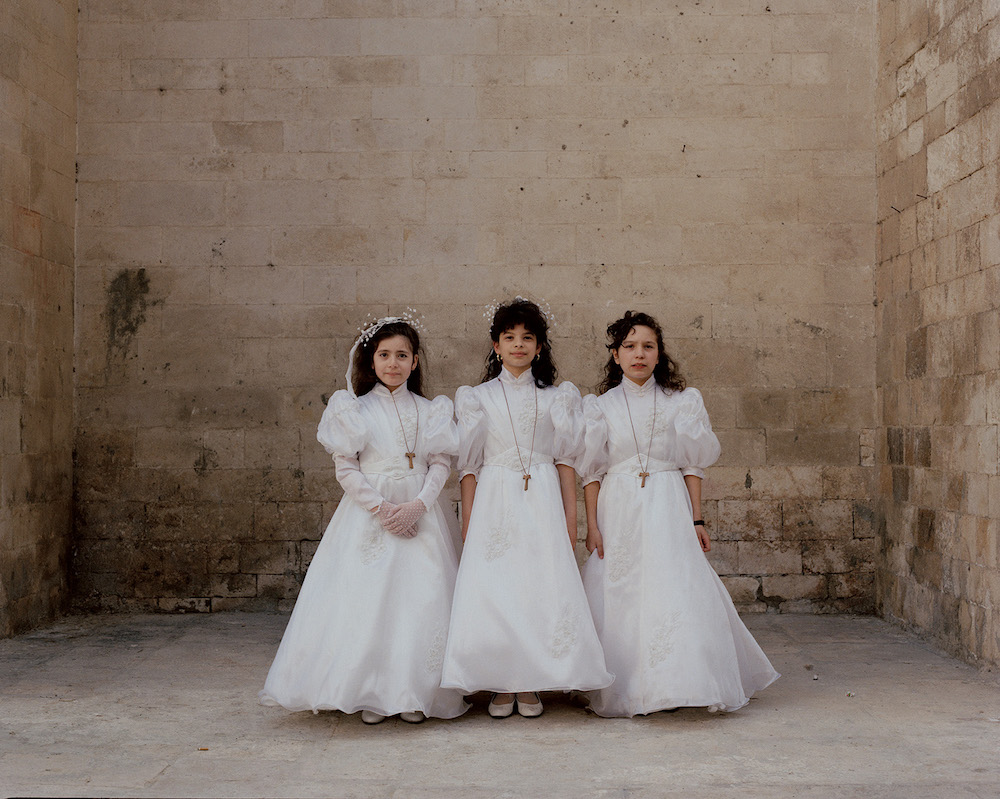 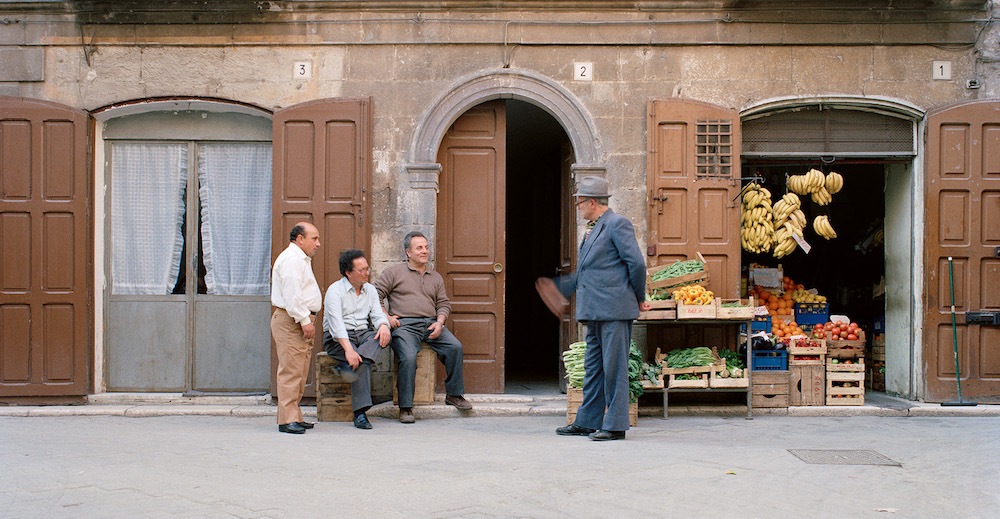 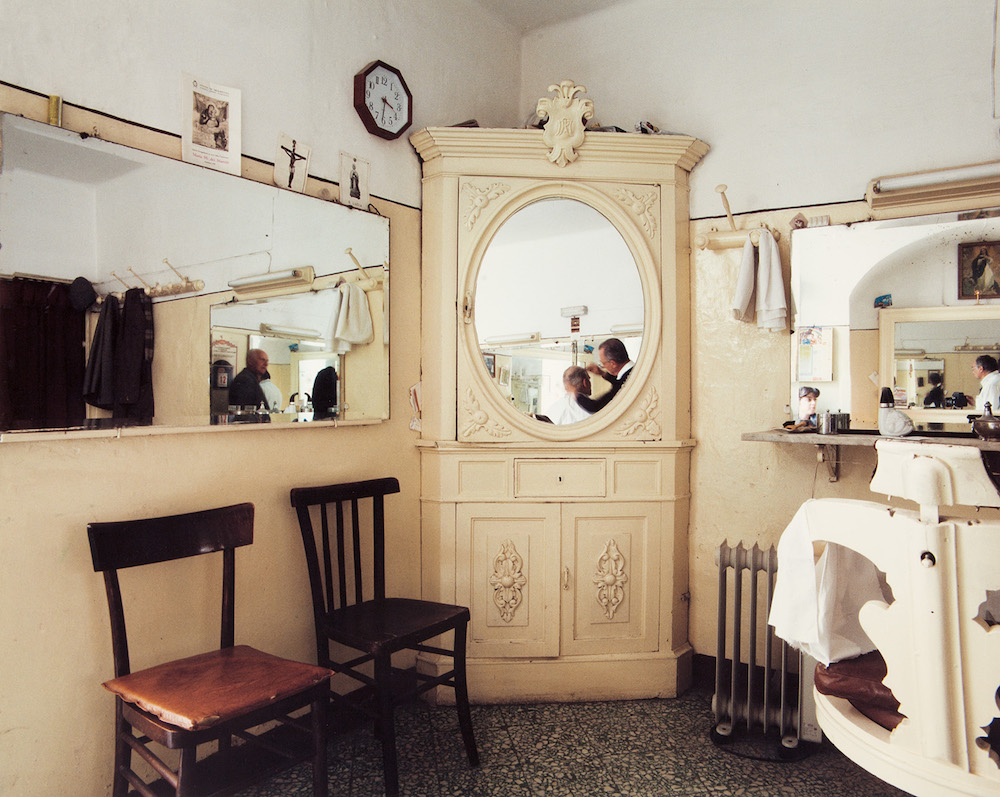 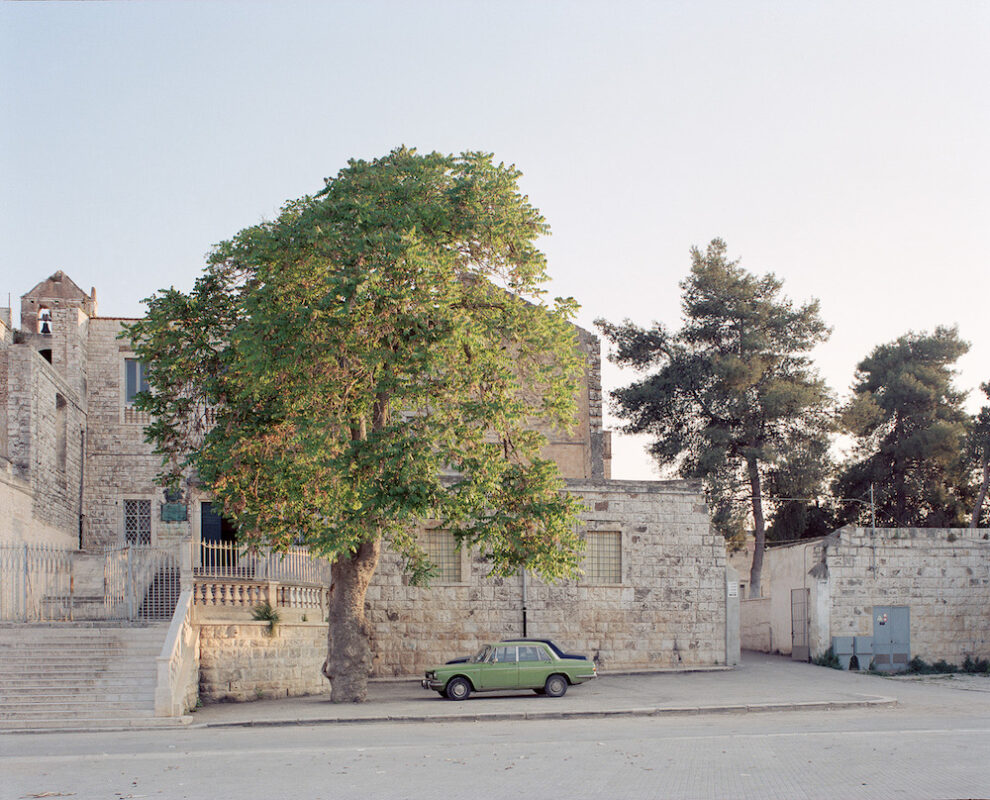 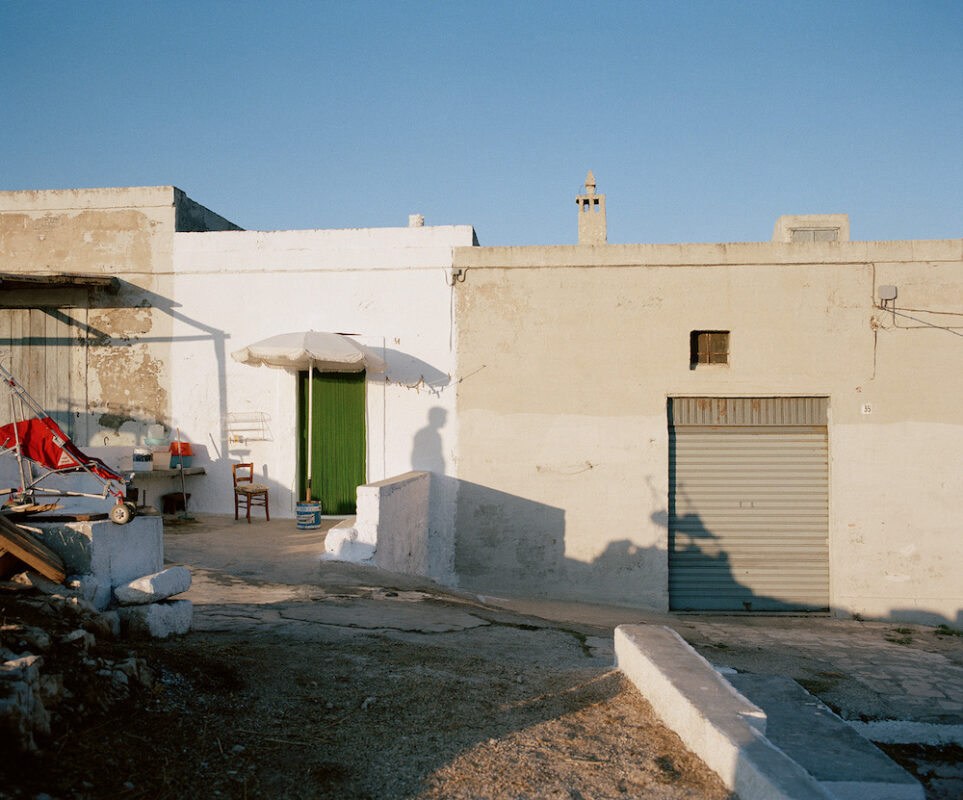 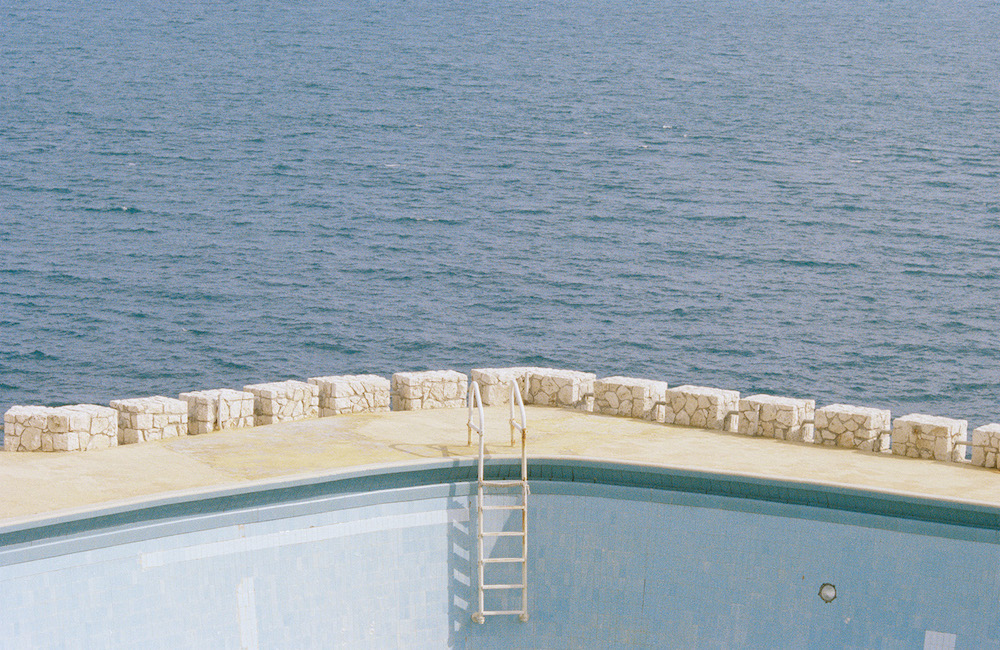 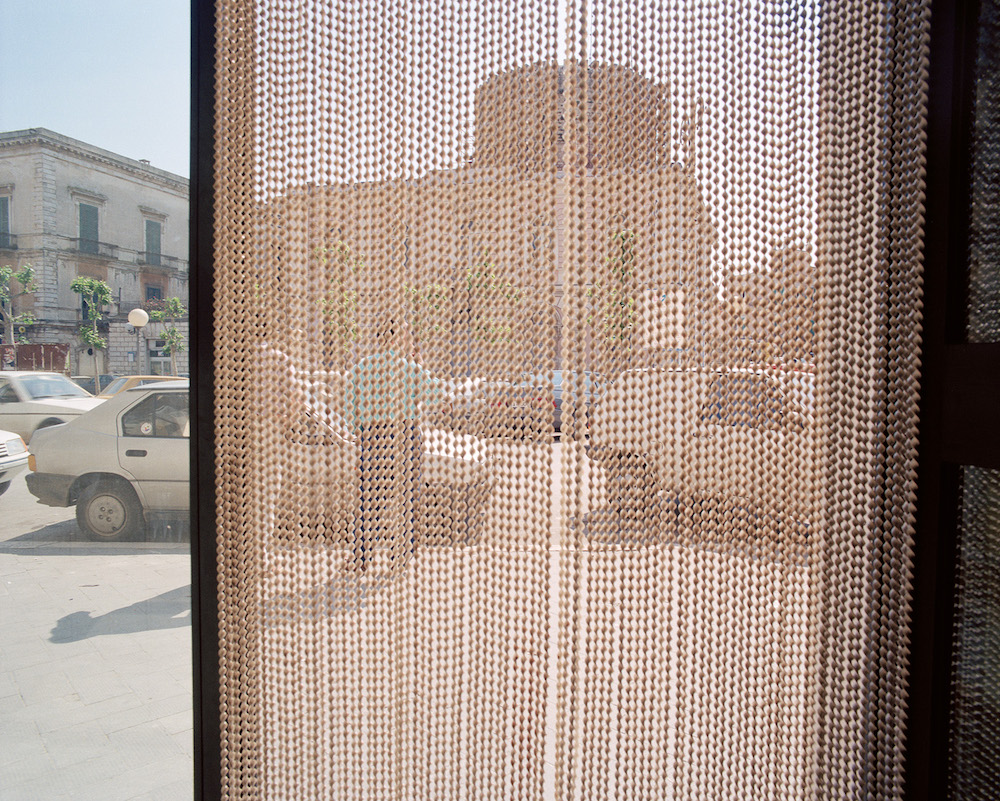 Luce Lebart extols the virtues of the latest monograph dedicated to Italian photographer Luigi Ghirri, Puglia. Tra albe e tramonti, published by MACK, a dazzling testament to the singular vision of the maestro of colour and light as well as his relationship with Puglia — the distinctive region at the heel of Italy.

Puglia, between sunrises and sunsets… The title of Puglia. Tra albe e tramonti, published by MACK at the beginning of 2022, announces its colours. From dawn to dusk, the hues here are slightly faded, as if they were swept by the wind and salted by the sea. The palette is sensitive and, above all, recognisable. It is that of the Italian photographer, maestro of colour, Luigi Ghirri.

Thick but supple in the hand, this beautiful book brings together more than 200 of the photographs that Ghirri, a native of northern Italy, took in the south of the country during his stays there from the beginning of the 1980s until his death in 1992, at the age of 49. There is no doubt that the photographer was marked by the light so different from that of his province of Reggio Emilia in Emilia-Romagna where he took most of his photographs. This light certainly contributed much to shaping his geometric apprehension of the landscape, as explained by those close to him.

Throughout the pages, the photographs follow one another with regularity, a parade reminiscent of cinematographic travelling: of wandering and strolling with family, friends or simply alone. At times, white pages offer occasions for breathing, punctuating the photographer’s views. The sudden whiteness of the paper echoes the dazzling whiteness of Puglia’s light. Each photograph is surrounded by white margins and seems to emerge into the light. The photographs are silent, as their captions are only run at the end of the book. The book, however, is far from silent. Three beautiful texts follow the picture album and recount it warmly, all written by relatives who are attuned to his work and sensibility.

Snapshots of strong moments give way to more banal ones. The little stories rub shoulders with the big stories. Ghirri’s method, as he himself wrote, is ‘very close to literature, but also to cinema…’ He said: ‘Cinema has moments of greater overall intensity with more narrative moments or with pauses which are nevertheless necessary for the comprehension of the film.’

The photographs published during Ghirri’s lifetime have been included alongside new unpublished photographs taken from his archives and chosen by his family. This book was produced by several hands and brings together different temporalities. It is the tangible reactivation of a project of the same name which, formerly, remained in the state of a maquette.

The first version of Puglia had indeed been designed by those who worked on the concept with his wife Paola Borgonzoni Ghirri, accompanying an exhibition devoted to Puglia which had opened its doors in 1982 in Bari on the initiative of Gianni Leone. Passionate about photography and an adorer of Ghirri’s singular gaze, Leone – then head of Spazio Immagine in Bari, dreamed of exhibiting the works of the native of Scandiano. It was in this context that Leone invited Ghirri to discover his region. Ghirri had started photographing 10 years earlier, in the early 1970s, and became known in particular for his major exhibition organised in 1979 at the Galeria Nazionale in Palazzo Pilotta in Parma, as well as for the monographic book that accompanied it, published by Quintavalle, with an introduction by Arturo Carolo. 40 years after the Bari exhibition, it is again Leone who suggests that the Ghirri family take over this unpublished dummy to tell its story.

“Nothing old under the sun,” Ghirri liked to say. This expression sticks to his vision, a vision that has accompanied the contemporary work made from his archive. For his daughter Adèle Ghirri, who is in charge of the huge collection now kept at the Luigi Ghirri Foundation, the archive is a “living space” that is in no way immutable or fixed. On the contrary, it is “a reservoir from which to extract and reveal new images”. It is with this approach that this beautiful book was designed at the crossroads of different views: that of the photographer, the gallery owner and the photographer’s friends and family. The past works on the present, bringing to life, in a different way, memory and recollections. This approach is actually familiar to the rights-holders of the photographer: also published by MACK was Colazione sull’Erba (2019) made with previous unseen archival images from Ghirri.

The form of Puglia speaks to its content and materialises its concept. The volume is surrounded by a recycled paper jacket, the centre of which displays the image of a deserted square in Bitonto. This image was not part of the original selection of the 1982 model, itself reproduced at the end of the book. On the front cover, we find this same place of Bitonto but with a tiny time lag: a boy with a bicycle has burst into the image here. The human figure was absent from the 1982 version. The Puglia of 2022 incorporates it: we meet the gaze of young communicants on their way to the church; men chatting in the piazza; children passing by; fleeting shadows, like memories brought back to life. These guests are added to the facades of whitewashed houses, to the images of green and white cabbages placed on a makeshift table, to the deserted alleyways, to the closed doors transformed into flat areas of colour with blinding luminosity… And then, an omnipresent coastline. As Arturo Carlo Quintavalle explains in his text: the journey in Puglia is a ‘story not about Puglia but of Puglia.’

For the photographer’s daughter, the form of the book is a privileged way to share the breadth and depth of Ghirri’s work. The collaboration with MACK has now lasted more than 10 years and has been rather productive, from Kodachrome (2012) to The Map and the Territory (2019), and The Complete Essays 1973-1991 (2016) to Colazione sull’Erba. This collaboration has also helped to disseminate the work of the photographer adored by Italians. “Nothing new under the sun.” The links between the man and his work created during his lifetime are still there. Life goes on, and, over time, the immense work of Ghirri extends and branches out. ♦

All images courtesy the artist and MACK © Luigi Ghirri

Luce Lebart is a historian of photography, curator and researcher for the Archive of Modern Conflict.