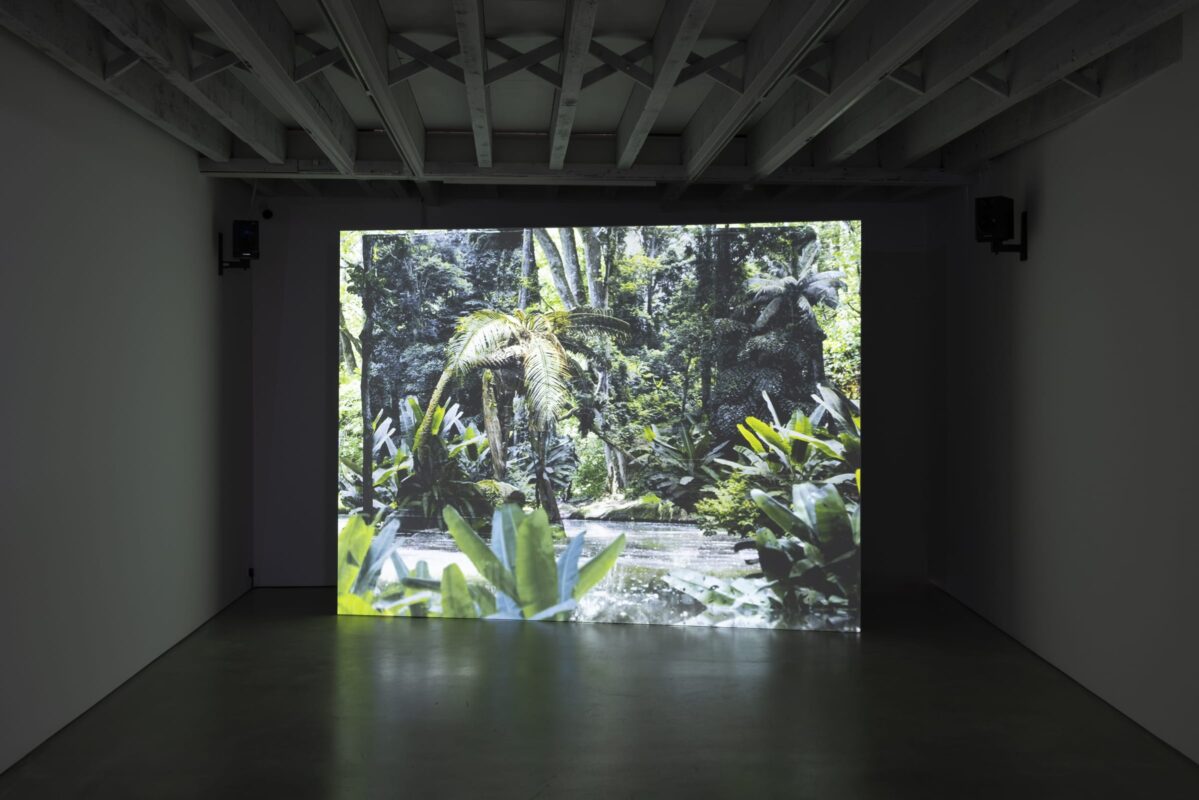 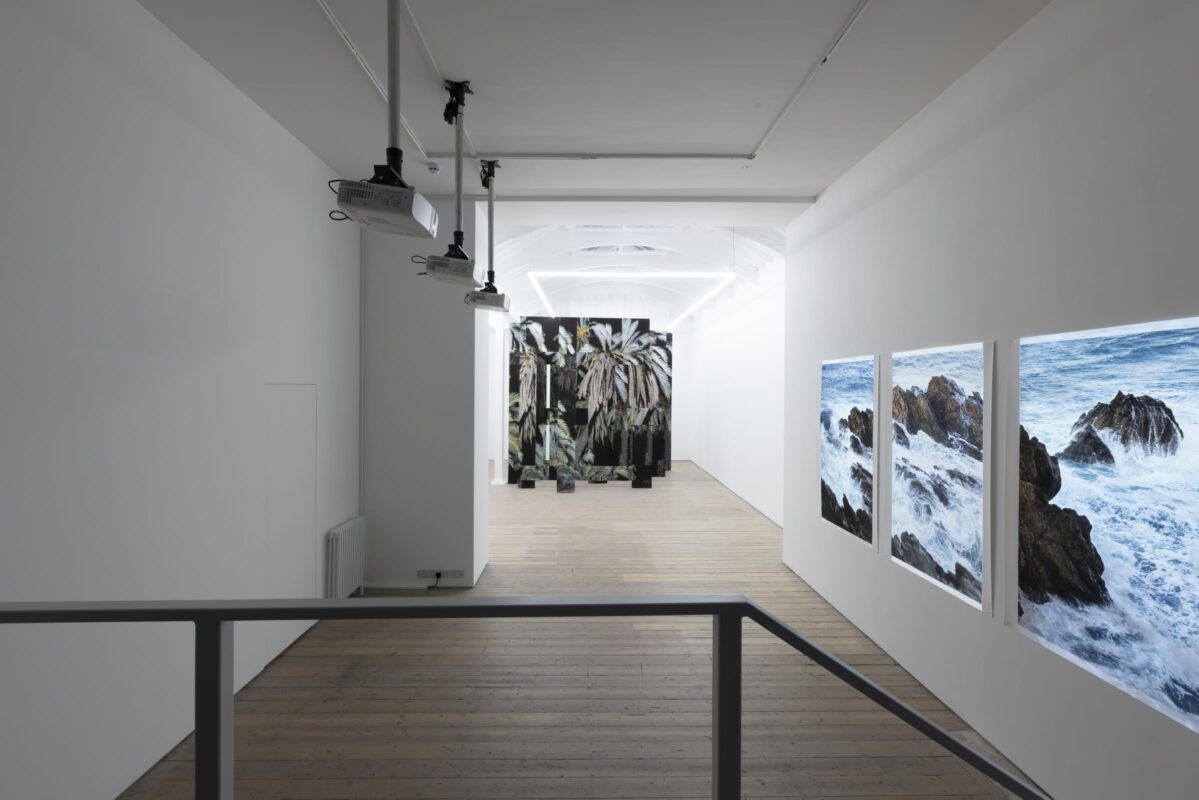 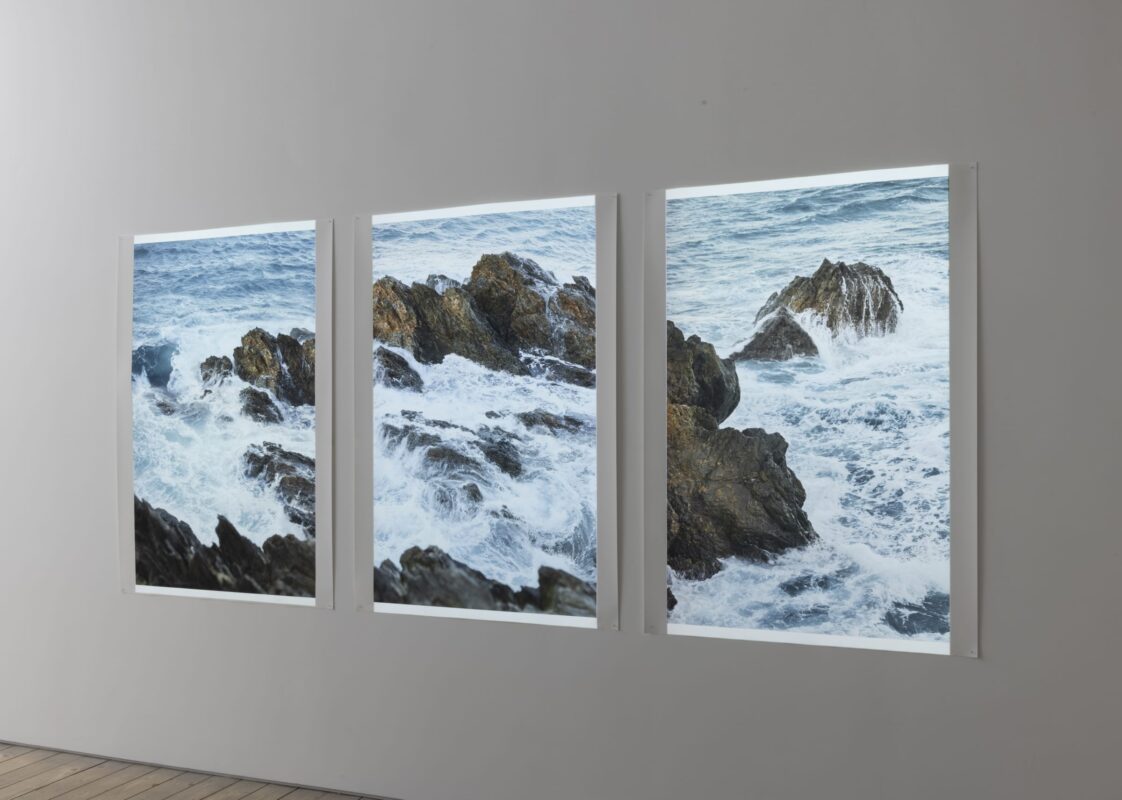 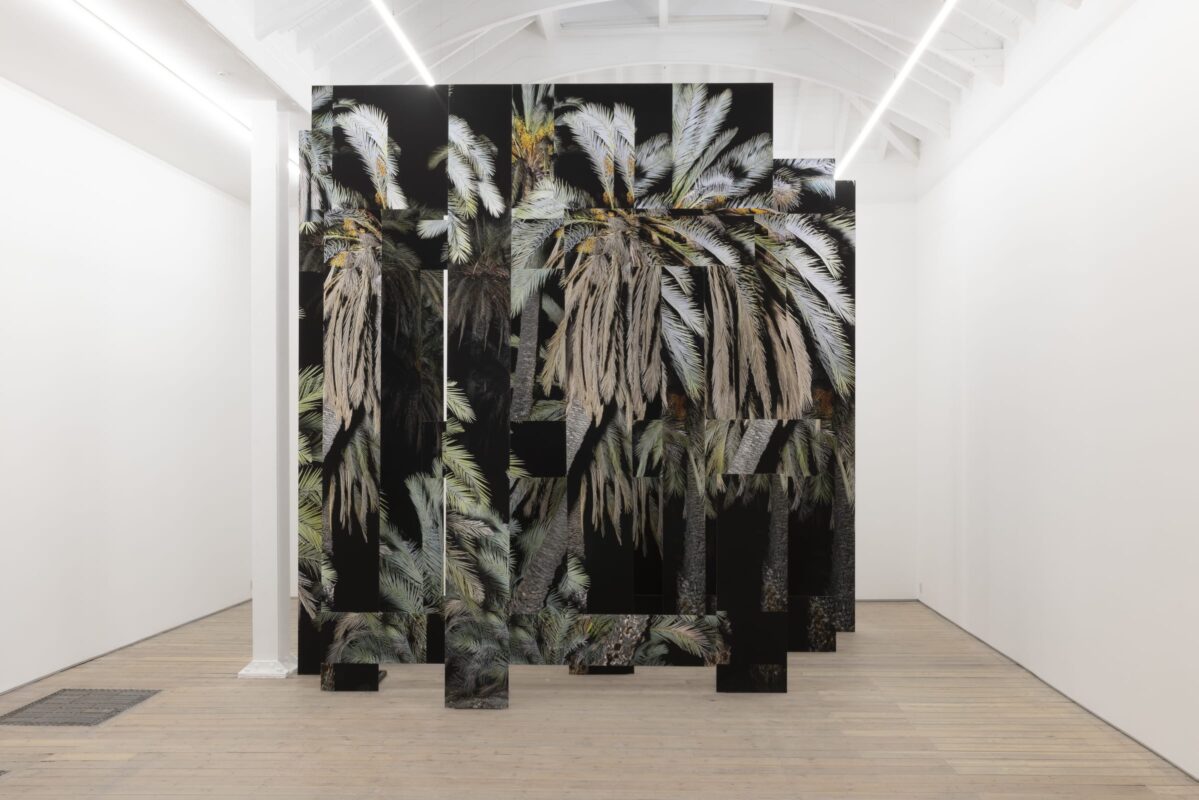 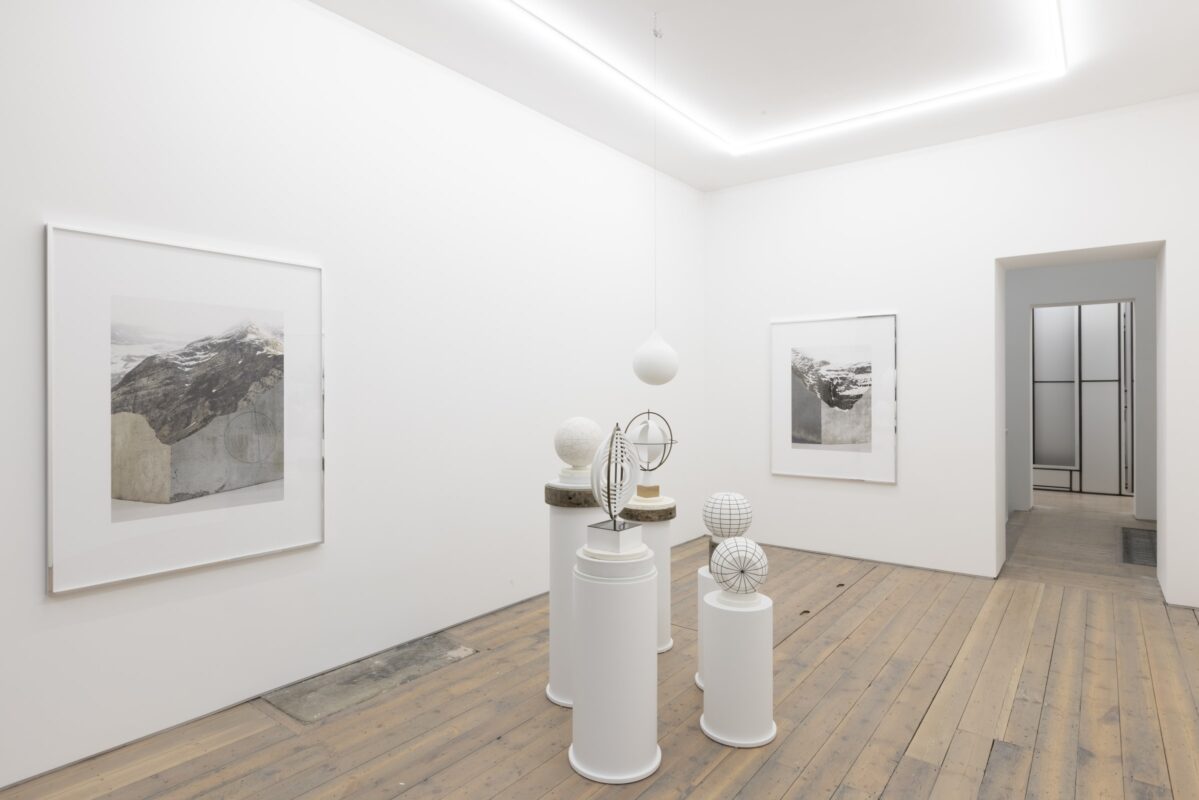 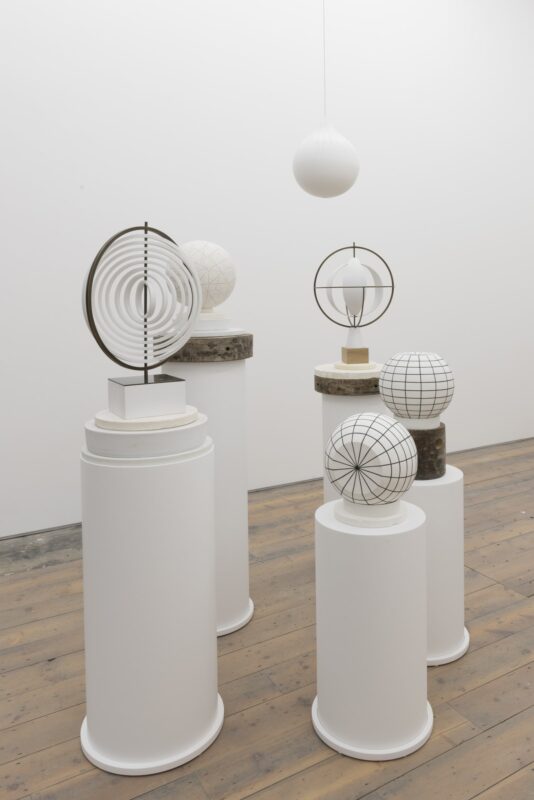 Noémie Goudal’s Post Atlantica is the first exhibition in Edel Assanti’s new gallery on London’s Little Titchfield Street. In this solo show, the artist’s recent works in various material forms and photographic realisation methods are presented with remarkable aesthetic and conceptual coherence. The gallery is arranged into spaces with distinct atmospheres, clearly produced with, and complementary of, each work. Together, the works essentially explore ecological and temporal concerns. At the same time, they complicate how the living natural world can be depicted by photography and moving image.

The gallery space upon entry is low-lit and features three long, rectangular large-scale paper works situated closely together. Untitled (Waves) (2022) contains print and high-definition projection moving image montages of sections of a single view of coastal rock formation surrounded by swirling seawater. The scene is composed from an elevated viewpoint without foreground or horizon. We are presented with an image of wild nature from a place between distance and proximity, the spectacle of the natural world and the artifice of its picturing in balance.

Central to the exhibition is Untitled (Giant Phoenix) (2022), a piece comprised of elongated rectangular photographs of palm tree fragments seen at night, illuminated frontally with the effect of revealing a high degree of surface detail. The flatness and rectangularity of each photograph is heightened by printing on matt paper and mounting on aluminium panels fixed to a steel frame that positions each photograph to form a single composite image when viewed from a central position. As the viewer moves left to right and returns to centre, the image fragments and recomposes alternately. This experience draws attention to spectatorship as a process raising essential questions of the basis of photography in perspective. Once a fixed viewing position is given up, it is as if the image falls apart and its fragments look back at us.

A low frequency rumbling soundtrack with crashing eruptive bursts draws the viewer into the gallery’s lower ground floor towards Inhale, Exhale (2021). This piece comprises a single screen projection onto a freestanding wall positioned at a slight angle, thereby unsettling the usual centrality of the screen. The moving image, projected floor to ceiling, depicts a section of woodland with a body of water in the foreground. The camera occupies a low viewpoint close to the surface. Correspondingly, a stationary viewing position from the gallery floor level is invited. From this point of view, framed by a fixed camera, a still, almost stage-like scene is set. Within the scene, diorama-like pieces featuring images of vegetation that complement and contrast with the woodland flora slowly rise from beneath the surface of the water, hoisted into position by a partly visible mechanism. Different ecologies and distant temporalities coexist for a short time in the image. Then, the set pieces are re-immersed, disappearing from view, remaining as memory. There is an uneasy sense of witnessing a distant event occurring unobserved in some remote place, and, at the very same time, knowingly orchestrated as spectacle.

Emerging from the lower gallery into a brightly lit space, evenly illuminating the works displayed, we are presented with a collection of porcelain, brass, bronze and wood pieces, Terrella (2021) and three colour photographs mounted in chrome frames, Untitled (Mountain) (2021), each situated in isolation on one of the three gallery walls.

The Untitled (Mountain) pictures combine photographs of partly snow-covered peaks and sections of mountain range with what appear at first to be seemingly impossible cut sections through the mountain, or walls in front of them in a ruinous state. Upon closer inspection, these elements are revealed as cardboard fabrications coated in variously textured paint, altering in scale and putting viewers in a position of close proximity and vast distance at once. In these photographs, we can see features of the natural world as we might just actually encounter them, and, at the same time, as models that not only constitute artifice, but show themselves as such. These works concentrate a central paradox of the photograph as both a record of observation of the world as it might appear, commonly understood as a document, and a constructed image, closer to our dreams and imaginings, a fiction. The installation of each photograph on its own wall positions them confidently as pictures that explore a single idea across subtle iterations. The exposed white borders of each print draw attention to the significance of materials in the production of the photograph as an application of ink to paper. Framed in polished chrome complementing the brass and bronze elements of Terrella establishes a dialogue between image and object, materials and abstract modelling in two and three dimensions.

Terrellas are small models of the earth that have been used in scientific research since the late sixteenth century as part of experimental processes that included the study of solar activity and related effects of light on how the earth can be seen under particular conditions. The six pieces that make up Terrella are situated in close proximity, five placed on column plinths, all clustered at varying heights, and one suspended above, suggesting worlds to be understood as multiple and in reciprocal relation with each other. The materials used in this piece have historical associations with the early development of photography in correspondences between astronomical observation and the desire to fix camera images. There is a polymath approach in these works, understanding art and science in dialogue, as different ways of making sense of the world with a shared spirit of enquiry.

Goudal’s work shows nature as a set of processes comprised of different ecologies, geographies and temporalities. Additionally, something of the illusion of the earth as eternal and the fragile instability of the world humans seek to know through seeing is revealed in the works presented in this exhibition. By looking at these works that show their own making in still and moving images, we make up and implicate ourselves with the living natural world.♦

Fergus Heron is an artist and university lecturer currently living and working in Brighton, England and Nairn, Scotland. He studied at the Royal College of Art, London and the University for the Creative Arts, Farnham, UK. Exhibitions featuring his work have taken place at venues including Tate Britain, London; Centre for Contemporary Art and the Natural World, Exeter, UK; Royal West of England Academy, Bristol, UK; Towner Art Gallery, Eastbourne, UK; Museum for Contemporary Art, Roskilde, Denmark; K3 Project Space, Zurich, Switzerland. He is Course Leader for MA Photography and a research supervisor in the School of Art and Media at the University of Brighton, UK.