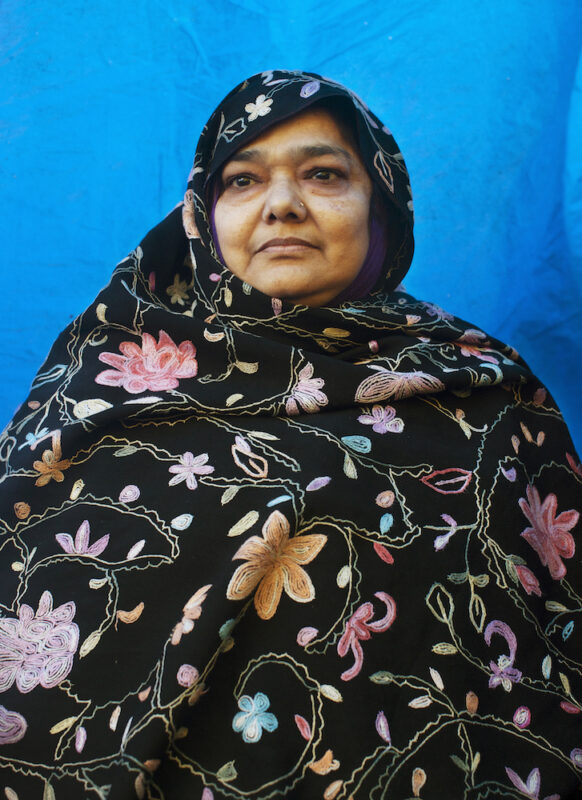 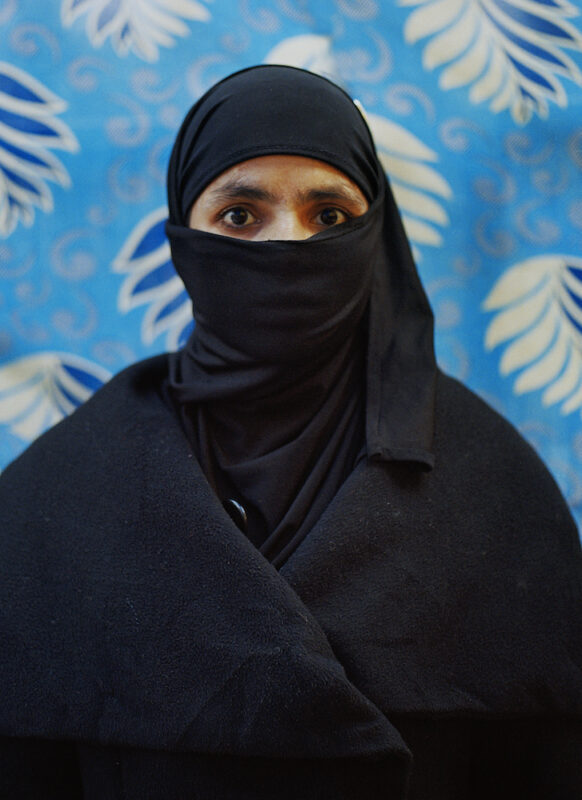 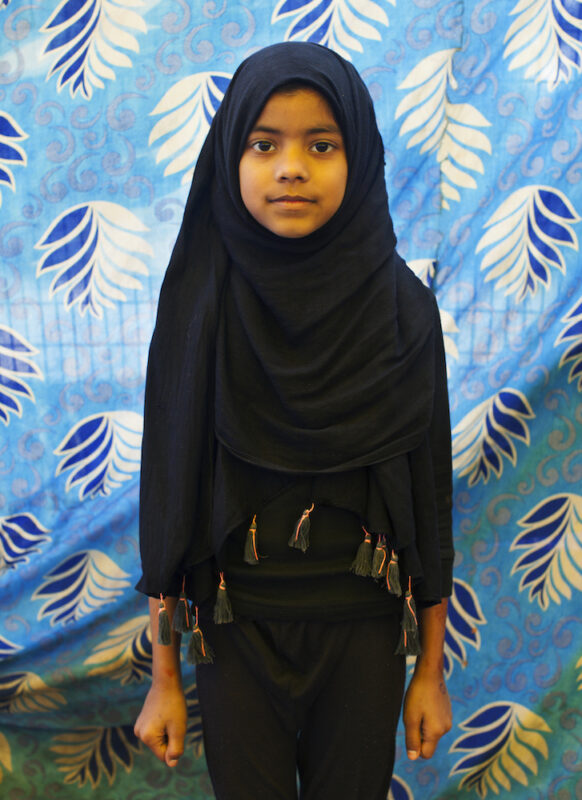 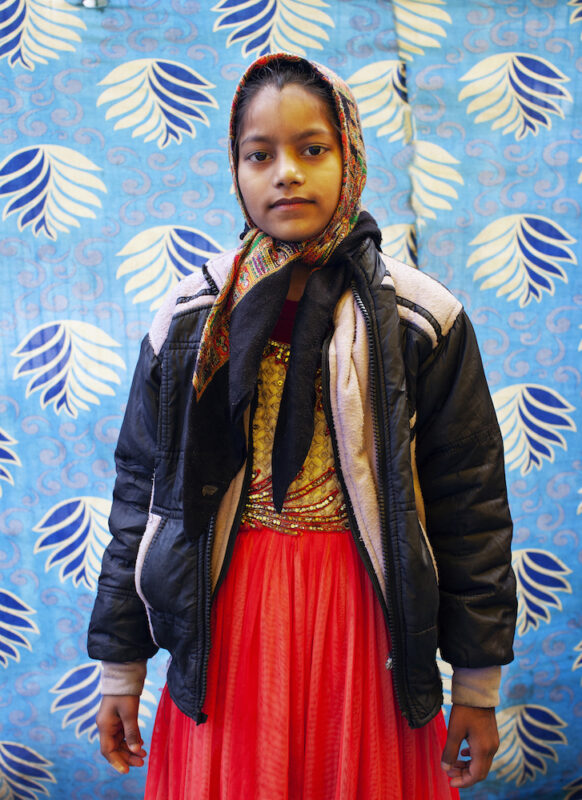 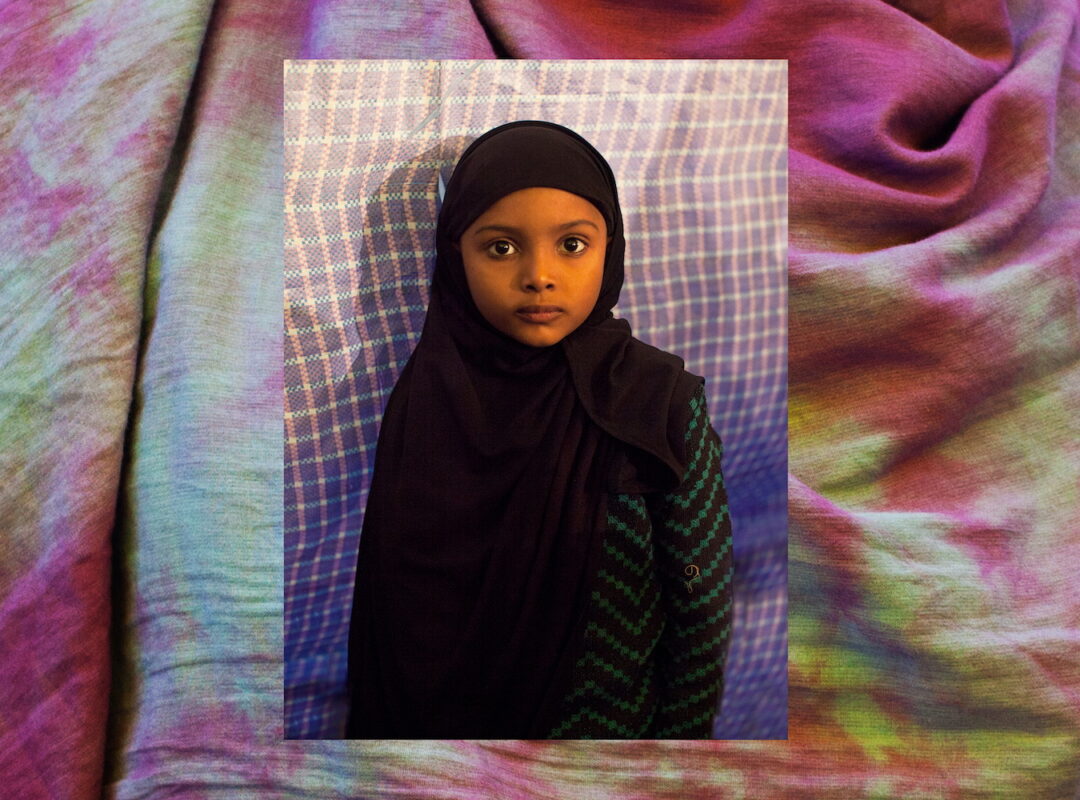 Far from clichéd photographs of violent protest, Prarthna Singh’s book records dissenting lives amidst the peaceful, female-led protest at Shaheen Bagh, Delhi to form a homage to what keeps the fabric of India bound together, writes Emilia Terracciano.

It’s chilly. She’s wrapped herself from waist to head in a woollen shawl. Swirling pink carnations, little indigo buds, bright saffron crocuses and crimson Kashmiri roses blossom all-over her: a winter garden of delights. She is waiting for her turn to be photographed. Today, the tarpaulin is azure, slightly crinkled in the middle. She stands before it and the photographer does her job. Soon after, she’ll walk away with a moist Polaroid developing her own reduced likeness.

A collection of poems, maps, letters, children’s drawings, photographs of women and children, Prarthna Singh’s Har Shaam Shaheen Bagh was created during the 100 days of a peaceful sit-in protest held at Shaheen Bagh – a working-class neighbourhood located on a trafficked commuter highway connecting Delhi to Noida from December 2019 until March 2020. Women and children, most of them Muslim, congregated at Shaheen Bagh to demonstrate against India’s Citizenship (Amendment) Act and National Register of Citizens – two bills introduced by prime minister Narendra Modi, backed by his Hindu nationalist Bharatiya Janata Party, which passed into law in December 2019.

The Citizenship (Amendment) Act makes foreign undocumented migrants and religious refugees from Afghanistan, Bangladesh and Pakistan eligible for Indian citizenship if they are Hindus, Sikhs, Buddhists, Jains, Parsis or Christians, but not if they are Muslim. Defining citizenship through religion, the Act is widely reputed to be unconstitutional in a country that is (at least in principle) secular and devoted to protecting the right of civilians to practice religious freedom. The Act further marginalises India’s Muslim minority, the third largest in the world. Primarily led by women, the demonstration at Shaheen Bagh rippled across the country in the form of multiple local versions. It was only the spread of Covid-19 that brought Shaheen Bagh to a halt. After lockdown was declared in India, the military moved into the site and destroyed all the structures that grew around it like the rings of a tree: kitchens, chai-stalls, libraries and day-care spaces for children.

The female subject has long been the focus of Singh’s photographic career. Her Champion (2015–ongoing) offers a series of delicate and introspective black-and-white portraits of young female athletes training at government-run sport camps in the northern states of Haryana and Uttar Pradesh. These pubescent figures, at once vulnerable and strong, defy normative feminine roles: the devoted wife and mother, the familial custodian, preserver of tradition and domestic keeper. “This is not the archetypical female form Indian families recognise,” explains Singh. “For me personally, this figure becomes affirmative in a very patriarchal set up. One of the reasons I get excited about women and their stories is because in the Indian media, ‘woman’ is always the passive object or victim… I want to be surrounded by radical female strength. It is both helpful and hopeful, and this is what keeps me going as a photographer.”

Upon hearing about Shaheen Bagh, Singh travelled to Delhi and took up residency at her grandmother’s home, about a 15-minute walk from the site. It was the second coldest winter since 1901. Joining as a protestor first, Singh sat in, ate, drank chai, sang and chatted to the women who had gathered at Shaheen Bagh. It was later that she became a loving witness, picked up her camera and toyed with the idea of documenting the epic sit-in. Singh organised impromptu set-ups, stretched tarpaulins for backdrops and began to record protestors’ likenesses with her camera. For every portrait taken, she created an identical Polaroid to give back to the sitter. Renamed “magic paper” (jadoo ka kaagaz) by the young girls at the site, the format acquired immediate popularity owing to the advantage of being easily and immediately available. Many more women and children turned up to queue before Singh’s camera.

The photographs included in the book are collaborative and playful; Singh refuses to frame the peaceful crowd as a dangerous collective. Contrasting the demonisation of the mob by Indian mass media, and the erasure of crowds from contemporary art photography, she focused her lens on one demonstrator at a time and delighted in photographing each sitter through a series of frontal, formal and carefully-posed portraits. Each protestor faces the viewer as a proud citizen-subject. We do not find the clichéd photographs of violent protest but a documentation of dissenting lives. There are students, children and mothers – housewives clutching handbags, purses and phones, all wearing several layers of clothes.

Perhaps the salient feature of Shaheen Bagh resides in Singh’s desire to relay something of the protestors’ arguments, intentions, radical disagreements and faith for the future. The portraits and written letters from participants are both important to underscoring this effect. Singh inserts clues and markers of this feminine multitude, and the shape-shifting spaces in which it moved, dwelled, sang, breast-fed, read, cooked and rested in between the individual portraits. Tactile and textile references are threaded into the book as photographs; women lined Shaheen Bagh with fabrics brought from home, but also engaged in acts of exchange: swapping garments, burqas and shawls. The book itself is bound in an off-white, unobtrusive fabric that does not call attention to itself as an object. Singh reminds us of the political and persistent nature of textiles in the history of India, and offers a homage to what keeps the fabric of this country bound together. Shaheen Bagh, set up by women for women, was also an impermanent shelter from the doom of domesticity. The forces of order would rather these women remain invisible and undocumented, be obscured, silenced or tormented. Singh’s book is a memorial to all those who came together to protest, generating in the process a novel vision of solidarity.

Emilia Terracciano is a writer, translator and lecturer in Modern Art History at the University of Manchester.