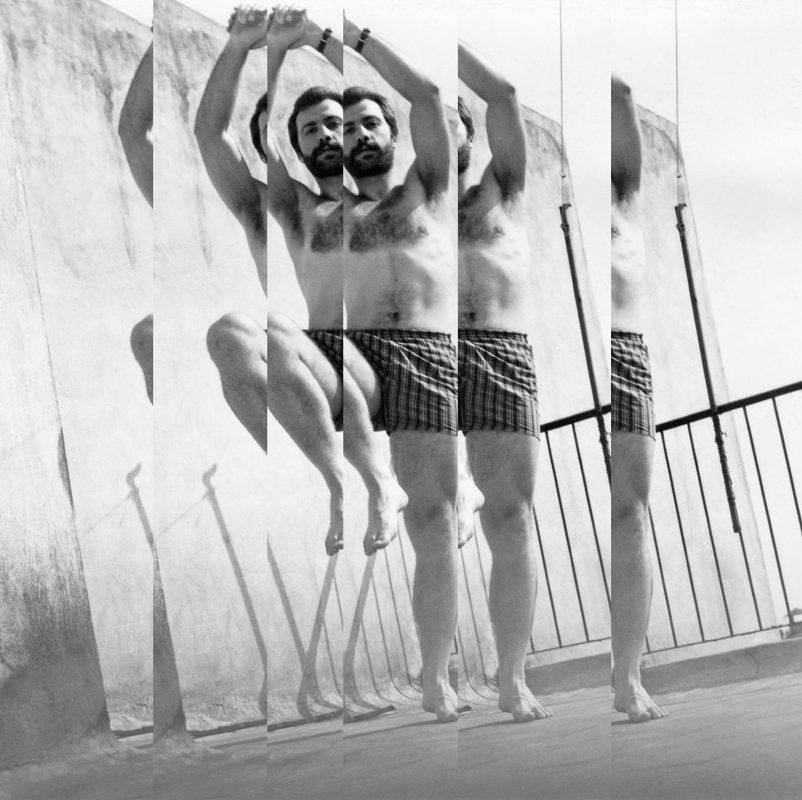 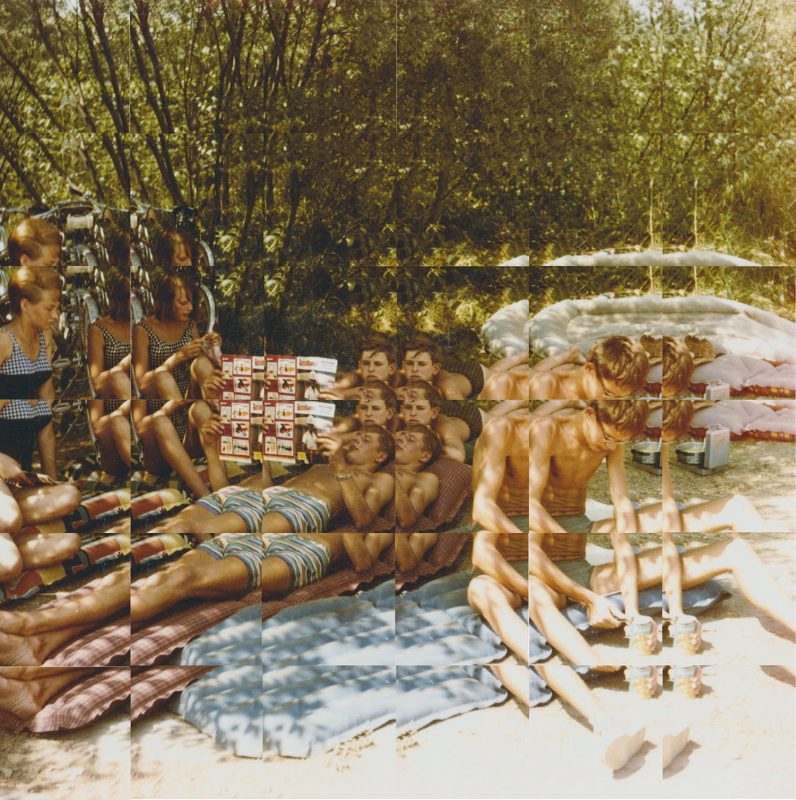 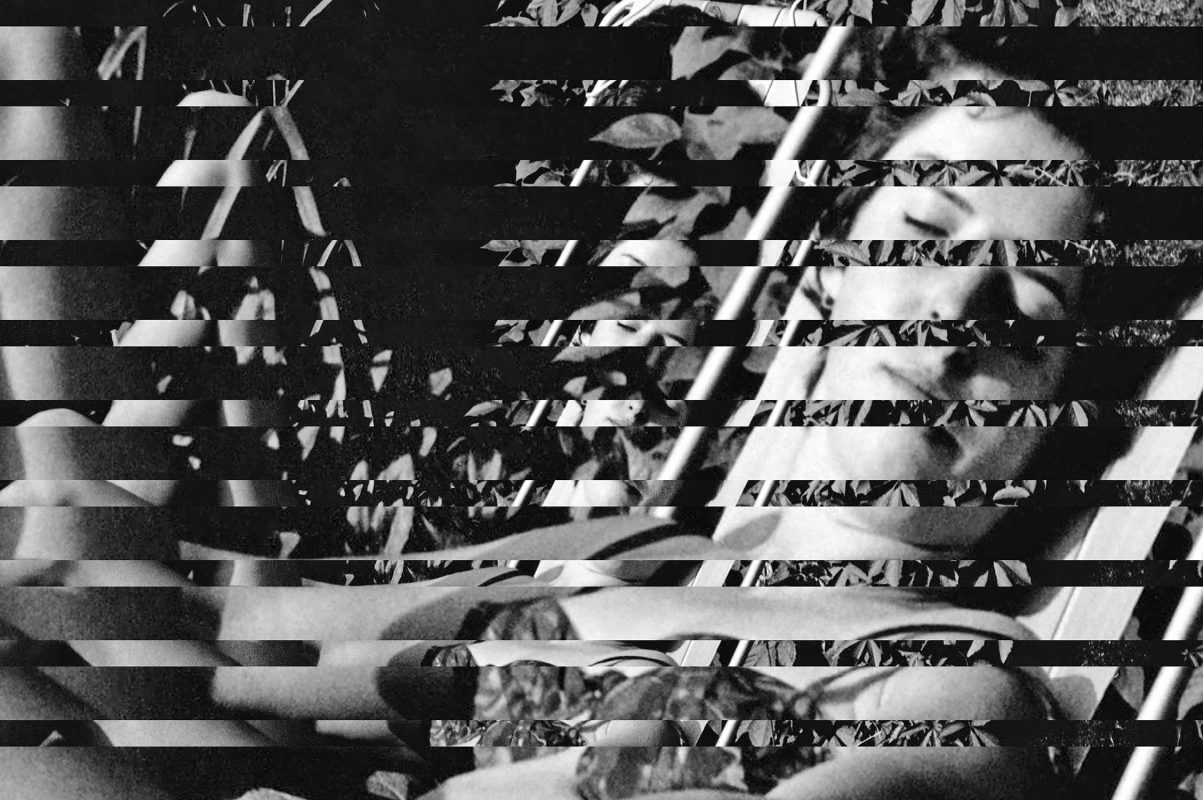 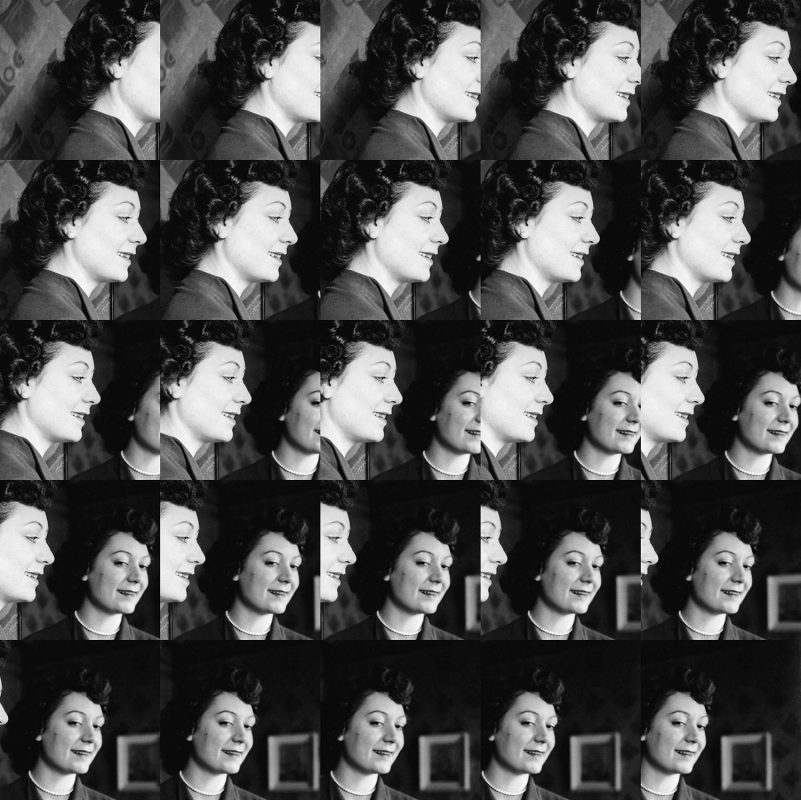 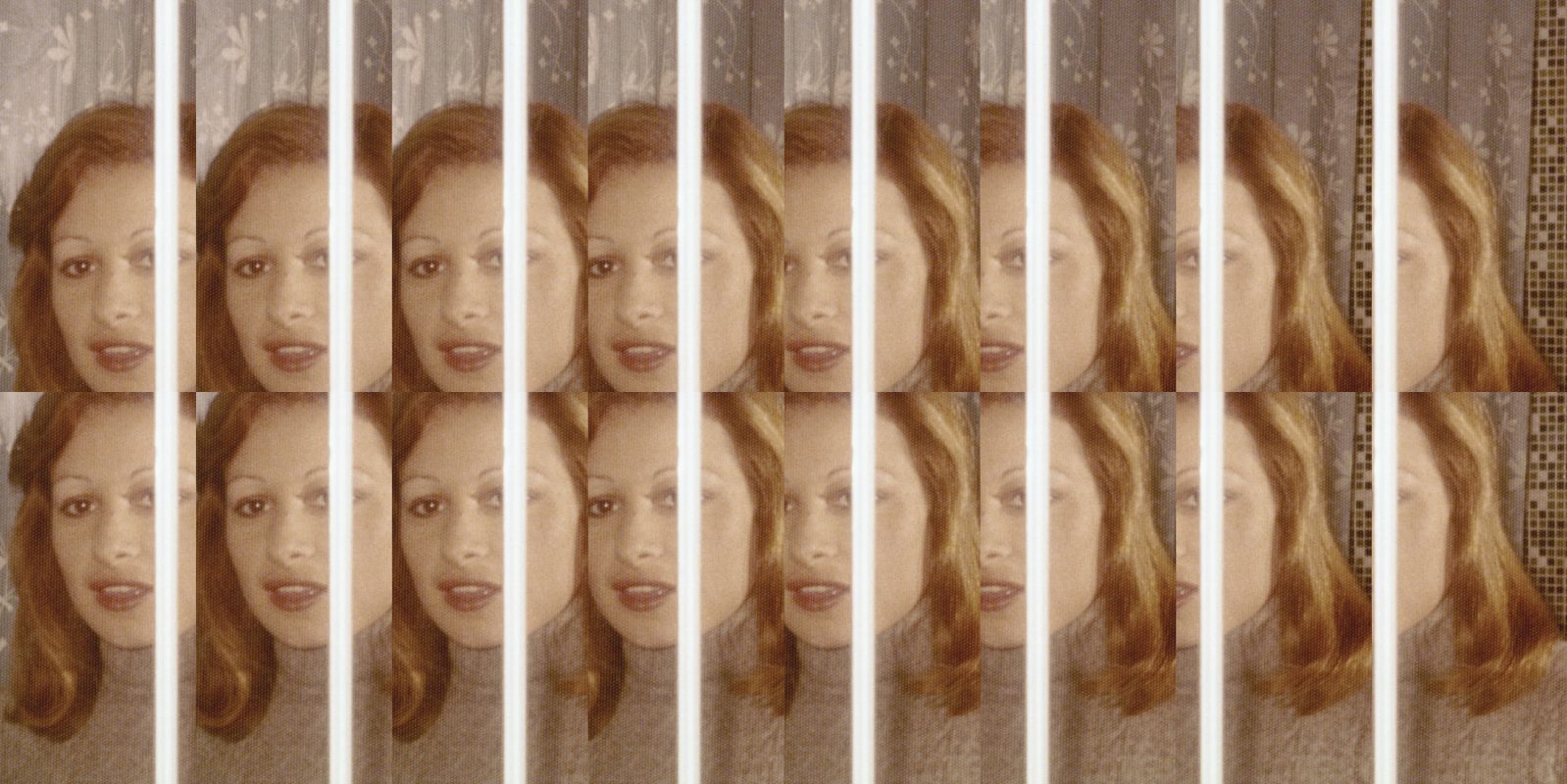 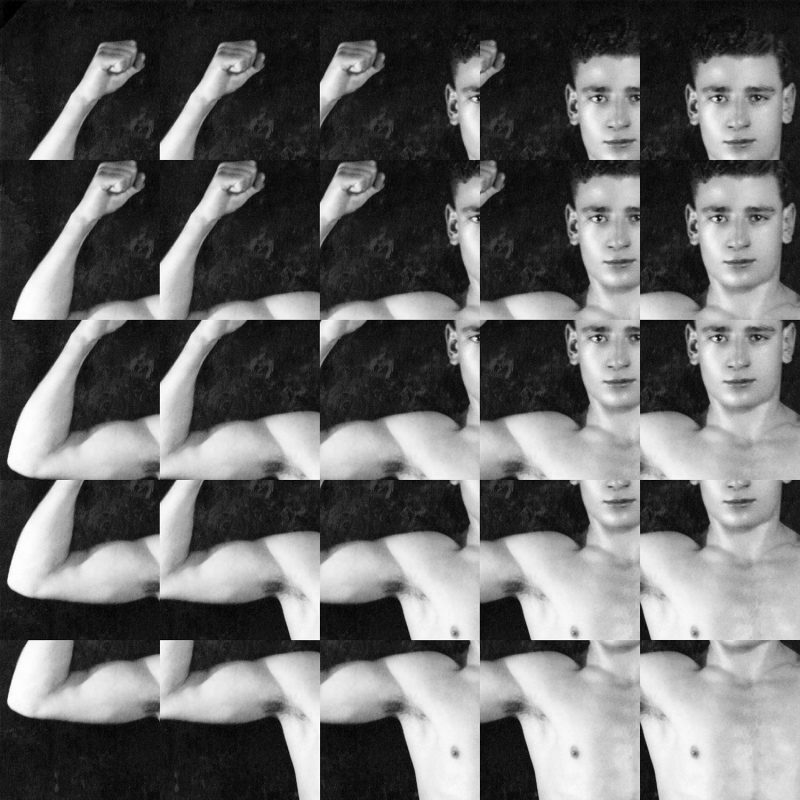 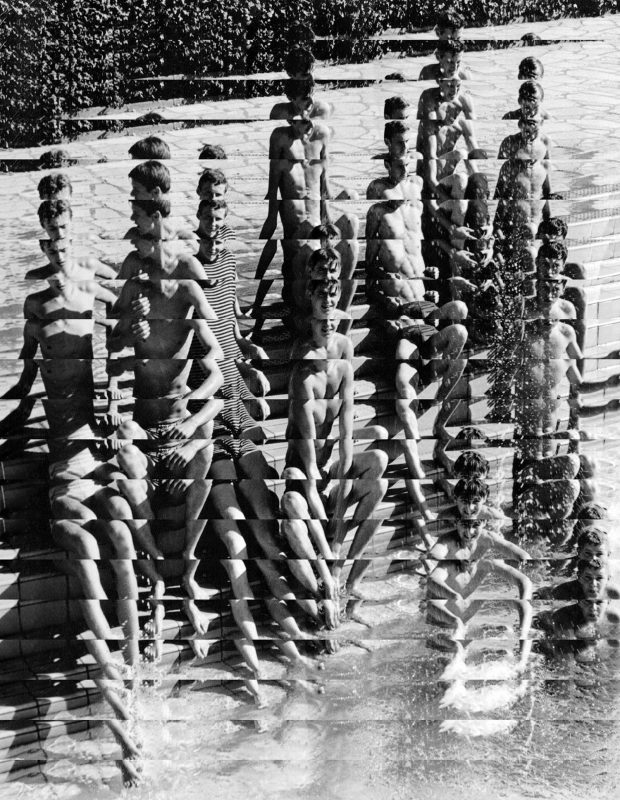 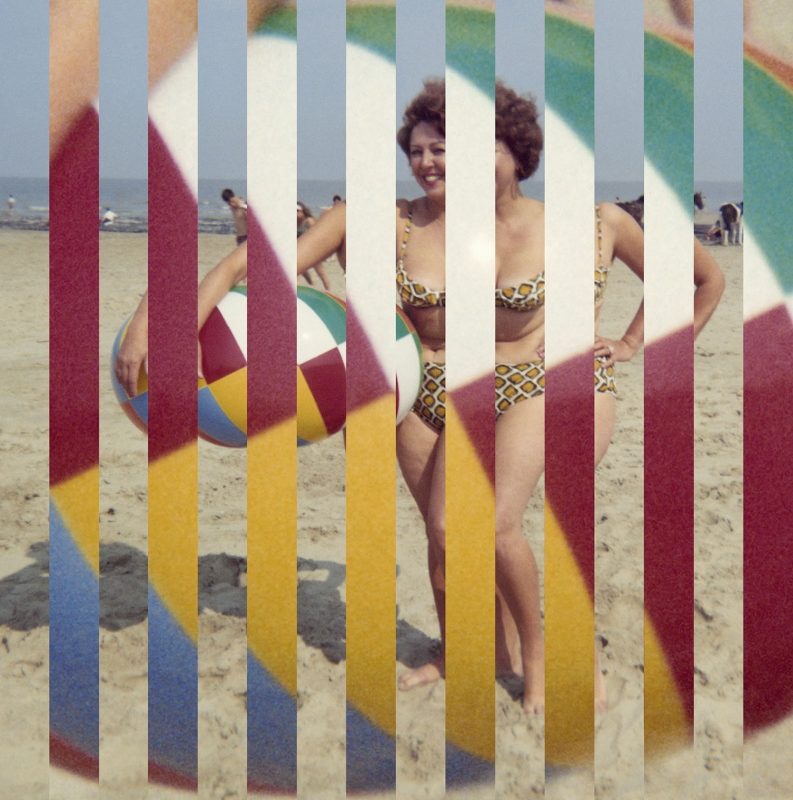 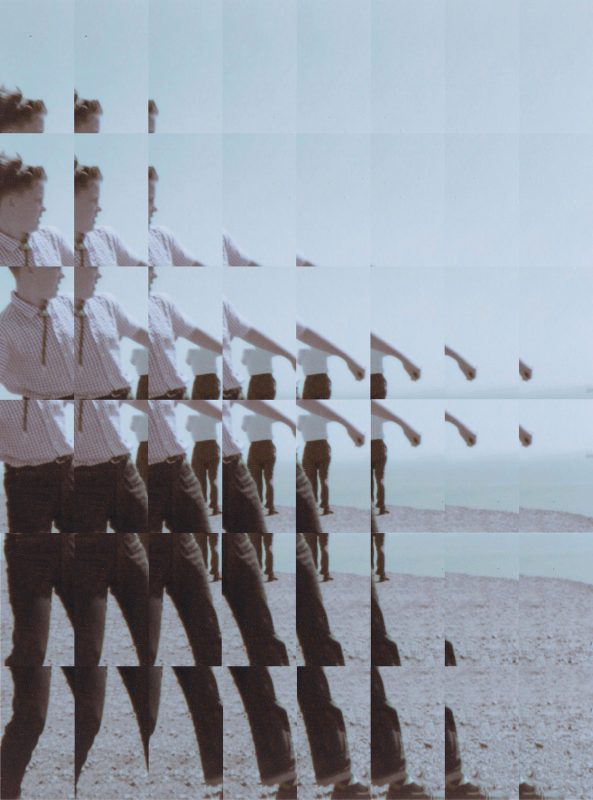 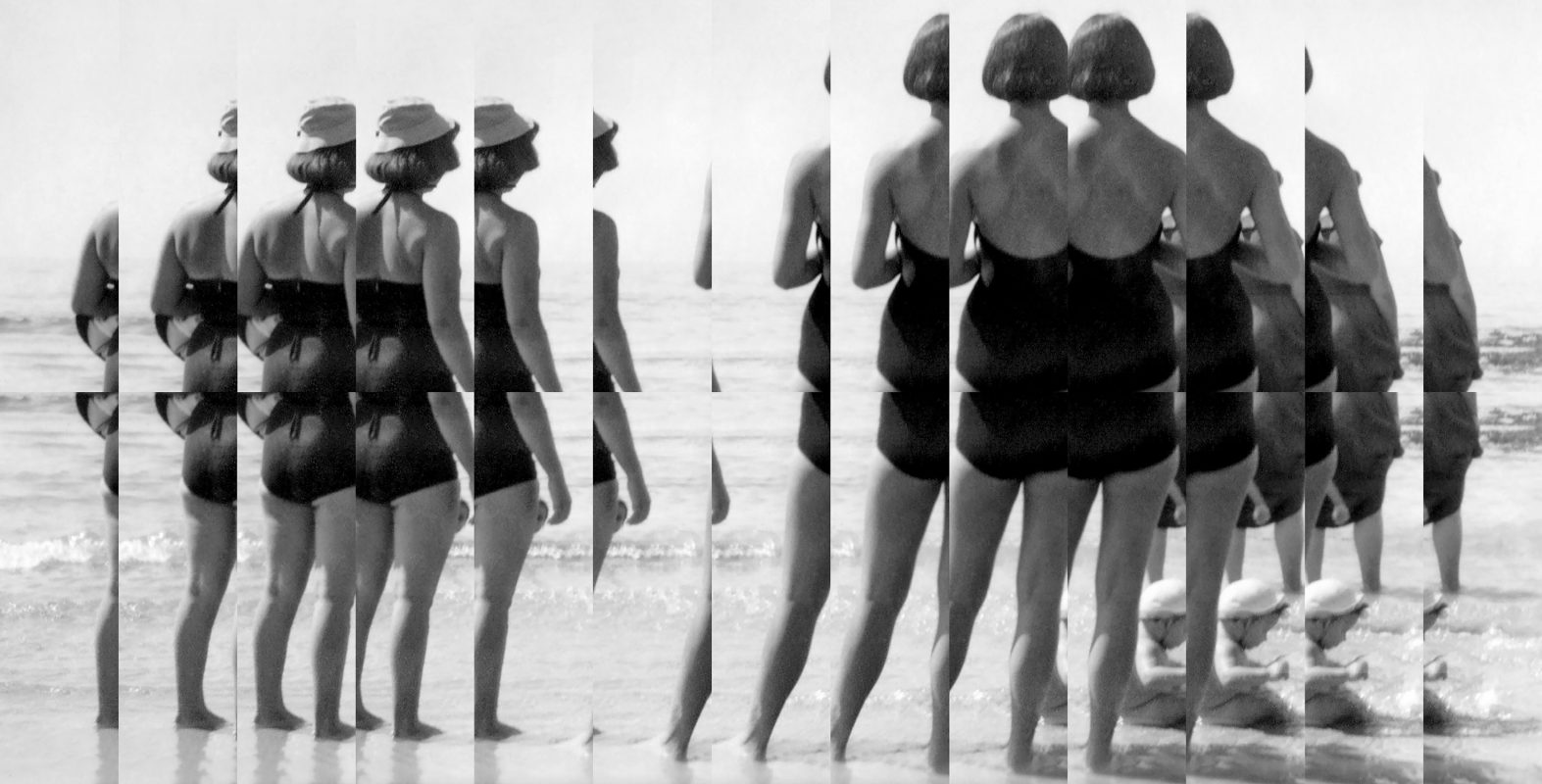 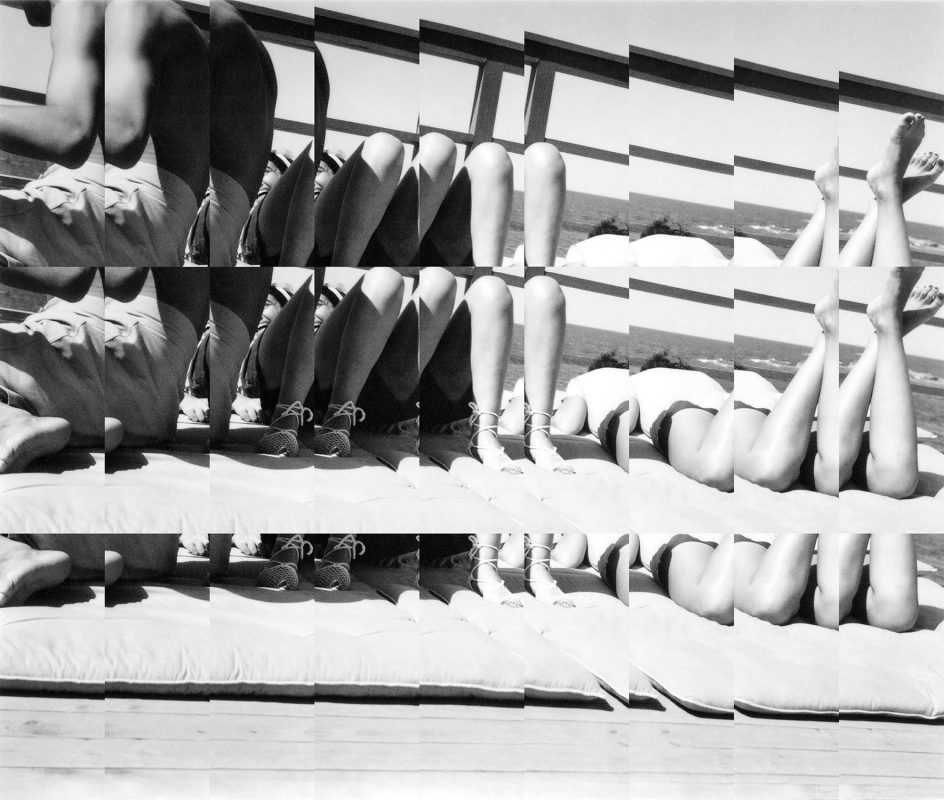 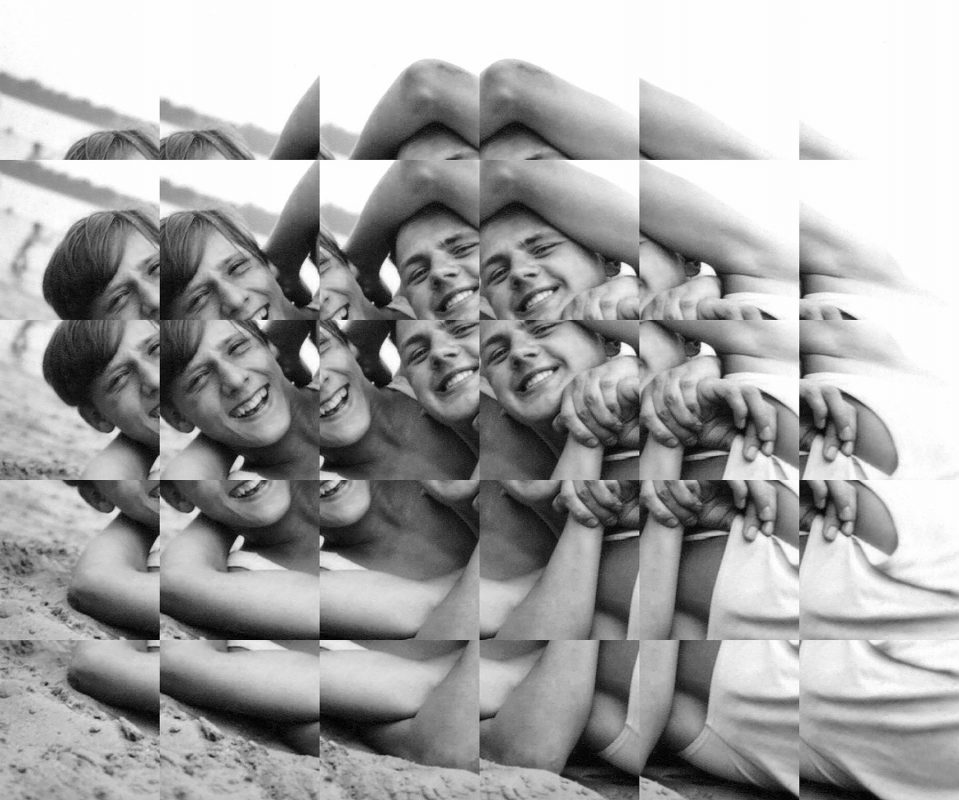 The images in Edouard Taufenbach’s Spéculaire are pulsing. A vibrating hum draws us towards their surfaces. Inside these images, bodies radiate: an outstretched arm extends, reaching impossibly from a masculine figure at the right of the frame. To the side of a tree, he is about to pluck from its fruits. Dynamic movement is in process, but at the same time about to occur. We follow and sense that which is to come. In another image, a younger boy looks right and faces the water. His left arm is outstretched in an act of pre-emptive balancing, as if his right arm, out of the frame, is primed to throw a stone. We see neither the throwing arm nor its object, but the image is shook: it ripples.

On the threshold, a photograph is present and past. Yet more excitingly, it speaks, also, of a future becoming. Its incidents are recorded and become an aid to memory, but the image is actually a site of potential, if all too rarely explored. Taufenbach’s Aden, with his outreaching arm, shows a moment of choice: to pick from the tree, with the desire to claim and devour; Ricochet, preparing to skim stones, recalls the wish to see our agency make an impact, to reveal consequence in the resulting wave. Neither of these events are completed, but we see their becoming, and we in turn complete them. But the futurity of these images is greater than a small moment. We read them not as specific instances, but as gestures, as acts, which have resonance – a searching, an impacting, a turning towards, and a turning away. When the image is looking forwards, it might show us the that has been, but it conspires to open up something in an unspecified future, a that which is also yet to be, a that which might be. How we act in response is what matters. The artist’s use of the photograph that changes its function, from document to gesture, from report to catalyst.

Drawn from a collection of photographs belonging to French screenwriter and director Sébastien Lifshitz, who invited Taufenbach to respond to and re-think images from his collection, Spéculaire traces a line of re-imagined imagery – photographs which have shifted through multiple purposes, responses and conditions. Photography might enter this space of the that which might be, precisely because it is not the event or person itself. Removed from original context, since those contexts have been lost, given up or abandoned, and removed from being the thing itself, photographs enter a different temporal frame.

Spéculaire’s vernacular snapshots of people at leisure – gathered in groups, in couples and as singular actors – became for Liftshitz a ground for an exploration of desire, sexuality, and intimacy, seeking out a homoerotics of the photograph, which the images provide through complex spaces of public and private exposure. They began however as aide-memoire, as memento and/or as a surrogate, as the photographs of our relationships, those which constitute what the sociologist Pierre Bourdieu identified as a glue between subjects who are distant from one another. With this link undone, speculation about the image begins. Taufenbach comes to these images with only fragments of their former uses intact or available to him.

Art and photography’s obsession with the archive might begin to be explained with a simple observation: the artist is also a collector. This collecting – of objects, but also forms, events, stories and gestures – lies at the root of artistic production, where a view of the world is constructed so that it might, in turn, be shared, encountered, and collected afresh. Taufenbach’s gesture in Spéculaire is to draw attention to the layers of this collecting – from the image-maker, the collector, and the artist, who proposes a new use or view of that image. Taufenbach does so by pointing to a potential in the image, and to make a world from it. It is an opening that draws upon but also diverges from the original gestures of the photograph, as well as Lifshitz’s collecting. Taufenbach animates what Walter Benjamin called ‘the unruly desire to know’, a desire to know the unknowable in the photograph, a curiosity that can only ever partially be captured, as both subject and image ‘will never consent to be wholly absorbed in (the) art (of photography)’. He identifies a precise moment of potential and draws upon montage so that the image can be extended, both connected to and growing distant from its original referents.

Taufenbach’s strategy, adopted from his study of film and media, emerged from his previous project Cinema: Histoires Domestiques. Here, he applied graphic forms which dynamically shifted the focus of an image so that it splintered across several axes, highlighted by vivid colour, which served to construct layers of narrative. In Spéculaire, the dynamics of each image generate a specific internal tension, so that the frame and form emerges centrifugally from within the photograph and not from outside. These elements – an outstretched arm, but also a gang of bodies, shifting scales, or areas of focus – point to gestures and actions, which shift our viewing of the image from a search for the desire to know the specificities of the picture, the who and what of the image which we assume it contains in order to grasp the embodied phenomena of an encounter right now. Sur la plage seems to call us to enter the frame, between the two bodies, to see beyond. It is a gesture which brings us up close to the desire of photographs, to a searching, which we both recognise and enact. Taufenbach may have collected these images, presenting visions, but we find ourselves reflected in them, the photograph made specular.

Spéculaire reveals that photography’s collecting is multiple, as an object to be collected and an act of gathering in itself. The photograph begins as a vicarious capturing – it proposes the collecting of the uncollectible, a sliver of time, an event, even of bodies. But the photographic object itself becomes collected, organised and structured; it is in flux thereafter. This perhaps accounts, in part, for the flickering impression of Taufenbach’s project, reflecting the ever-shifting nature of our images. But our experience of looking at the meeting of image and object in Spéculaire take us also to the mechanics of vision. Each encounter with the image brings us to its vibrating effect. What is its meaning and consequence? Taufenbach animates the image, but constructs it so that content and object co-exist in a tension that reflects the assemblage that is photography. In so doing, his images pierce our curiosity for what is to come. We reflect this as our eye flickers in an echo of the effects of the image, shifting dynamically its focus, to come to terms with an image that is, in our encounter, still moving. ♦