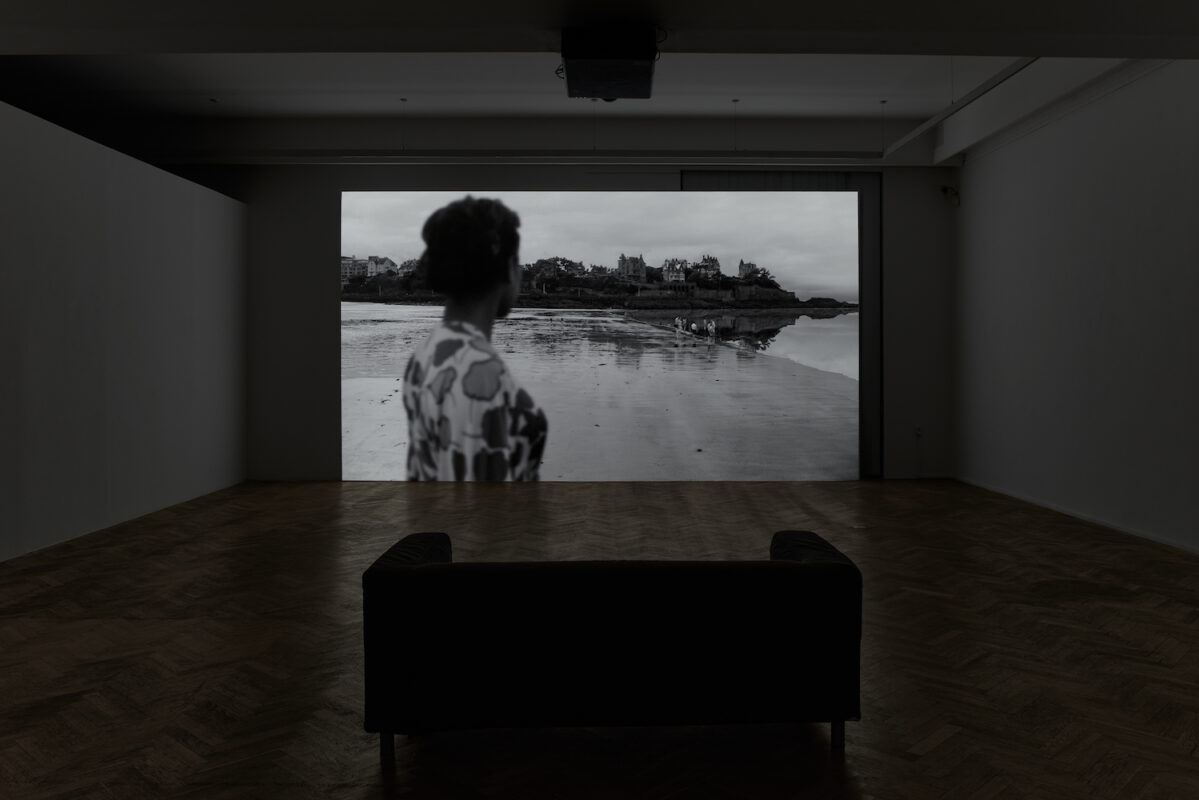 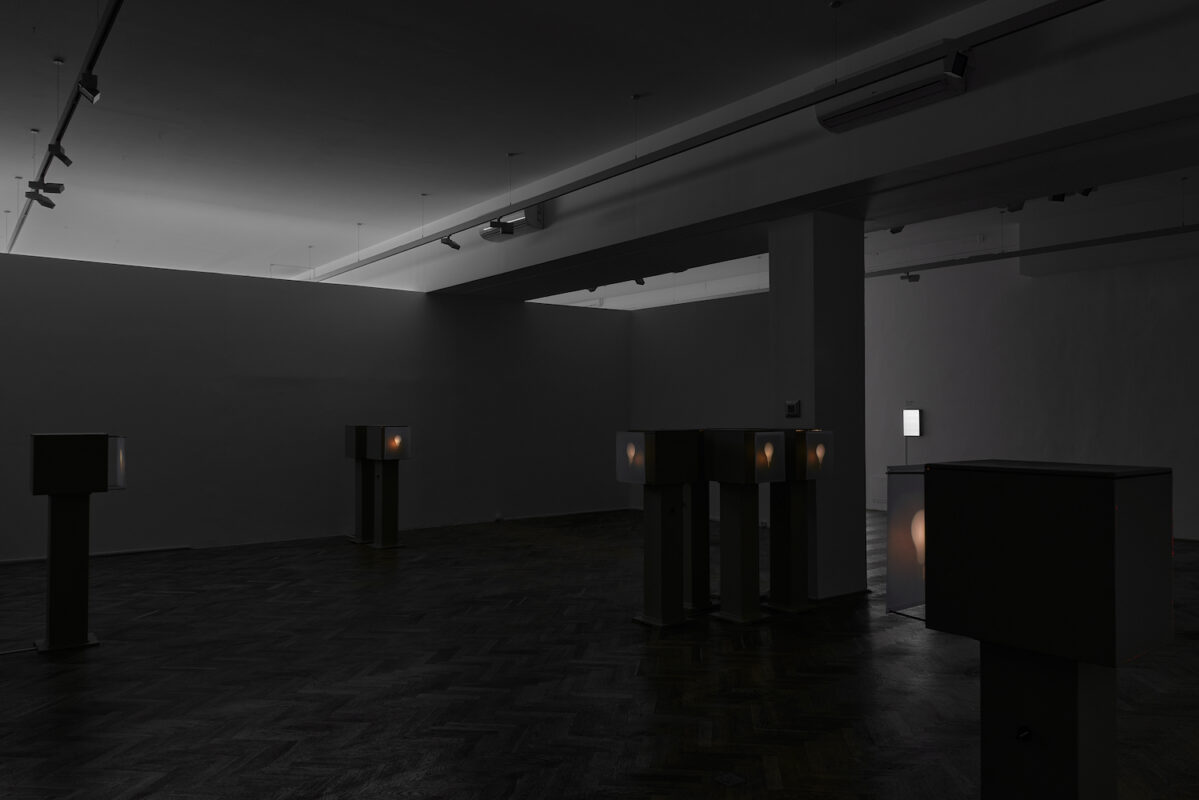 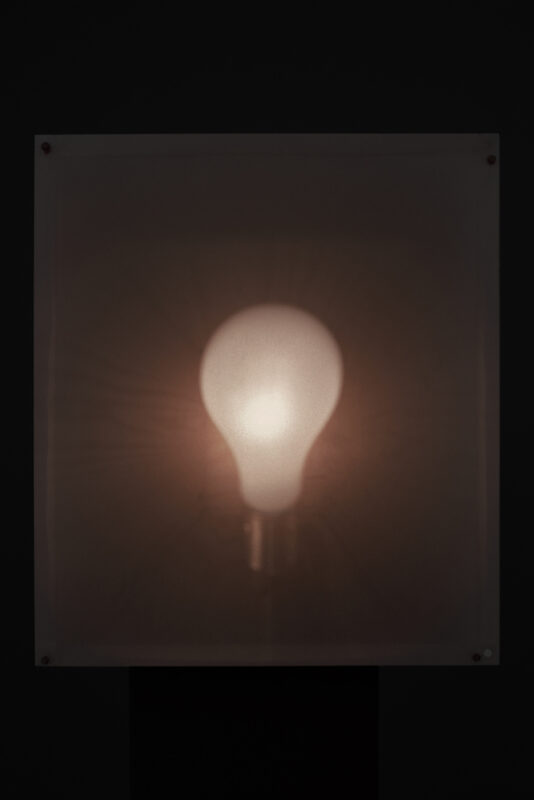 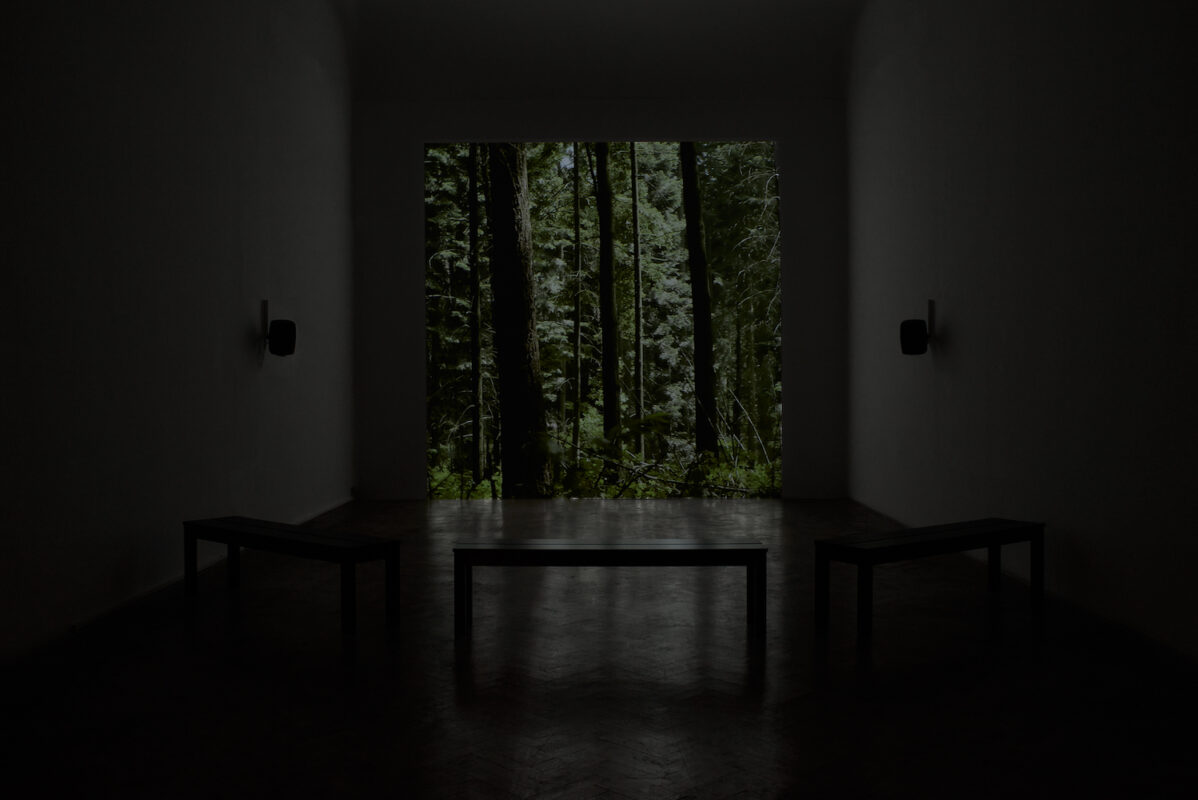 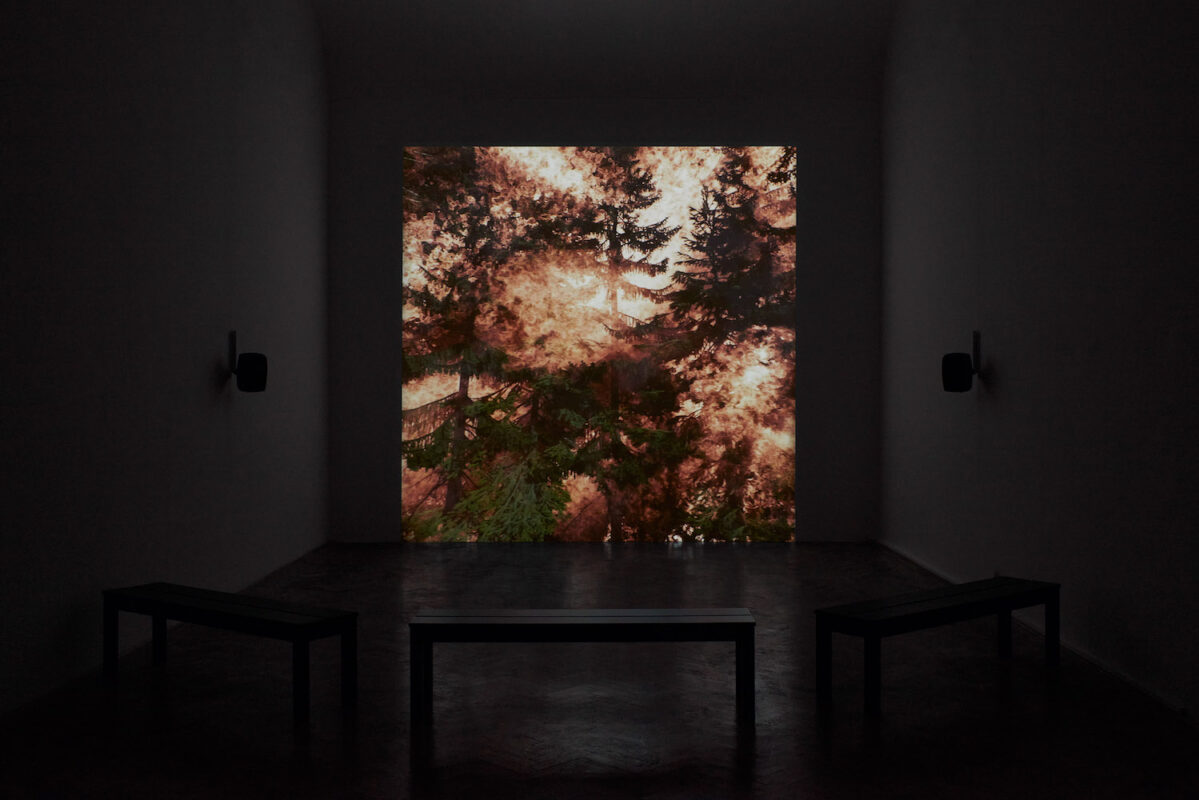 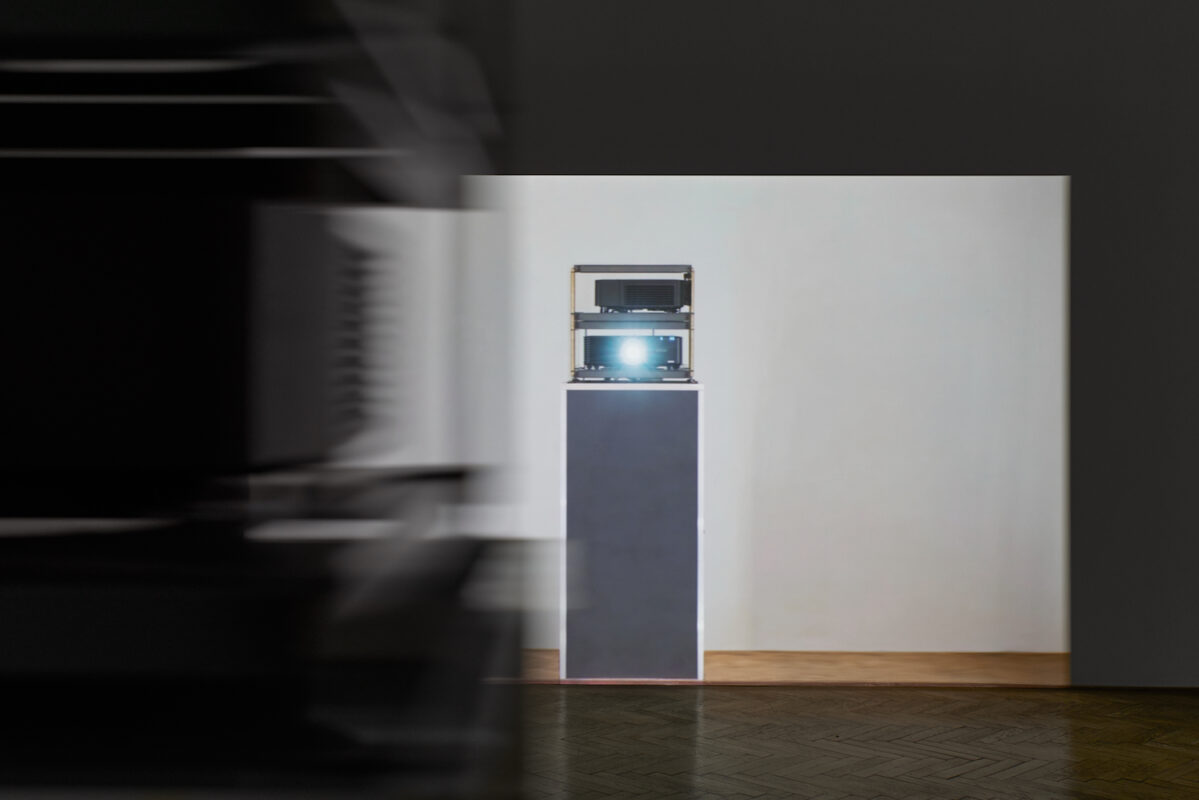 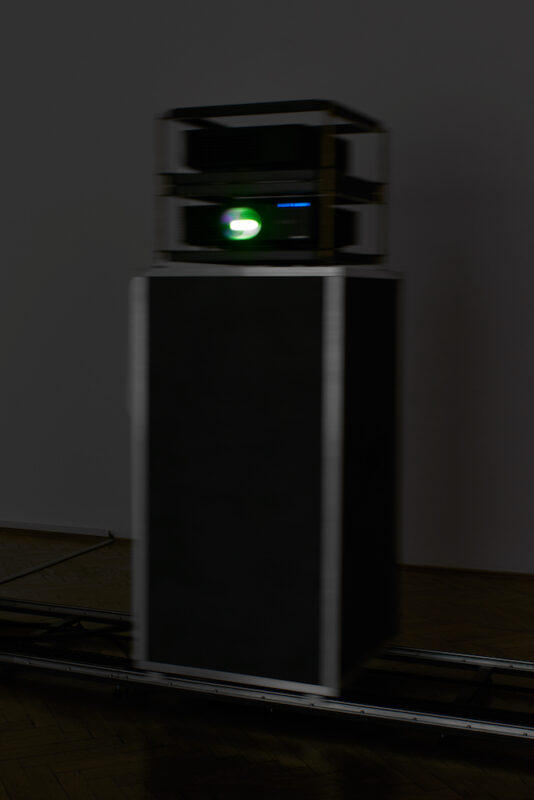 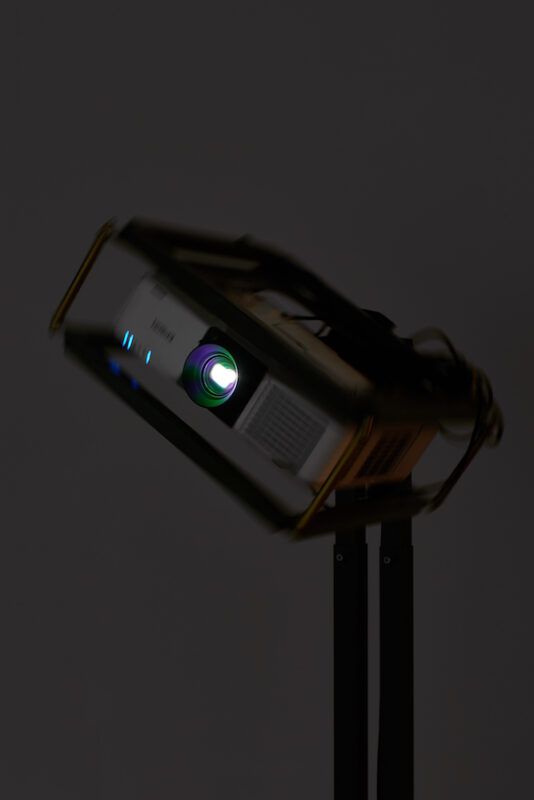 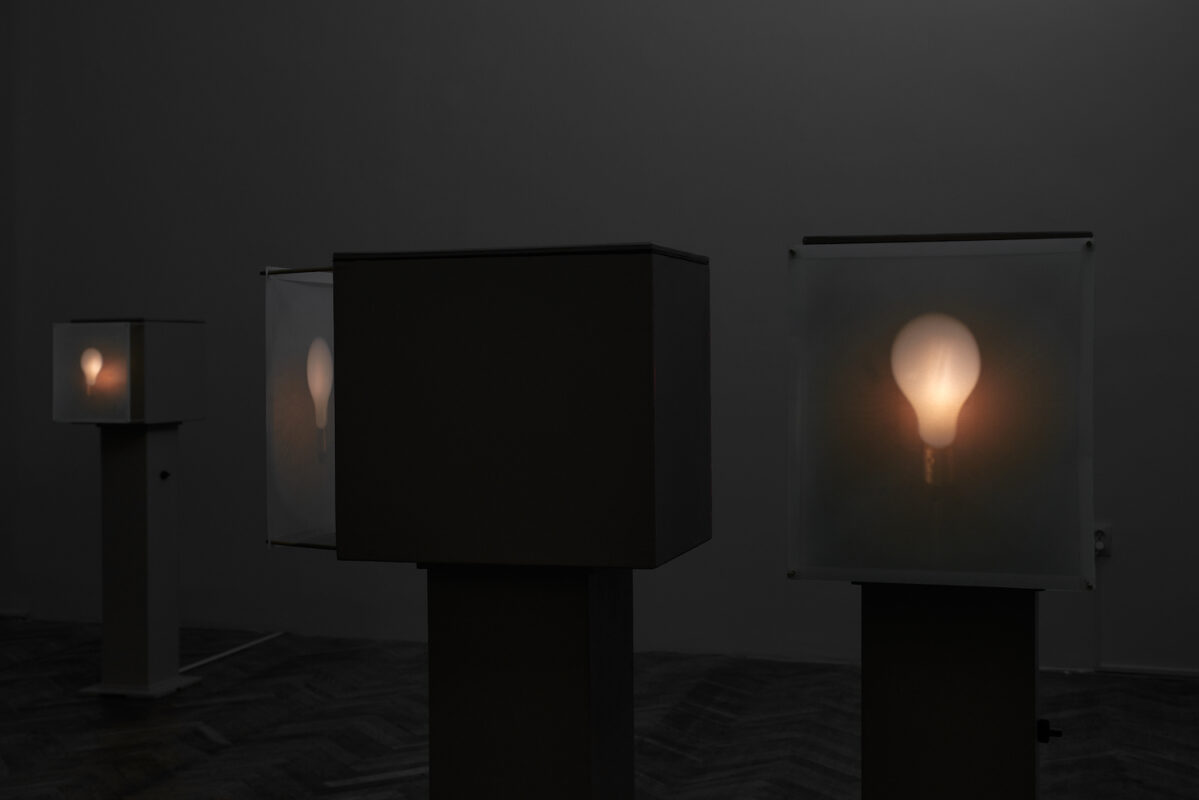 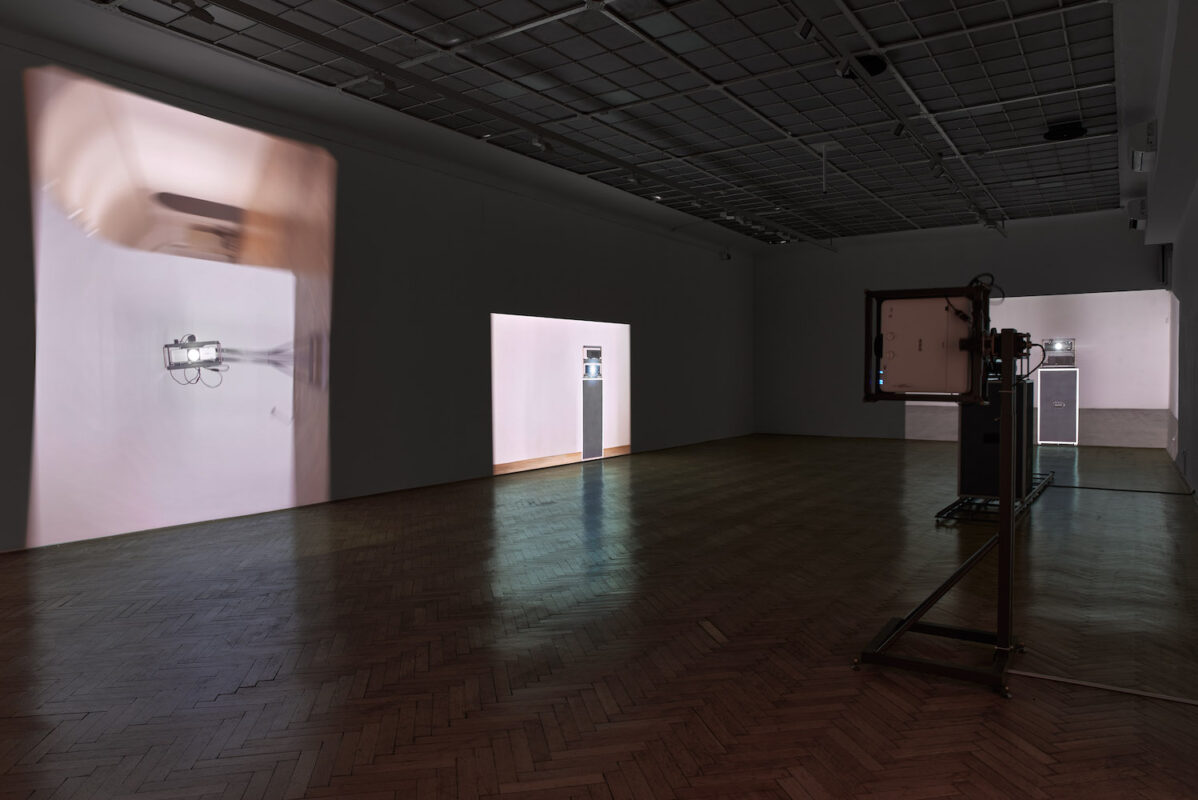 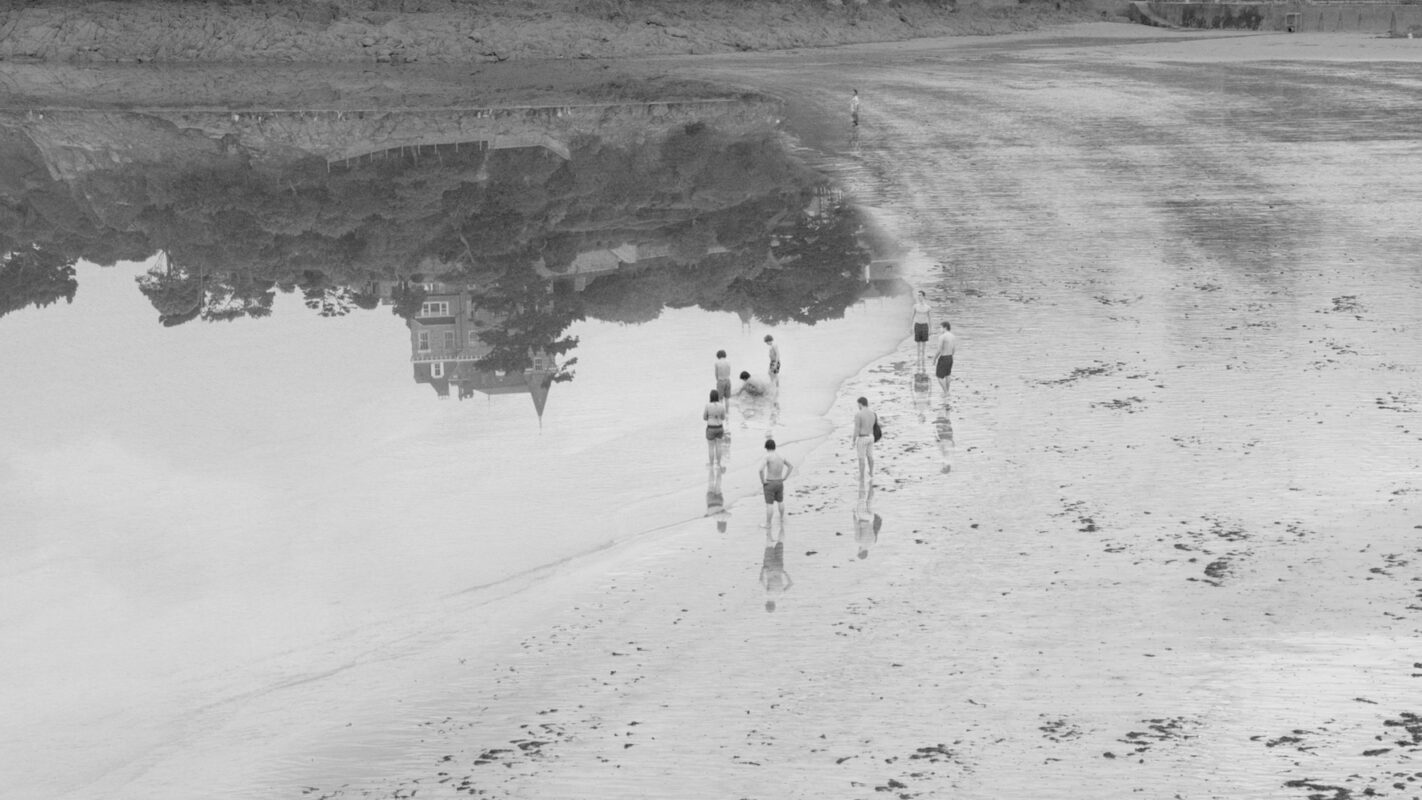 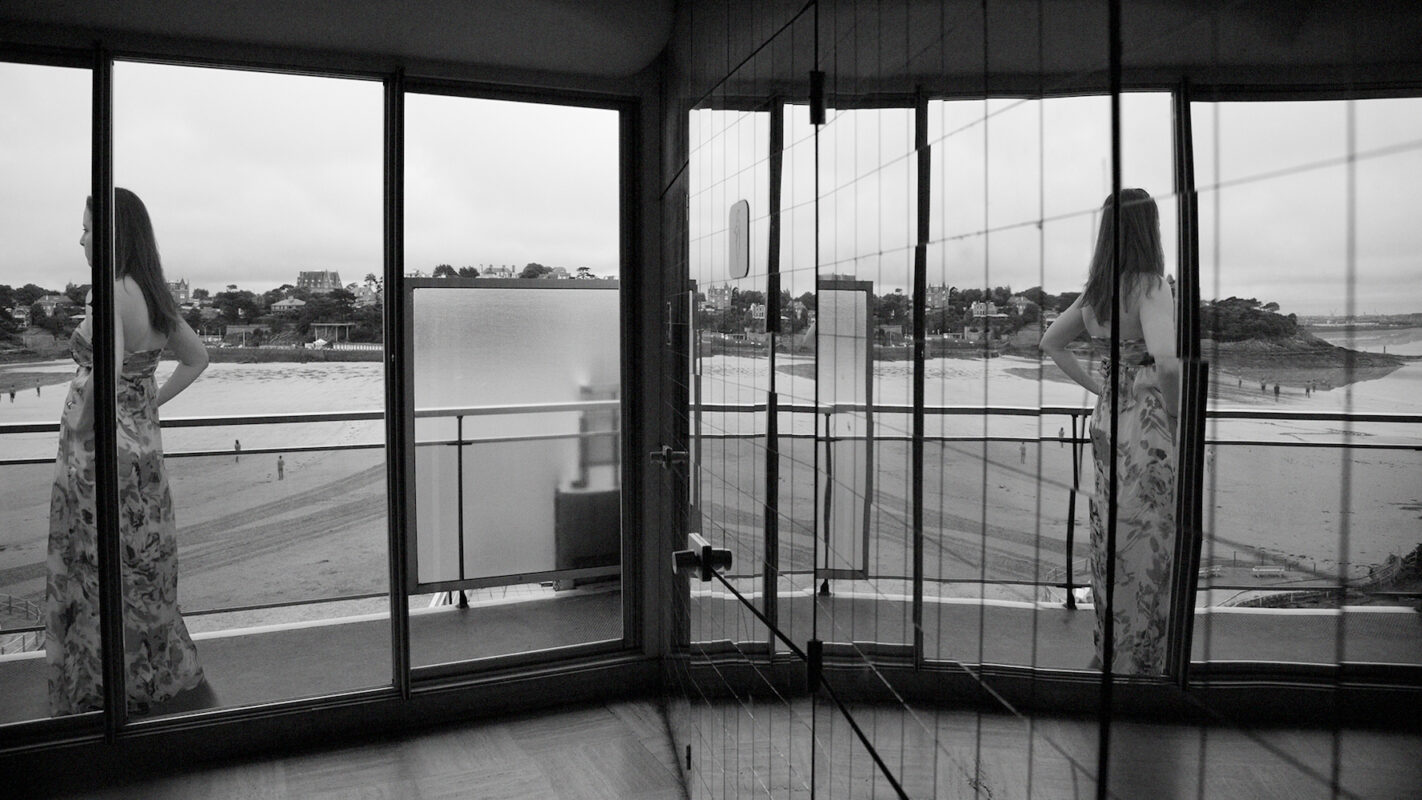 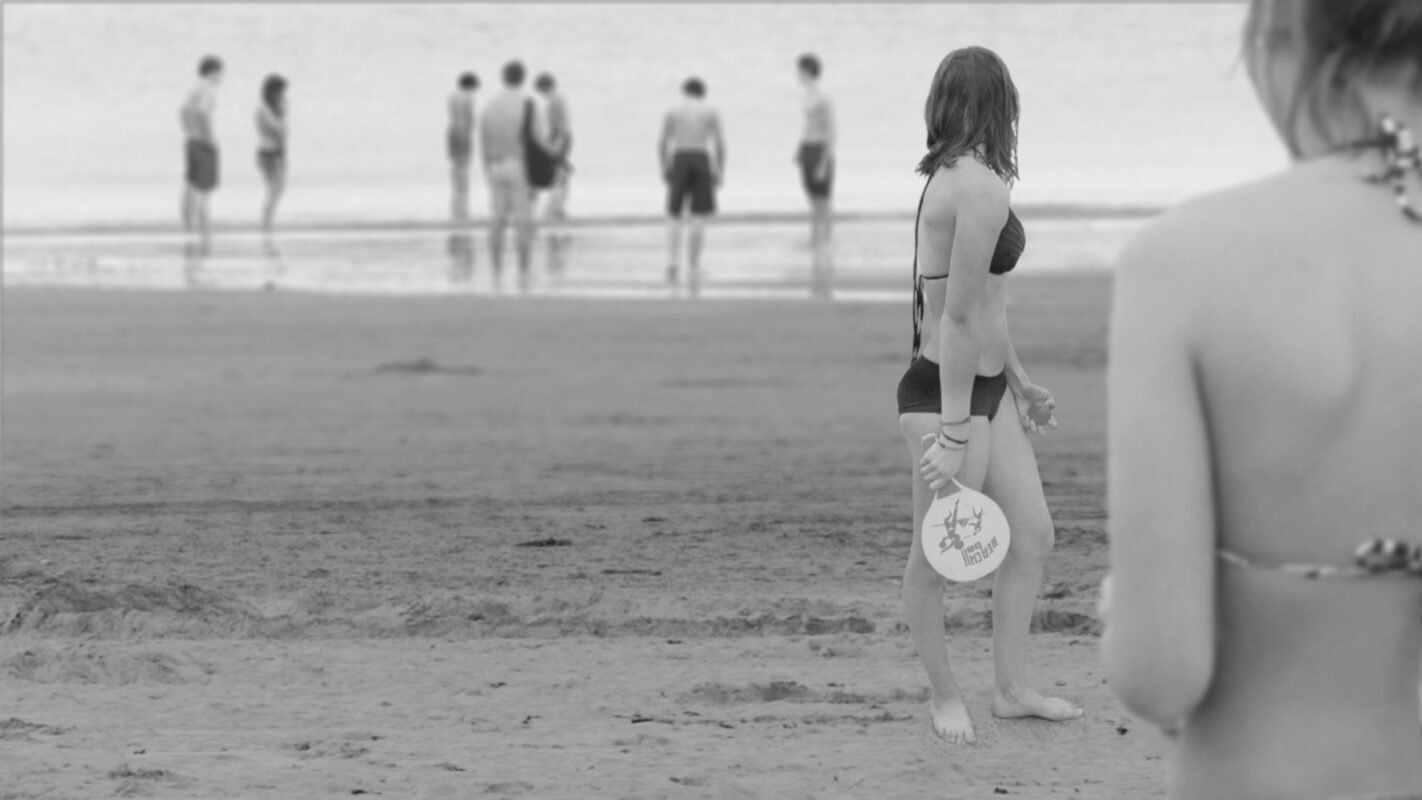 Duncan Wooldridge on an exhibition at the Robert Capa Contemporary Photography Center, Budapest, that unites works by two artists exploring different realities involved in image production: one as captured by the camera and another comprised of all that falls outside of that which is documented.

For the camera and its program, which sets out to record the world, there exists only the visible and the invisible: that which presents itself readily to be seen, and those things which become visible under the specific modes of observation that the photographic apparatus brings forth; at the other pole, there is that which escapes vision, either because they are difficult to observe as they are, or because their specific mode of appearance goes against the camera and its programming. What can be seen and what falls out of view has a strange relationship to what we believe is possible: it may be of surprise to note, as Kaja Silverman has revealed in her research on Louis-Jacques-Mandé Daguerre in The Miracle of Analogy (2015), that the elusive human figure in early photography led to proposals that the camera should be directed only towards those things which do not move. If humans could not be recorded, it was suggested, photographs should be directed only towards the inanimate. Nature and architecture were cited without irony as examples of good subjects for photography to pursue.

Such proposals, absurd as they might now appear, reveal that we are quick to accept and work within the limits of our devices, and this is as true today as it was at photography’s outset. Technology is configured towards enabling an ever-greater visibility and mapping, but is shaped by automation and presets that conceal as much as they reveal. Take, for example, the dialectic between the still and the moving, where the majority of images are both fixed and moving at one and the same time, mechanical and chemical realities being equal to the appearance of stasis. Complexity here is discouraged, and a discourse of arrestedness prevails.

In our culture of automated black box computation, the quantity of images dominates, but we are scarcely cognisant of this turn: on the one hand, we continue to feel bombarded, or overwhelmed – we see a lot of images every day: we have little time for videos of more than a few seconds. But contemporary photographic technology also uses this quantity in another way, stacking and amalgamating multiple images to produce sharp, stable and impossibly balanced exposures, at the same time as producing banks of data for the analysis of machine learning and its development. The sharpening of images, the three-dimensional and four-dimensional mapping of the world and programming of machine learning are interconnected, and deviating from this automation is increasingly complicated. Yet if we query the horizons of appearance and disappearance that take place in our technological processes, we quickly encounter complex realities: an amalgam of movements and a multiplicity of positions which offer compelling possibilities for thinking and acting through images.

In 1981, for a Hungarian exhibition Dokumentum, the painter Ákos Birkás wrote a text Anticamera, stating that two realities were possible: the first was one as captured by the camera, whilst the other would be comprised of all that falls outside of that which is documented. Birkás might have wished to critique the dominance of photographic depiction and leave a space for painting attached to the imagination and the possible, but his proposition – to examine that which falls outside of the camera’s view – drew attention to a logic continuous in the age of technical images: a choice between what László Moholy-Nagy would call production and reproduction, or continuation and invention. Photography presents this to us as in the starkest of possible terms: how would you like your reality: as we show it to you, or as a process of your own action and discovery?

David Claerbout and Gábor Ösz’s ANTICAMERA, at the Robert Capa Contemporary Photography Center, Budapest, places these questions and divergent strategies of image production into a dynamic view. Claerbout’s slow-moving, frame-by-frame assemblies of complex spatial environments, built in the black box of editing and rendering softwares, are brought into dialogue with Ösz’s structural examinations of light and projection, where motorised structures for film projection, and an inversion of the camera obscura, give the photographic apparatus a reflexive centrality. In ANTICAMERA, a tension between the technological and material encounter with the image takes place – ‘is our future mineral or computational?’, we might ask in another dialectical framing – but central to the exhibition becomes the role of image in not only representing but giving form to thought.

Claerbout’s poetic interest in the encounter that the slow-moving image retains a virtuosic assembly. He stretches the capability of the lens as a seeing device. The Quiet Shore (2011) collects images across what seems to be a single moment on the beach in Dinard, Brittany, where figures assemble on the beach and at the threshold of land and water. Viewed from multiple positions and weaved together in a splicing of positions possessing a stillness, the work moves between frames in a slow cinematic pacing that Erika Balsom has remarked is reminiscent of Chris Marker whilst focusing solely upon a single moment against the passing of narrative time. Wildfire (A Meditation on Fire) (2019­­–20) seeks a similarly impossible recording, representing the transformation of a forest, engulfed over time by smoke and flames, as the view traces the circumference of a spreading fire. Clearly not a document in any conventional sense, the work hovers between constructedness and its recorded materials which cannot be staged. Whilst The Quiet Shore subtly disrupts with bleached spaces, almost imperceptible movement and the layering of figures who interact across the montage, Wildfire replaces the intensity of the blaze with the movements of a rendered scene, tracing an accumulation of static images into a four-dimensional encounter. The virtual camera circles and pans, revealing momentary concretions of the fast-moving fire, with subtle ripples and motions amongst the arrest of the images’ terror.

With the complexity of its computational composition, the extended durations of Claerbout’s installations allow the viewer to consider the space of the filmic encounter, and to note that Claerbout’s elaborate construction is contained, made into a single screen projection with a singular source, its labour placed largely out of view. This is a sharp, animating contrast in the work of Ösz, whose works foreground the devices of camera and projector in order to construct a reflexive and site-sensitive meditation on time and place. Drawing one of the exhibition’s fault lines, the foregrounding or negation of the apparatus describes subtly the agencies of image-maker and image-viewer. Whilst Claerbout is interested in the black box and its vampiric capacity to construct a world without shadows, Ösz shows we are bound to complex physical phenomena of which we are rarely fully conscious.

Ösz’s Passive Movements (2021) are works in which a free-standing, motorised projector displays its own image and space onto a parallel wall. The projectors – here there are three in the room – are moving: one rotates in a continuous 360-degree clockwise motion, whilst two are fixed together, moving back and forth on a small dolly along a short track. In this second configuration, the projectors are directed towards different walls, so that one is panning whilst projecting across a parallel wall, and the other projects onto a wall whilst the dolly moves towards it before retreating to its other limit. In each projected image, the position of the projector stays exactly where it is: in the work moving side to side, edges of the frame appear to move left and right until they bump up against the end of the projector in view. Moving back and forth towards the wall, the projector scales big and small, and autofocuses, whilst the projector stays squarely in its original position.

Passive Movements constructs the appearance of stasis in a reflection on the condition of images ongoing movement and transformation, its active and consequential capacities. Although Ösz works regularly with the moving image, the photograph is invoked and examined (here perhaps is another contrast with Claerbout, who uses still images as material to construct sequences of time-based works). We desire stillness and the arrested image, just as we seek the passivity and objective condition of the lens for our understanding and claims to truth. Ösz shows this to be an inversion: we construct elaborate fictions, placing ourselves at the centre of an imagined oasis, with our stasis in the midst of continuous motion. The 360-degree rotating image is especially potent here, enabling not only a visceral mixture of stillness and movement, but also the possibility of thinking, something as large as planetary motion and the horizons of our conscious experience of the world. Drawing us towards physical phenomena at the same time as revealing reflexive conditions of the image places the technological image in its proper context of constructing and maintaining worlds.

This pivoting of position is something that is explored also in the last work in the exhibition, Image of Light (2022), in which Ösz inverts the model of the camera obscura so that light emerges and constructs an image from the inside, towards a room in a state of darkness. Several small box chambers in the space emit this light and the lightbulb contained within, which is caught on a sheet of translucent paper, receiving its focused image on the outside through the aperture. A shift in our physical position, and a switch in perception constructs a radical inversion of our capacity to think from the particular towards the planetary or what Édouard Glissant would call mondialité or worldliness, a being in and with the world.

ANTICAMERA, curated by Zsolt Petrányi and Emese Mucsi, suggests with a precision and economy that we find ourselves drawn between complex trajectories, in which the computational and physical (or mineral) experience of the world needs urgently to be apprehended to encounter the world in its full detail. Beyond polarities, there are competing directions and passages, emphases and urgencies. What is at stake is not only what is shown, but what is made visible or placed out of view: this is the condition of the struggle of images, which Ösz’s rotating projection encapsulates in its prompt to think not only of the image, but of its making and its consequent position in and with the world.♦

Installation views of ANTICAMERA – An exhibition of David Claerbout and Gábor Ösz at the Robert Capa Contemporary Photography Center, Budapest from 16 February – 3 April 2022.

Duncan Wooldridge is an artist and writer. He is Course Leader for the MA in Fine Art Photography at Camberwell College of Arts, University of the Arts London, and is the author of To Be Determined: Photography and the Future, published by SPBH Editions.