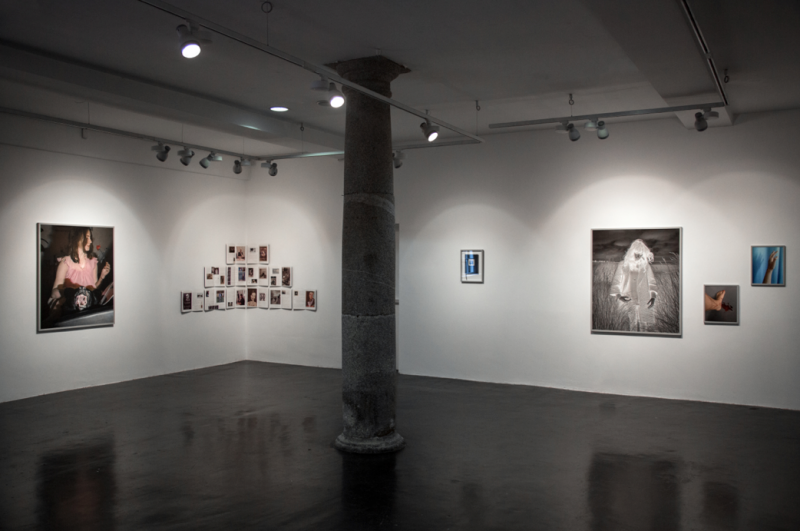 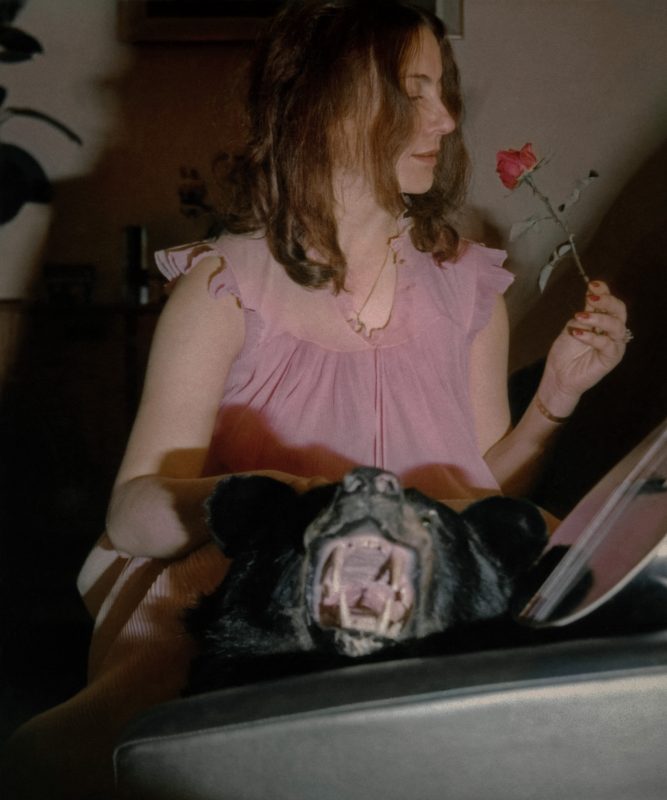 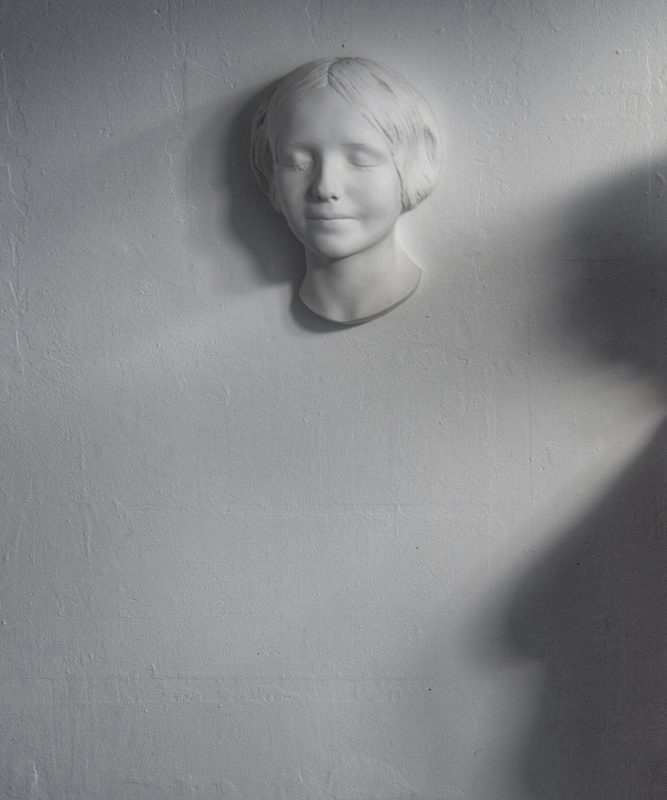 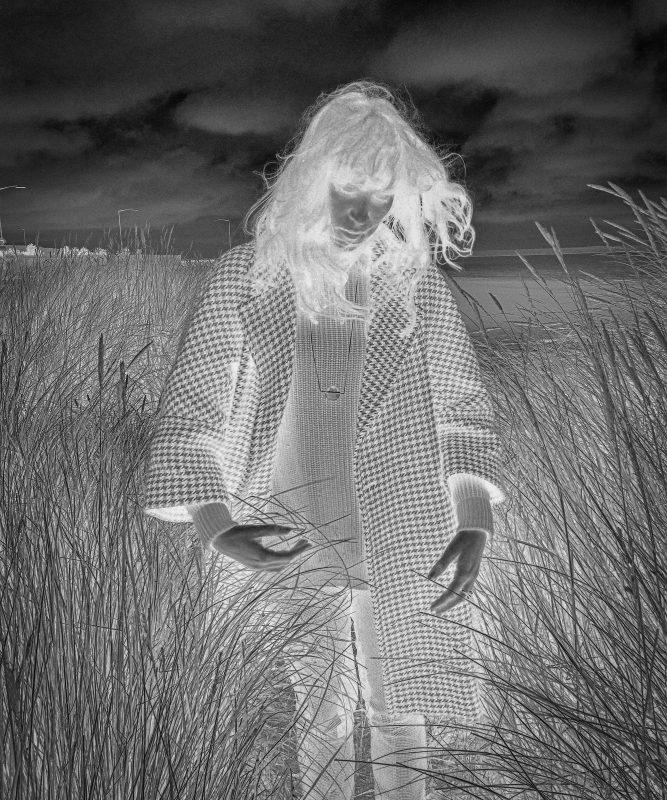 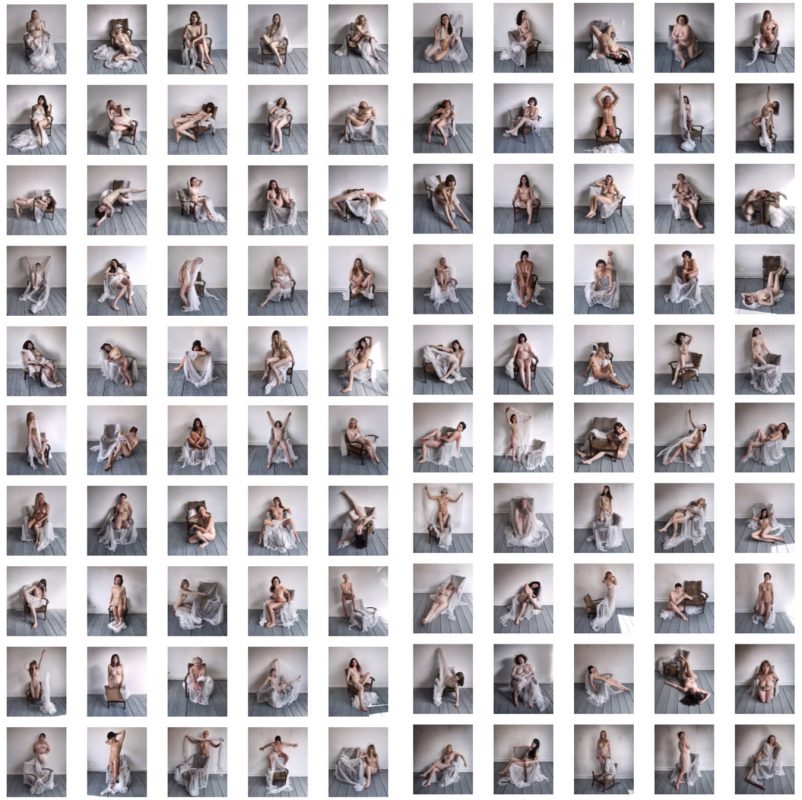 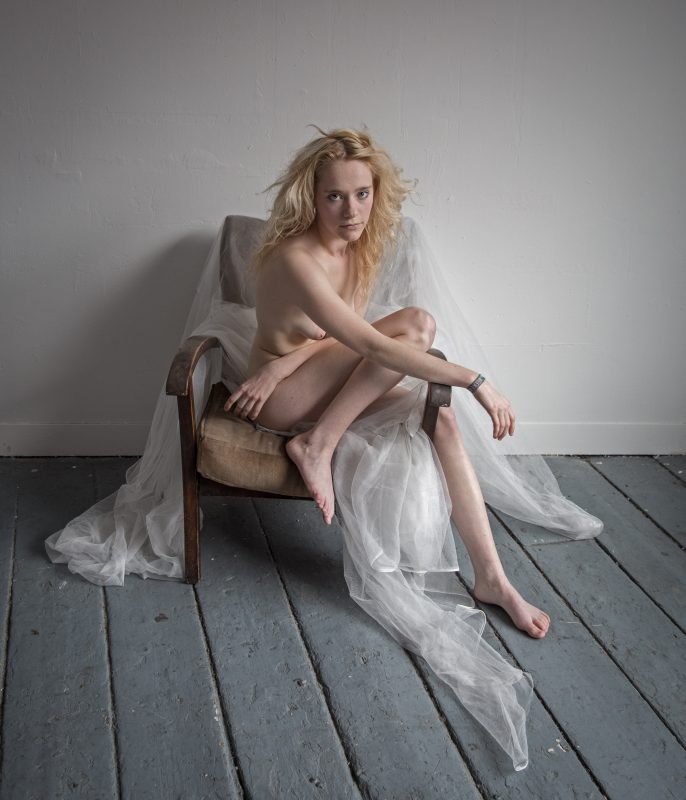 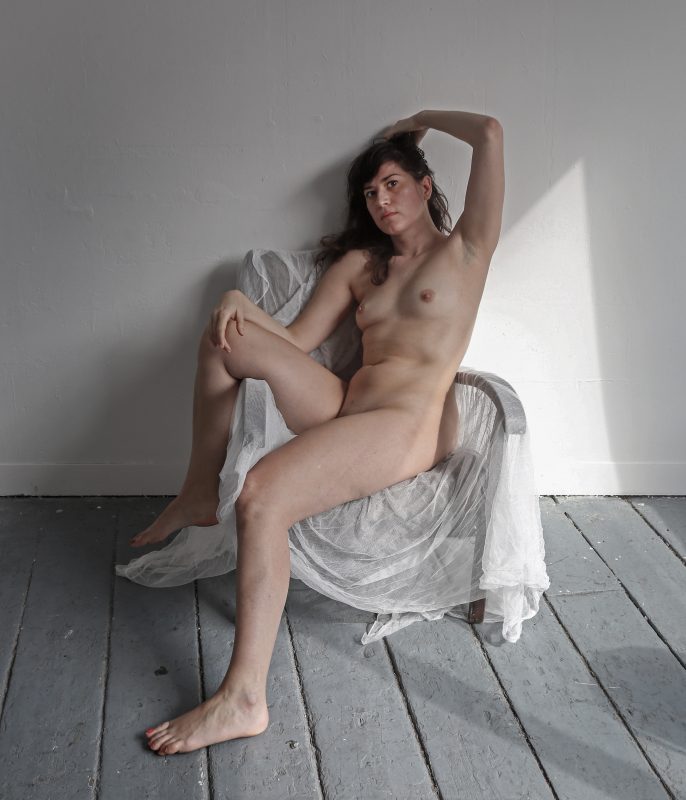 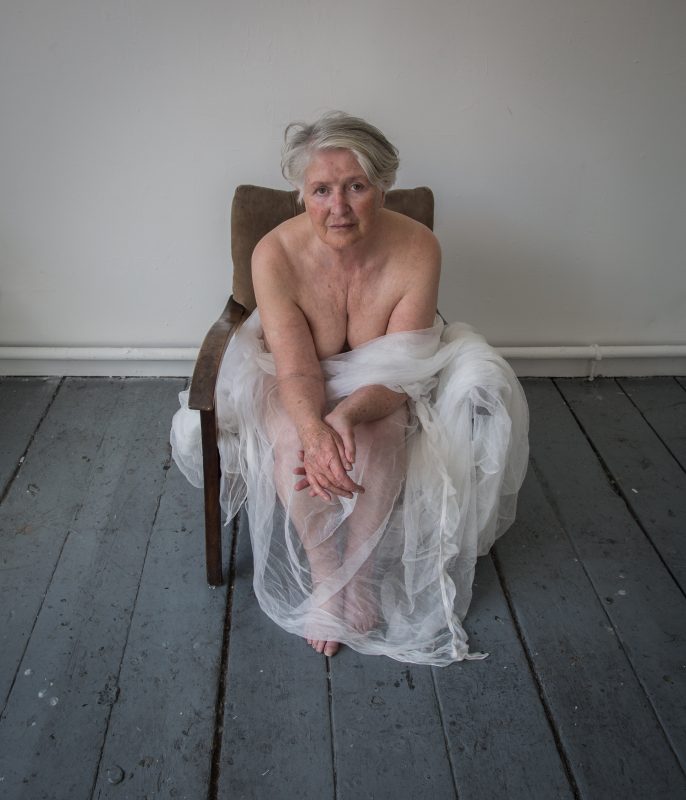 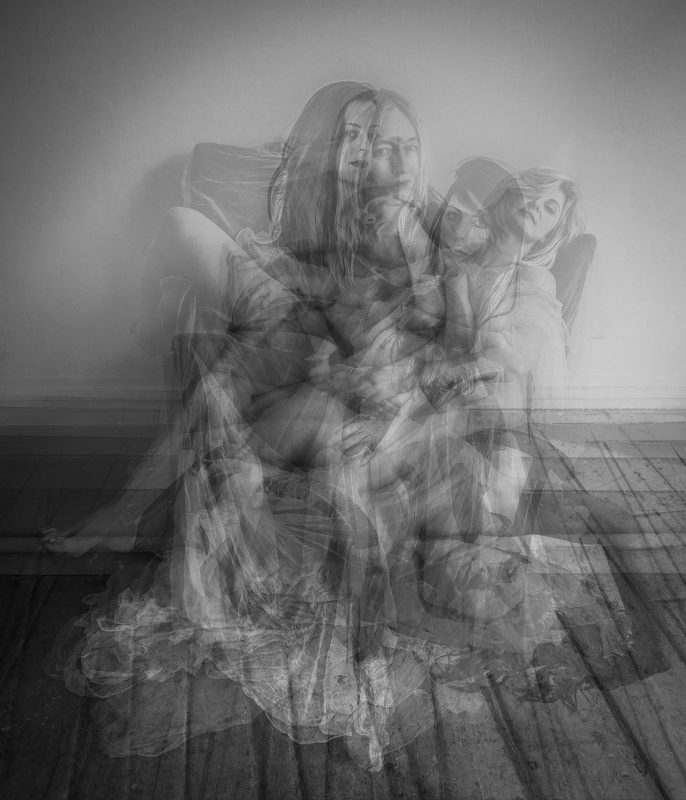 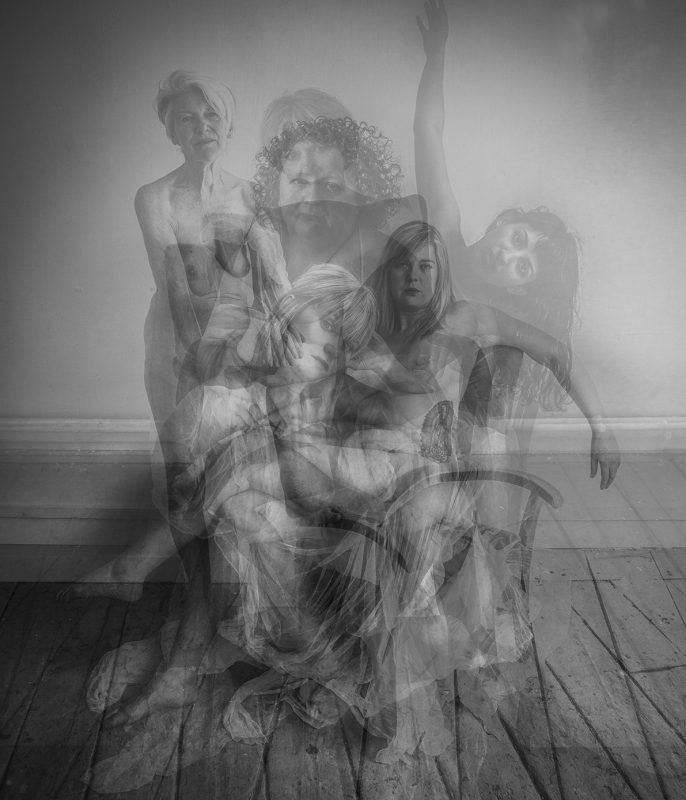 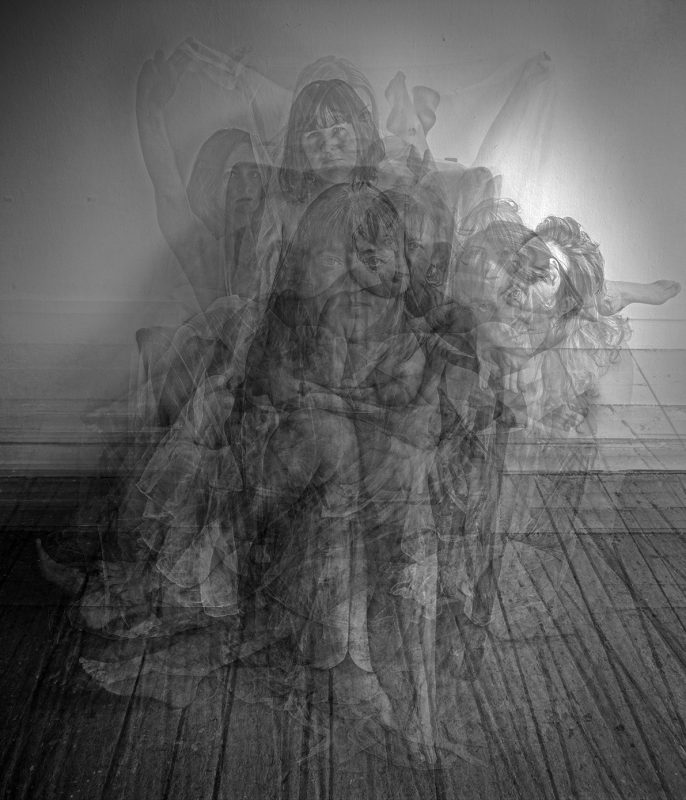 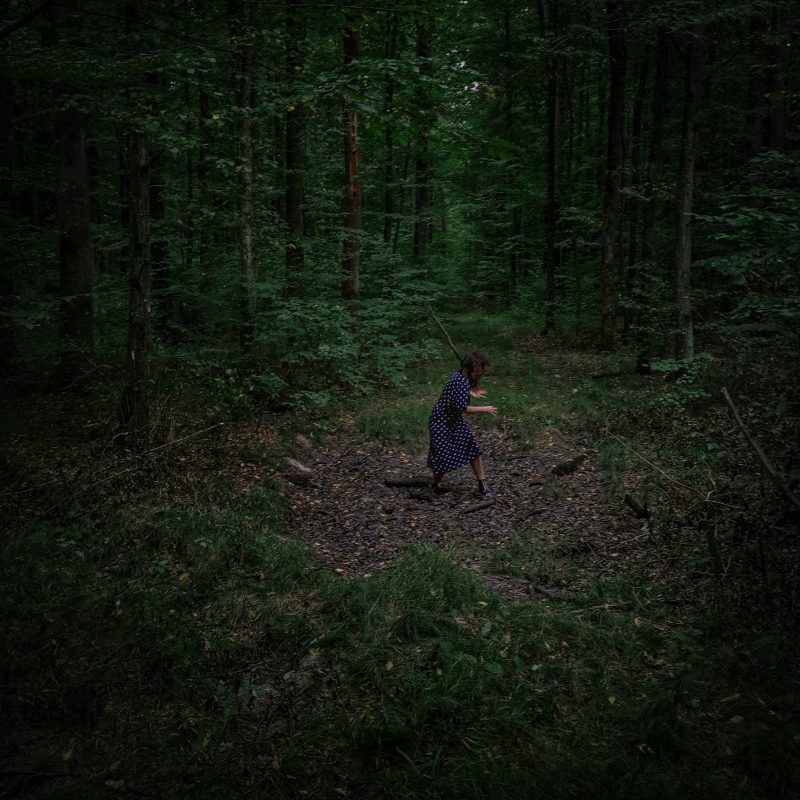 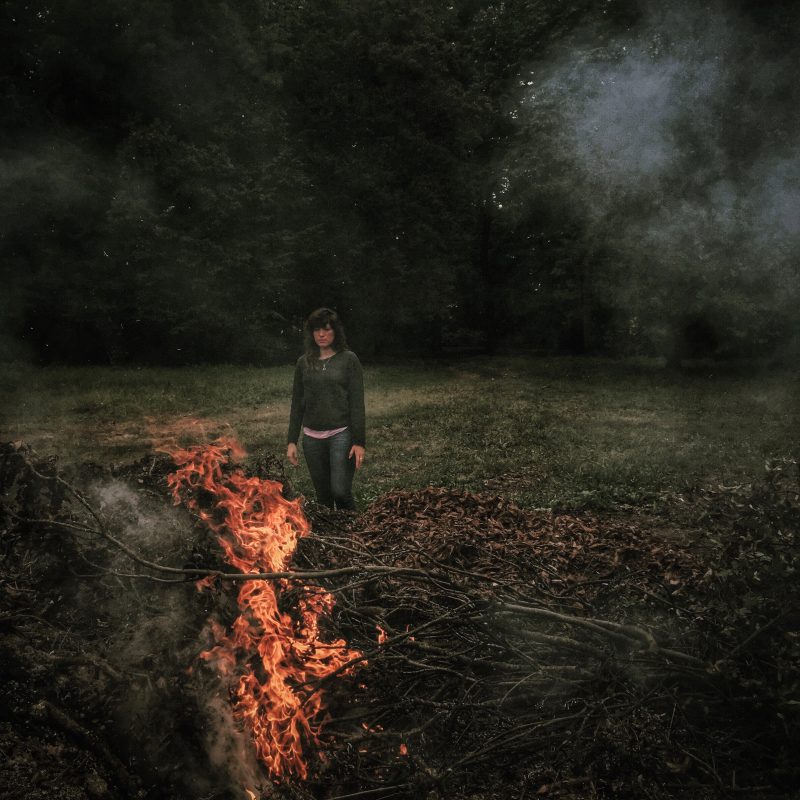 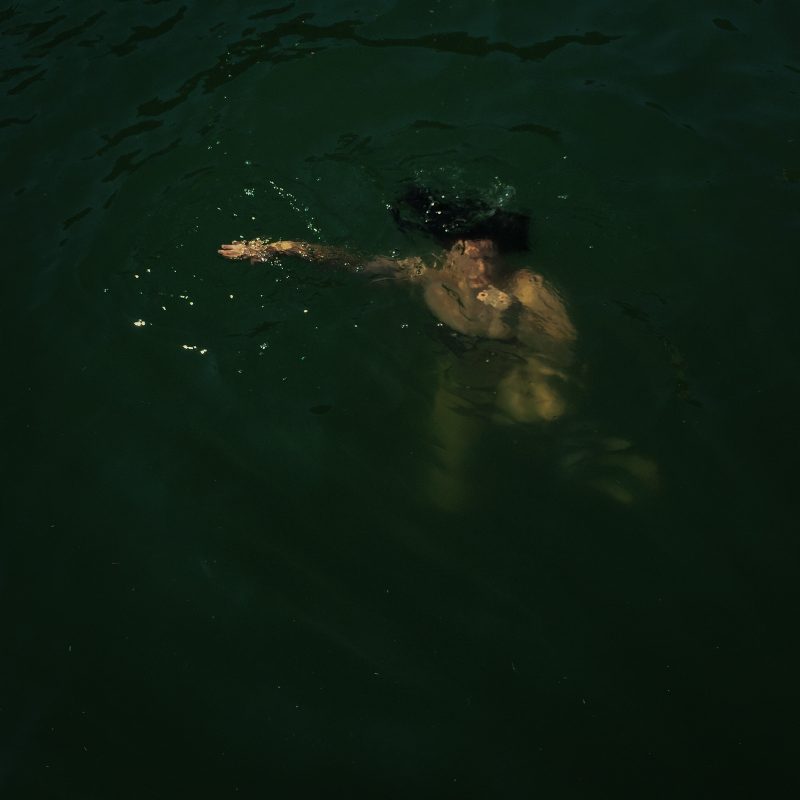 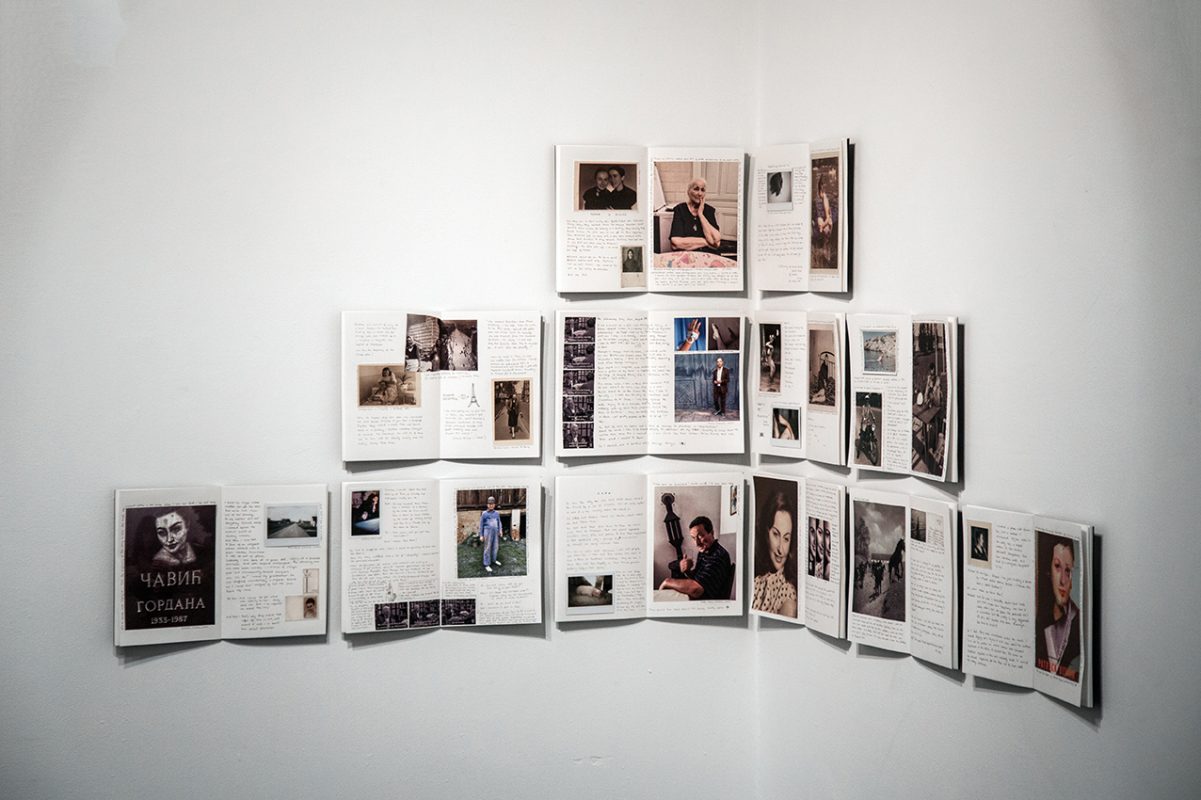 In 1954 a farm girl disappeared from a village in rural Yugoslavia. She supposedly popped out for a doctor’s appointment but never came back. Rumour has it that she fled to Paris where she led a double life as a spy and a prostitute up until her death in the 1980s. Recovered from her few personal belongings, was a colour photograph in which she is seen striking a curiously unsettling pose – one that exhibits a hypnotising yet ambiguous charm. Heavy-lid and with her lips on the verge of pronouncing an inner score, she looks dotingly at the rose in her hand. In front of her a taxidermy of a bear’s head – its gleaming eyes and jagged teeth – destabilises the apparent harmony of the composition.

Almost a century earlier, in Paris of the late 1880s, the body of a young woman was allegedly recovered from the River Seine. Memorialised by means of death mask as a bid to identify her – a popular morbid fixture in the years to come – her breath-taking beauty was celebrated by artists and writers alike, including Man Ray, Rainer Maria Rilke and Albert Camus to name a few. Maurice Blanchot’s account perhaps describes the tragic figure best: “A young girl with closed eyes, enlivened by a smile so relaxed and at ease… that one could have believed that she drowned in an instant of extreme happiness.”

These two female characters serve as the protagonists of My Own Unknown, the latest body of work by Dublin-based photographer Dragana Jurišić, an on-going series comprising five fascinating chapters due to culminate into a fictionalised biography. Combining text and photography, appropriated imagery also intermingles ruthlessly with notebook texts, video and performance, across diverse creative processes and narrated through differing voices. Hybrid and complex, My Own Unknown defies classification – its overlapping of languages, registers and motifs reflect the eclectic and expansive aesthetic and intellectual world of its author, Dragana Jurišić.

Jurišić is a photographer, writer and video artist who came to international attention in 2014 with YU: The Lost Country, an emotive, first person account of her return ‘home’ to former Yugoslavia, which broke up in 1991, after a decade of living abroad. Presented as an installation and a book, the work draws upon the memories and aftermath of war. My Own Unknown, currently on show at Oliver Sears Gallery in Dublin as part of Photo Ireland 2016, quickly reveals itself as Jurišić’s most intimate autobiographical confession to date. Here the journey is accentuated. Taking the tainted life of her long-lost aunt Gordana Čavić and the symbolic connotations of L’Inconnue de la Seine as a point of departure, it sets forth a highly personal tale that explores the turbulent perceptions of femininity and its ricochet through art and family history.

While Čavić and L’Inconnue de la Seine are ostensibly the subject of the first two chapters of My Own Unknown, their presence and actions determine much of the rest of the story. They function as two mirrors for Jurisic’s own re-enactment of self in a triangle of female identity. Both are imagined rather than experienced – in a manner similar to André Breton’s 1928 autobiographical novel Nadja that chronicles his brief ten-day affair with an unknown woman. Nadja, the protaginist in this seminal surrealist work, gains validity the moment she becomes approved by the author’s colleagues. As soon as Breton fixes her within his consciousness, he abandons her. Romance fades and Nadja is ultimately committed to a sanatorium where she sadly belongs.

Jurišić’s female protagonists seem to fall in the same category. Both haunt the fantasies of others – Gordana is a sexual muse whereas L’Inconnue is the new Mona Lisa for artists. Like Nadja, they are not entirely real but worshipped “souls in limbo”, grounded in absence as opposed to historicity. Unlike Breton’s treatment, however, Jurišić’s fable soon reveals with bitter melancholy and resignation that the essence of the story is violence, cruelty and oppression. Moreover, it goes further to negate the ideal of female beauty, suggesting the possibility of a quieter historical reading of femininity.

In the project’s subsequent chapters, Gordana and L’Inconnue become the starting point of something more subversive, something by and for women. The passive muse is resurrected as an active agent, unleashing a visual narrative of a different kind – the romantic fable rolls over to a political impulse.

Chapter 3: 100 Muses sees 100 women from Dublin, aged between eighteen and eighty-five, respond to an open call to be photographed nude. Jurišić invited them to pose as one of the nine Muses of Antiquity, holding a replica of L’Inconnue death mask and two props: an old, throne-like chair and a cheap curtain that could be used as a drape to cover their naked bodies should the subjects wish to use it. Upon finishing the shoot, Jurišić asked them to select the portrait that best represented with the intention to empower her sitters and reflect openly on their relationship with their bodies. The final portraits of these Deities of Fertility looking back at the camera possess a primitive, earthly beauty. Free from eroticism, their exposed bodies create a ritualistic typology that challenges iconographical clichés – physical manifestations and reinventions of the romantic ideal of the muse and by-products of the complicity between the author and her sitters.

In chapter 4, Her Mother and Her Daughters, Jurišić proceeds to digitally overlay the portraits of women who identified with the same muse, generating nine collective portraits in total. A stratigraphy of these layered portraits results in Mnemosyne, the daughter of Gaia and mother of the Nine Muses. What emerges is synthesised phantasmal taxidermy of skin and visages, the image of “The Mother” is the overlap of all. It condenses the maturity of different lives and skins, against the weight of immortality and idealisation.

Don’t be afraid to look into a shadow, the fifth chapter of My Own Unknown, plunges the viewer further into its remixing of female identity as a renewed collective meta-fiction. A video puts in motion the stories of all these women, with Jurisic placing herself in front of the camera. Here, her identification with her aunt Gordana Čavić is crystallised. They share, in her words, the same taste for adventure and braveness. They also share the awareness of an innocence lost in the depths of a river.

Jurišić used the Super-8 camera her aunt left behind to re-enact a life that was censored. The viewer is asked to access these short films through the holes of a series of black boxes. It is hard not to detect parallels between this diorama-like assemblage and Marcel Duchamp’s major artwork Étant Données. An unexpected and unimaginable landscape, visible only through the peepholes, communicates an intense experience of accessing a life shrouded in mystery, but imagined this time by women. In these rolls of film, women emerge as the ‘other’ – that which cannot be grasped, comprehended or penetrated, but only felt and sensed, the same way as war, displacement and tragedy. If male identity by normative modes operates as a solid narrative object (an object that “is what it is”, according to Jean-Paul Sartre’s definition), My Own Unknown resets femininity as a restless imaginative space for to open up thinking on micro-histories of women that were either mythologised or buried in the tomb of history.

My Own Unknown is existential attempt at self-knowledge, where female muses emerge and vanish like shadows against a veiled backdrop. Pulled ashore from a river of mystery, they partially regain life. When not covered by a mask, their gazes are firmly addressed towards the camera. And yet, despite their urge to overcome vulnerability, they slip once more into a tranquil death in the area of meaning. There is much sadness and latent resignation infusing these bodies. There is an awareness of futility amidst our turbulent, disappearing times. There is the acknowledgment that recession into absence is the final redemption. Bodies are deemed to vanish, to fade. ♦

All images courtesy of the artist. © Dragana Jurišić

—
Natasha Christia is an independent writer, curator and educator based in Barcelona. She was recently the Guest Editor at the Read or Die publishing fair in Barcelona during November 2015 and Curator of DocField Documentary Photography Festival, taking place during May and July 2016, entitled, Europe: Lost in Translation.