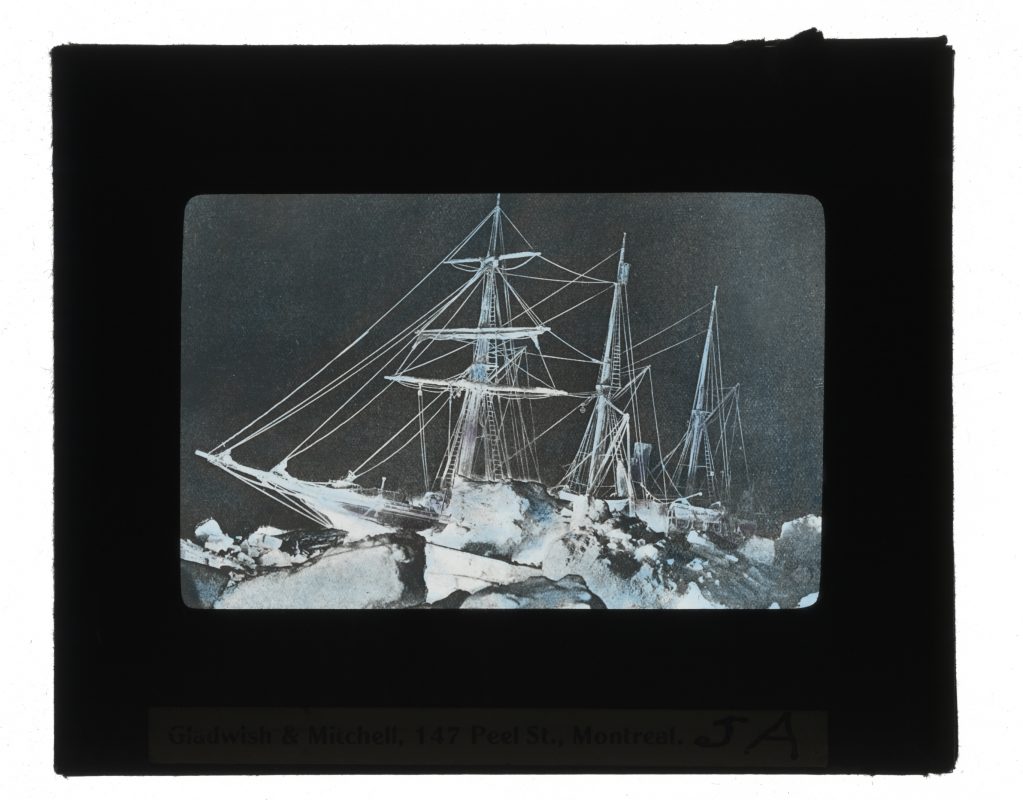 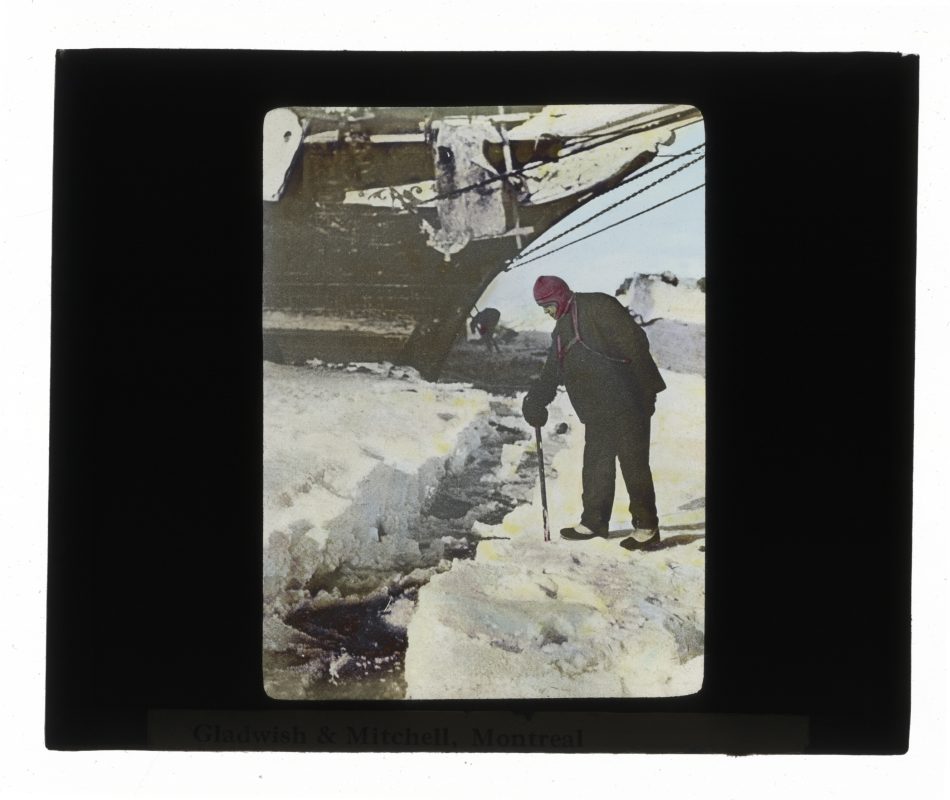 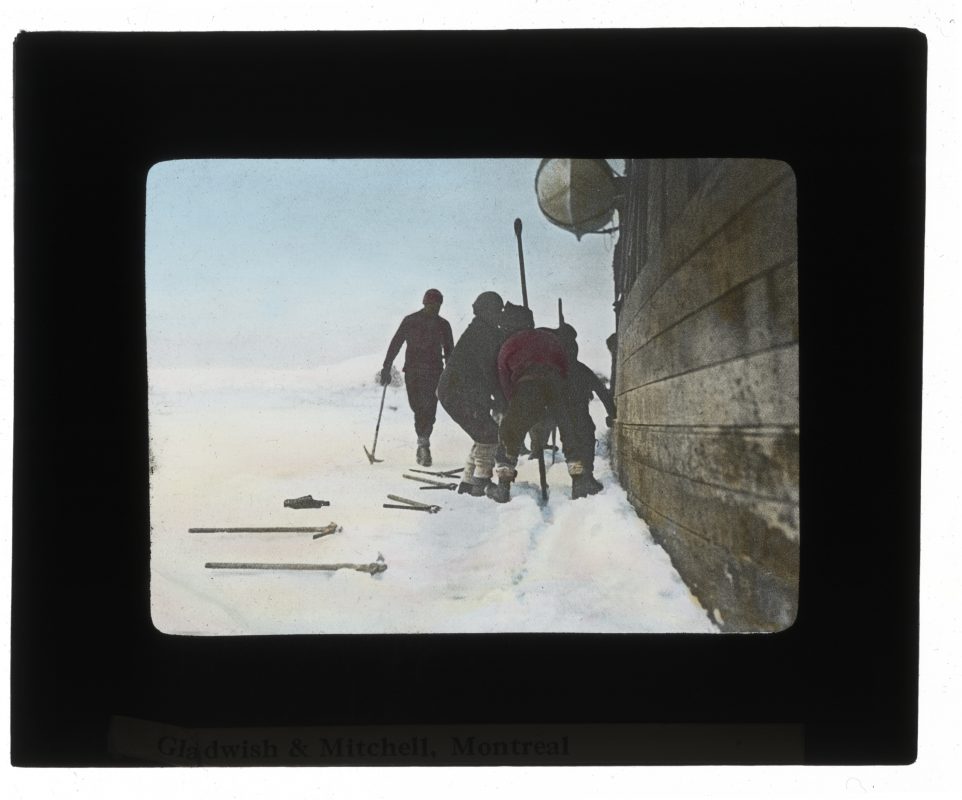 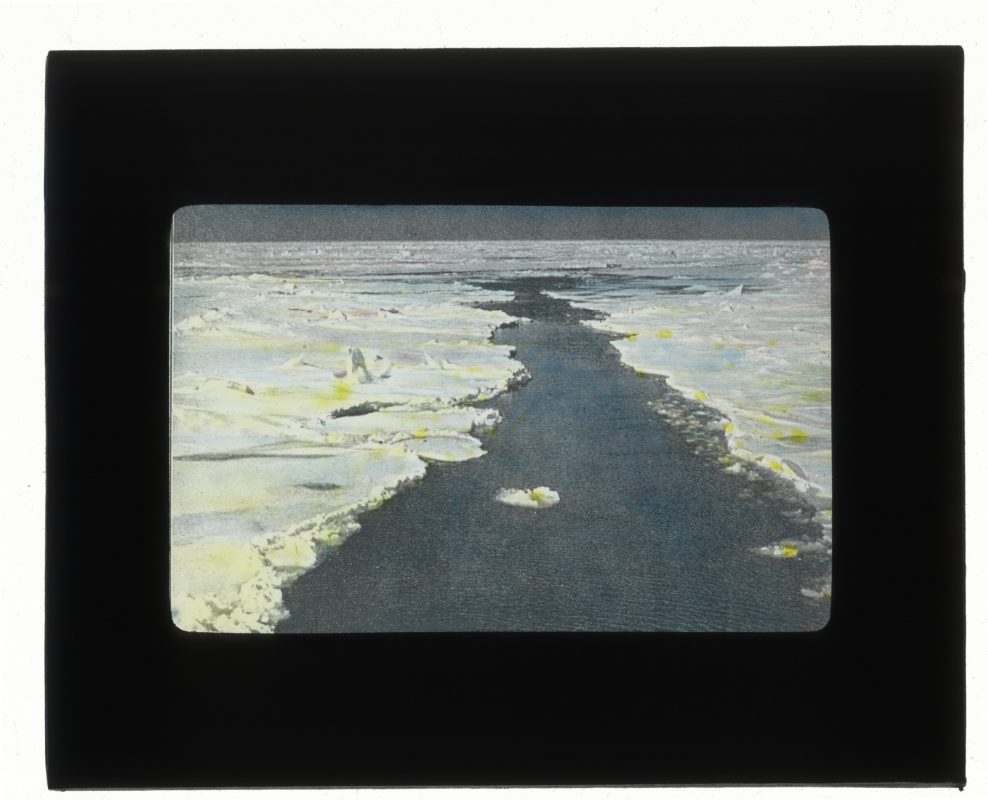 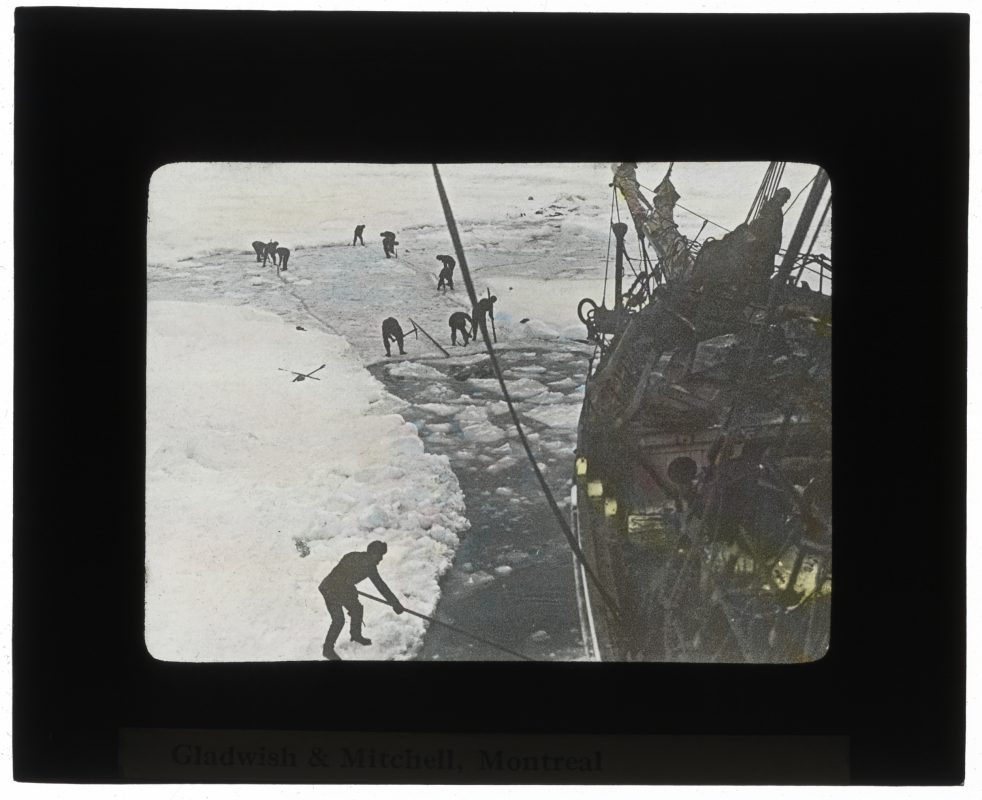 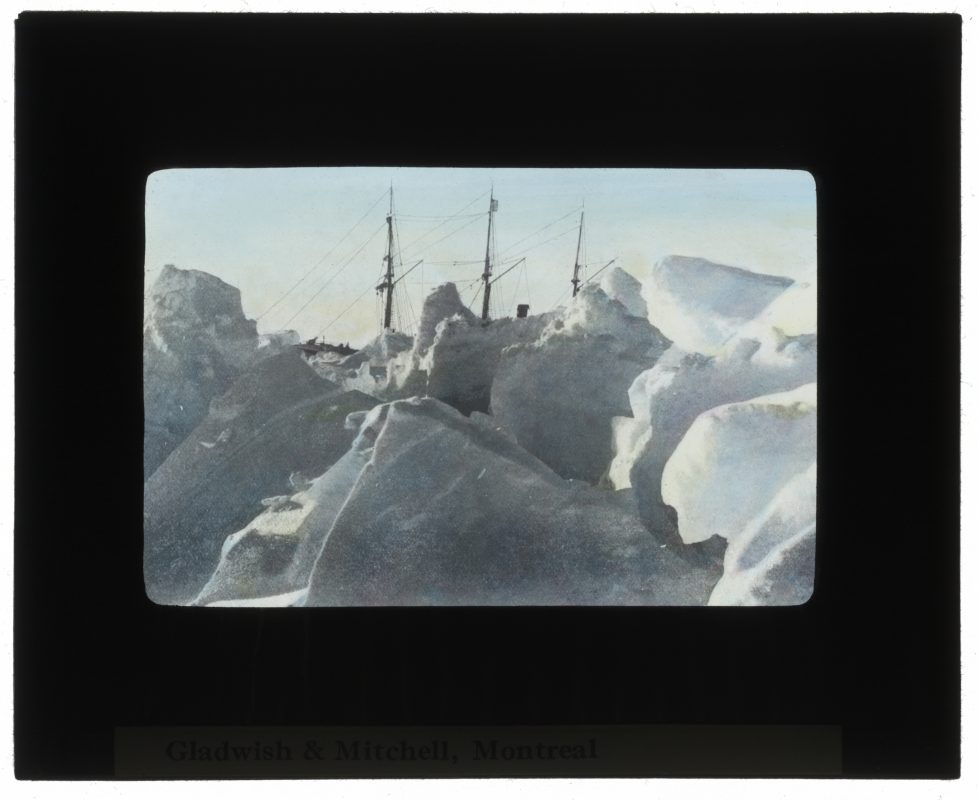 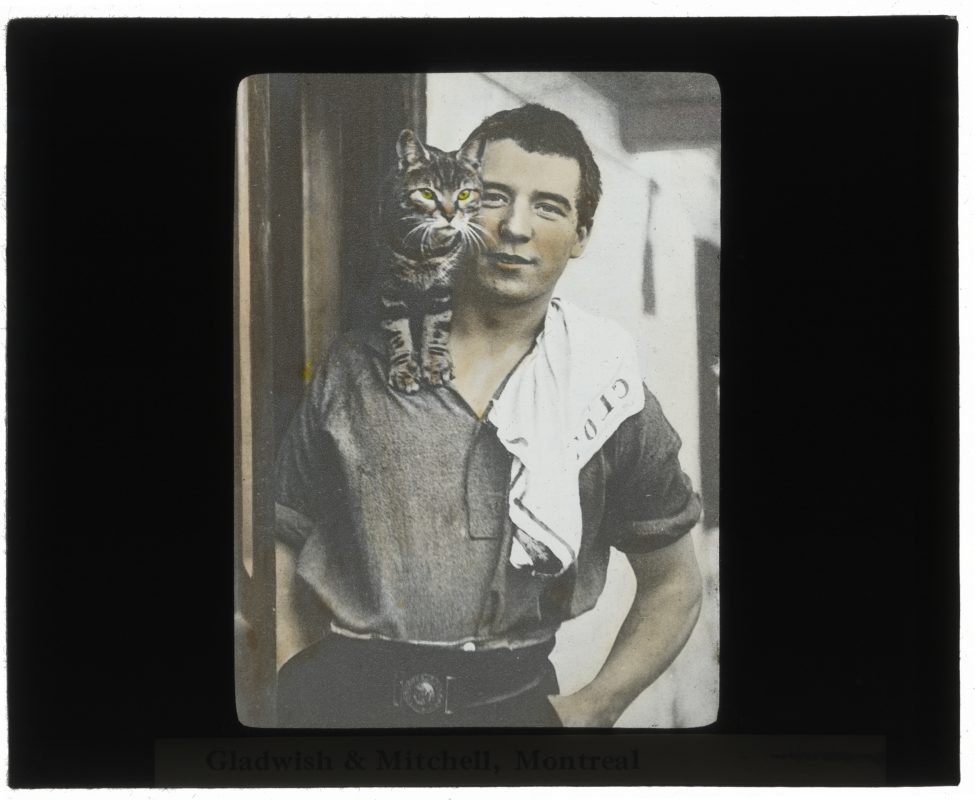 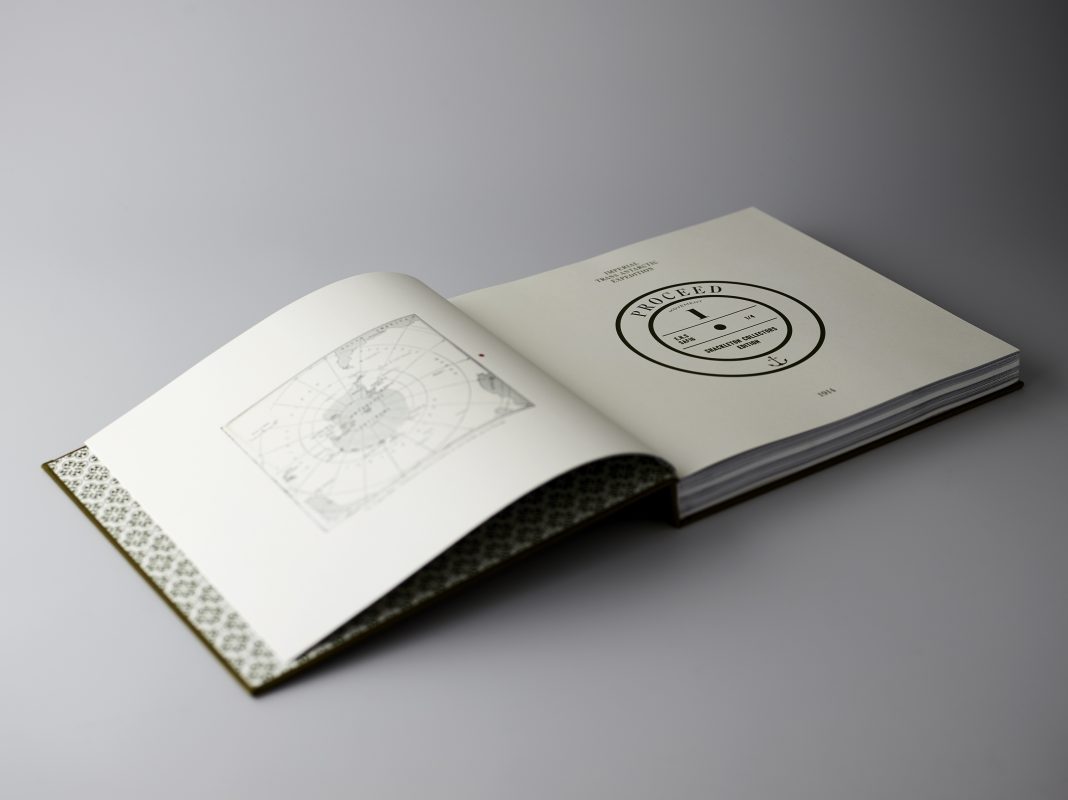 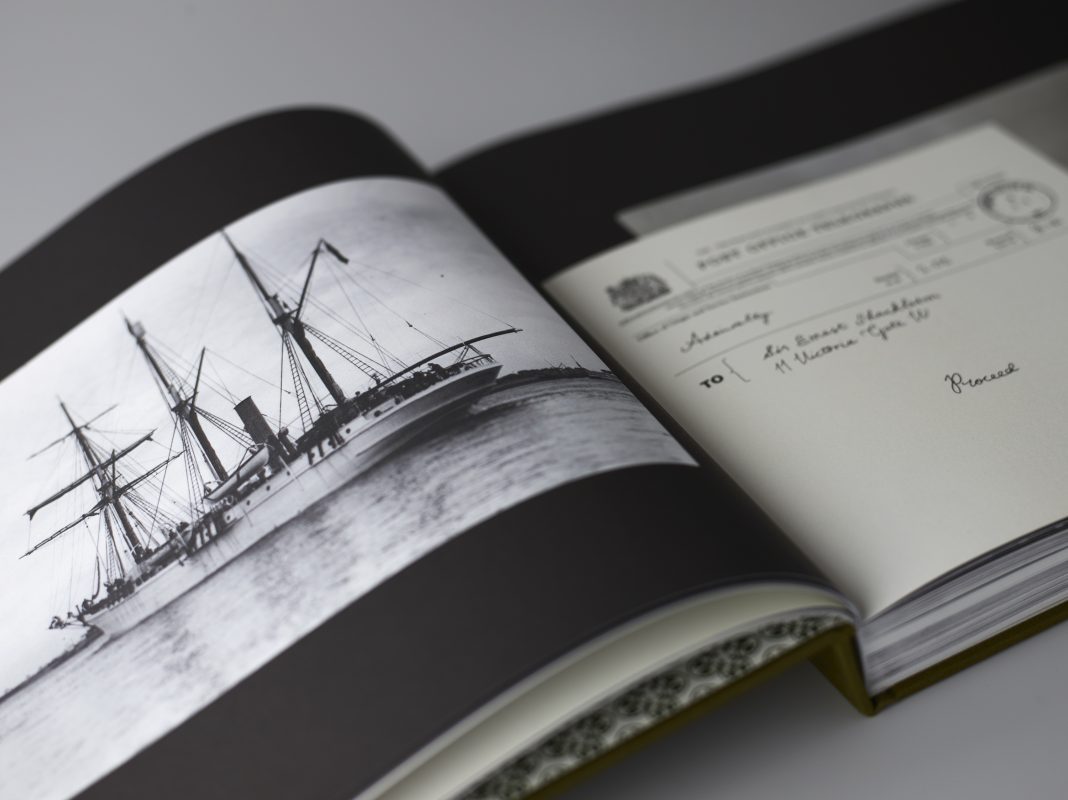 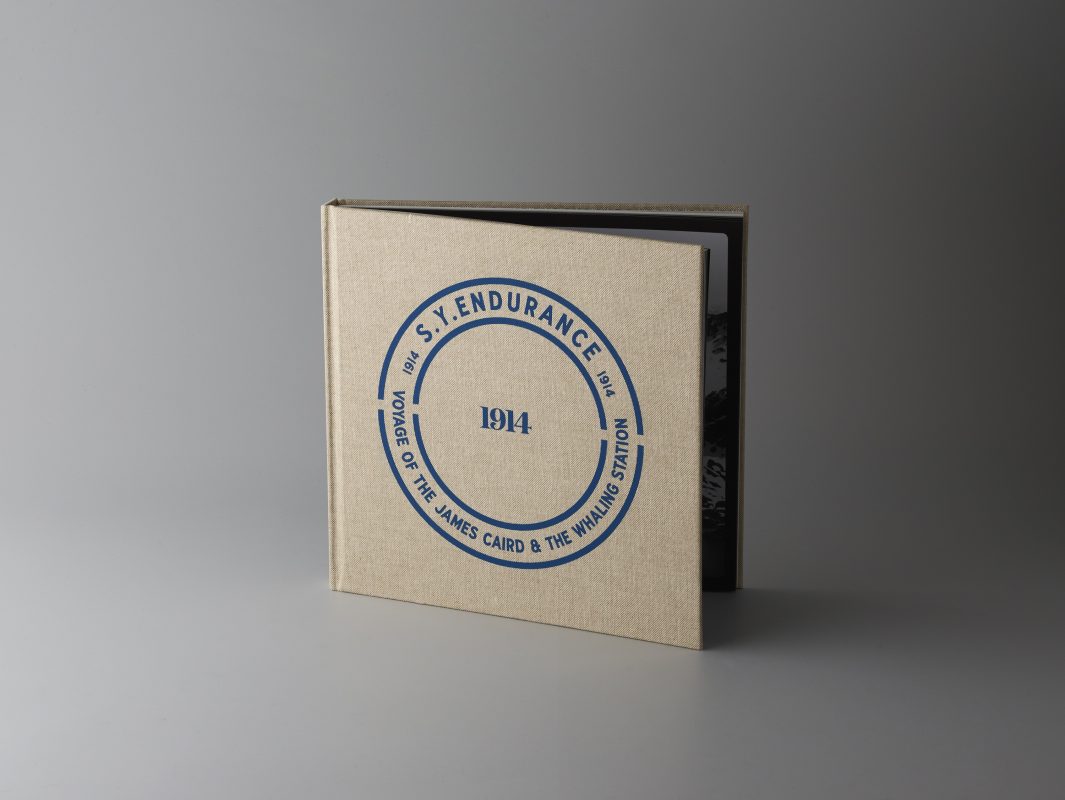 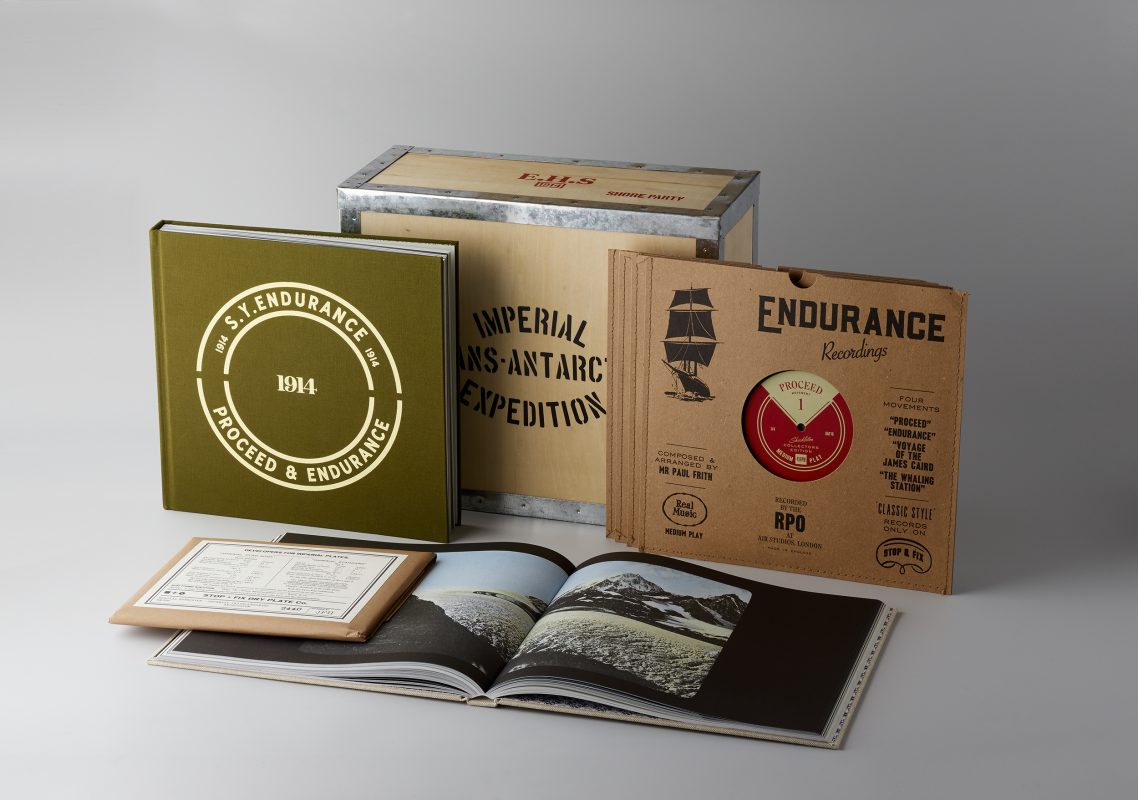 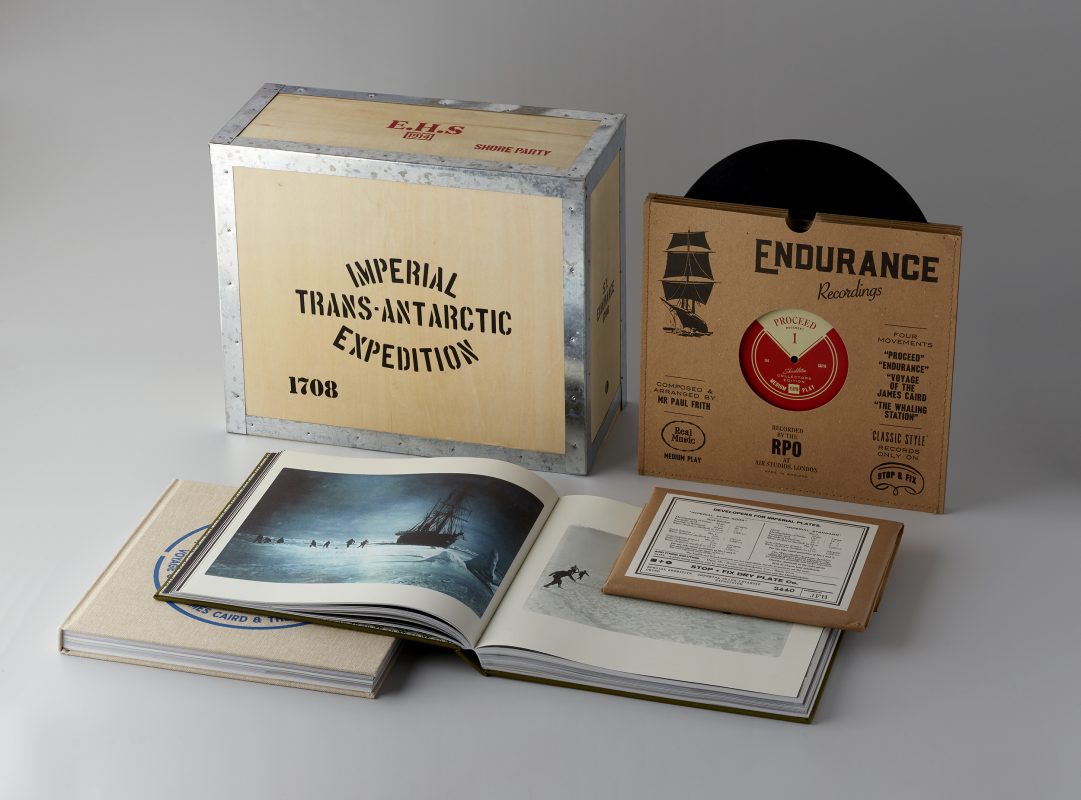 It’s not often I begin a book review with a physical description of it, but this is a package rather than a single volume. The Shackleton Collector’s Edition Box Set must be the most complex book object since the Chinese photographer Peng Yangjun and Chen Jiaojiao’s Box – Pass It On (2012). Like that memorable achievement, it’s another ‘book in a box’, or rather two books in a box. The first publication of STOP + FIX, led by photographer and Mumford & Sons bassist Ted Dwane, graphic designer and artist Ross Stirling, and photographer and director Marcus Haney, is a collaboration between Dwane, Stirling, and musician and composer Paul Frith.

As the subject is Sir Ernest Shackleton’s fabled Antarctic expedition of 1914-17, this box is a replica of a Venessa case, a reinforced plywood box that served as the original cargo boxes packed aboard Shackleton’s ship, the Endurance. Inside are the two volumes comprising the book, and a folding gramophone sleeve containing four 10 inch vinyl records plus an MP3 download. This is a photobook with attitude, combined with a newly composed symphony by Paul Frith, written to celebrate the 100th anniversary of the Endurance expedition, a powerful piece by the Royal Philharmonic Orchestra. Then, just as a piece of icing on the cake, the first two hundred and fifty copies of the publication include a replica glass positive plate similar to those used on the expedition.

There are two principle names in this story. Firstly, there is Shackleton himself, Britain’s greatest Antarctic explorer, and the photographer who took these excellent photographs, including many in colour, under the most adverse circumstances. The photographer was an Australian, Frank Hurley, but he has an important place in British photographic history, as following his exploits on Shackleton’s Imperial Trans-Antarctic Expedition of 1914 to 1917, he served as an army photographer at the end of the First World War and made some memorable images of the conflict.

The story of Shackleton’s great trip of 1914-17 is one of the great tales of heroism, pluck, and endurance and being typically British is one of triumph snatched from the jaws of disaster. After the race to reach the South Pole – a race Britain was desperate to win – ended in December 1911 with the Norwegian Ronald Amundsen gaining the prize, Shackleton, who had come within 97 geographical miles from the Pole in 1909, turned his attention to crossing Antarctica from sea to sea, via the Pole. But the expedition ran into early problems when the Endurance became trapped in pack ice, and was slowly crushed before the shore parties could be properly landed. The expedition escaped by camping on the sea ice until it broke up, and Shackleton ordered everyone to the lifeboats in a bid to reach Elephant Island and ultimately the inhabited island of South Georgia. This involved a hazardous ocean voyage of 720 nautical miles, accomplished successfully and regarded as one of the most notable exploits in Antarctic exploration.

The two part photobook features never-seen-before images from Hurley’s archive, and follows the chronology of the expedition and Frith’s original symphony. It’s worth considering for a moment the effort required to get these great images. Hurley was using large wooden view cameras taking glass plates and lugging these around in sub-zero temperatures, up to the top of Endurance’s masts or the tops of mountain peaks on South Georgia. If photography is about persistence, the Australian exemplifies this to perfection. If that weren’t enough, he also shot cine film and made a renowned movie of the expedition.

In all, Hurley shot over 550 plates. When the Endurance was lost and the expedition was camping on the ice prior to taking to the lifeboats, a episode that produced some of the most iconic images, the photographer sat with Shackleton on the ice and they decided between them which plates should be taken and which should be left in order to preserve weight. Apparently the rejected plates were immediately broken to avoid any prevarication. Hurley had rescued many of them by returning to the half submerged wreck, diving bare chested into three feet of icy water to retrieve lead-lined cases of negatives. In all, 150 of the best plates were saved and form the basis for the two books while some 400 were lost or destroyed.

Of course that the photographs took a lot of effort to make is irrelevant, it’s the quality that counts. Fortunately, Hurley was an above average photographer, that is, he had an eye. Stylistically, he hovered between an art photographer and a reportage photographer – albeit at a time when such distinctions were largely meaningless – but the whole body of work is much more than a basic record of the expedition. There are stunning landscapes, moving portraits of the expedition members, and fascinating glimpses of daily life on the pack ice. But the most iconic and best-known images are of the Endurance stuck in the ice and gradually breaking apart, including one extraordinary nocturnal shot of a spectral boat in the Antarctic dark. As a footnote, it is worth noting that the odd image from the First World War is included, just to remind us what was happening thousands of miles away at the time.

In all this is a splendid and complex package. I have been critical of late about overly complicated photobooks, but here it is fully justified. It seems only appropriate to end with the inspirational words of Sir Ernest Shackleton himself, which apply to bookmaking as well as Antarctic exploration: ‘I believe it is in our nature to explore, to reach out into the unknown, the only true failure would be not to explore at all.’ ♦