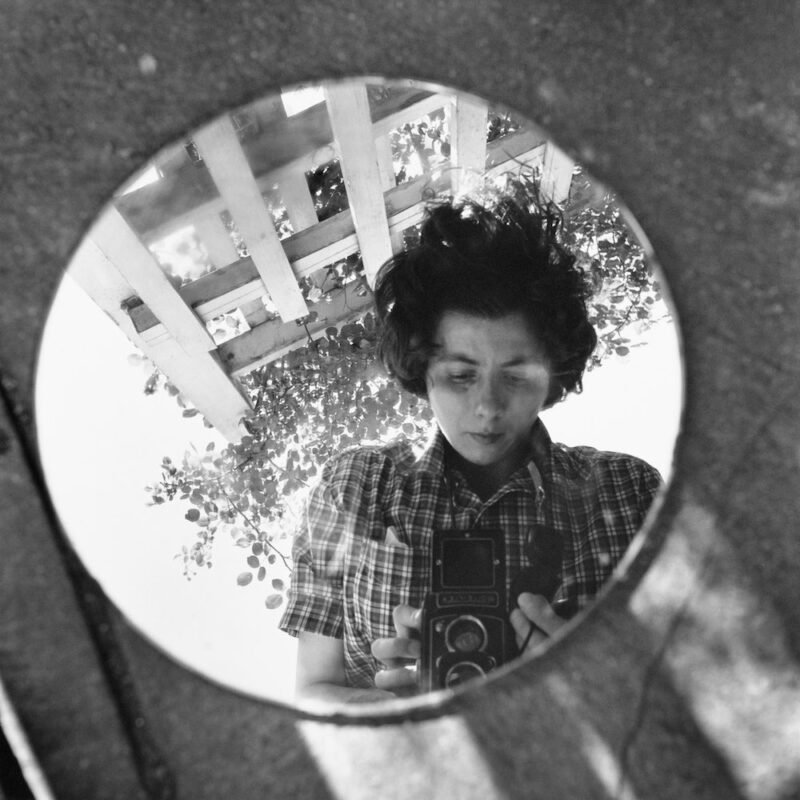 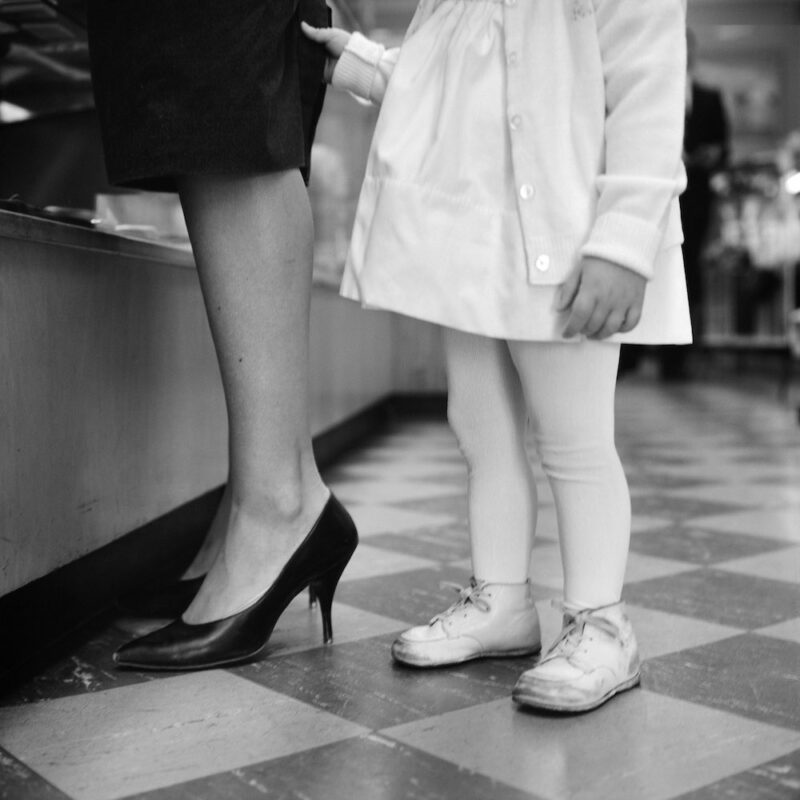 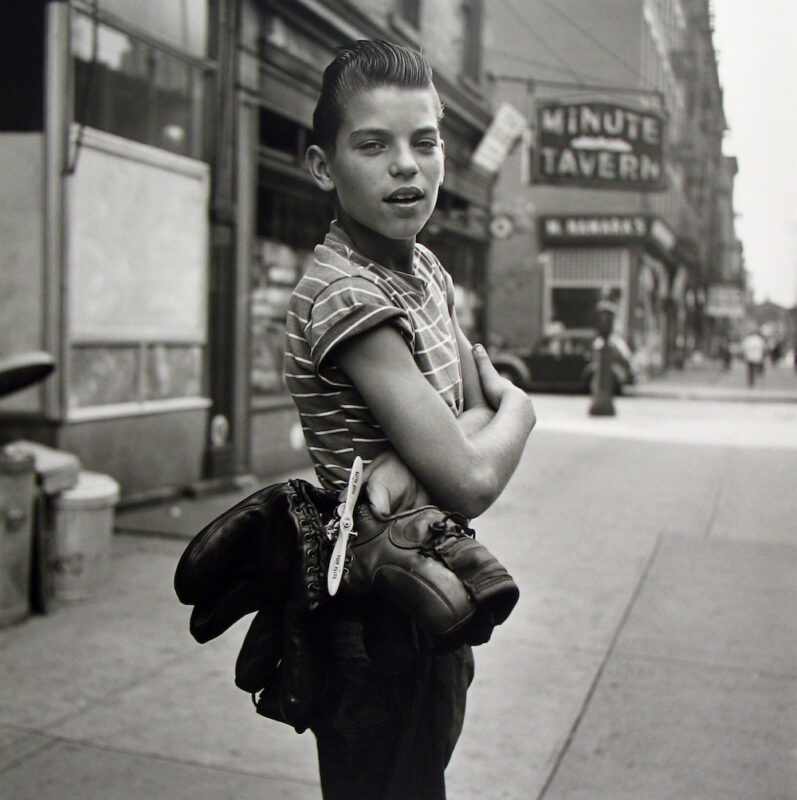 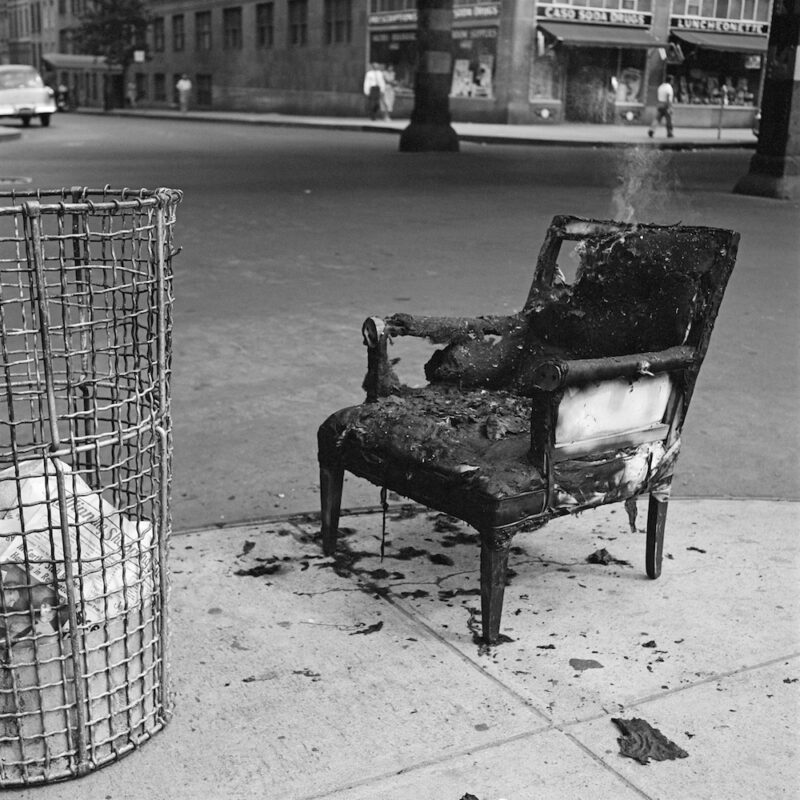 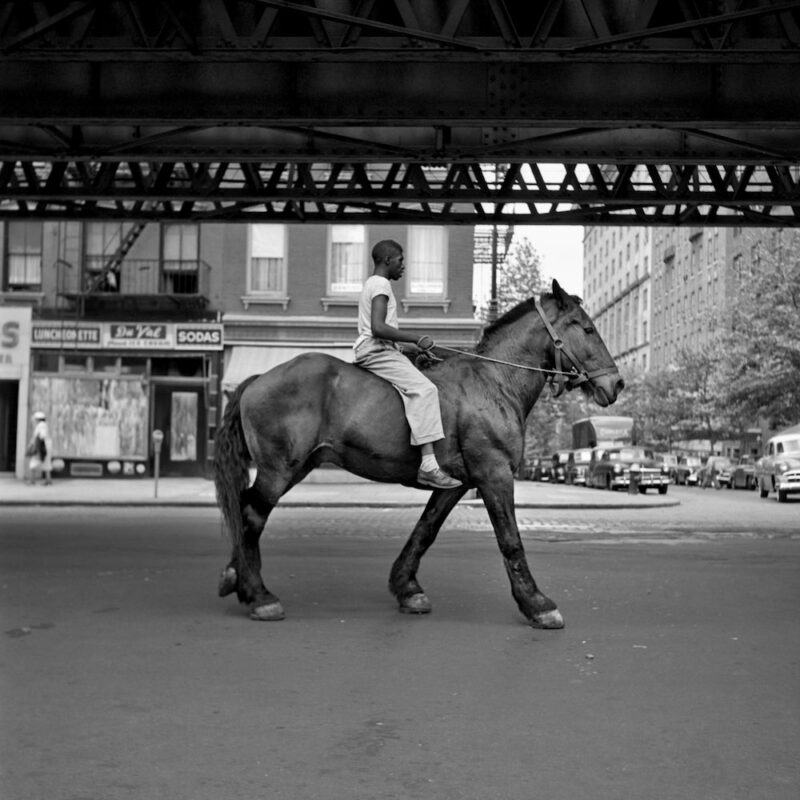 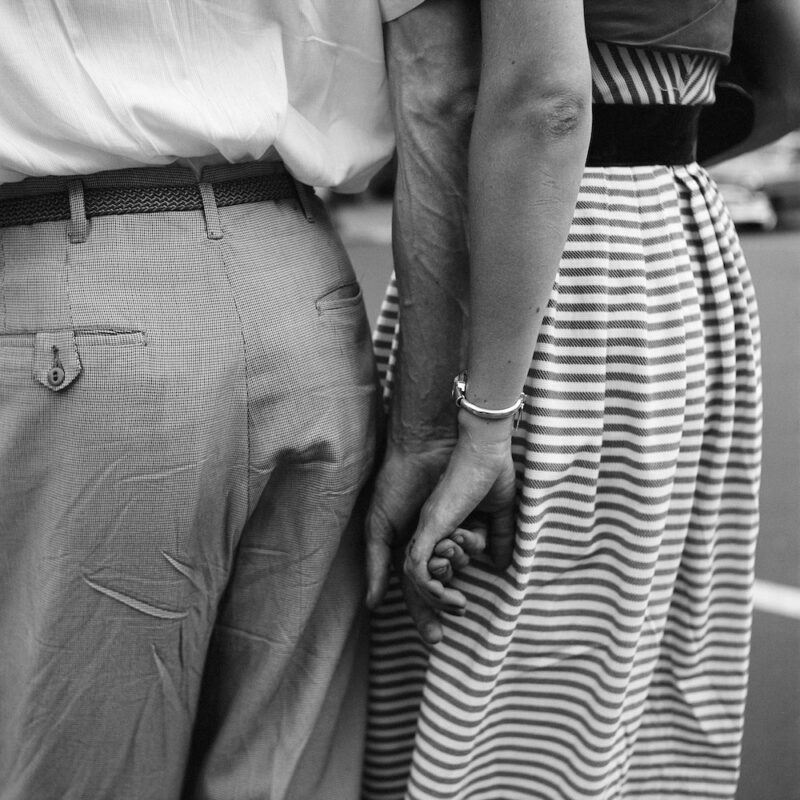 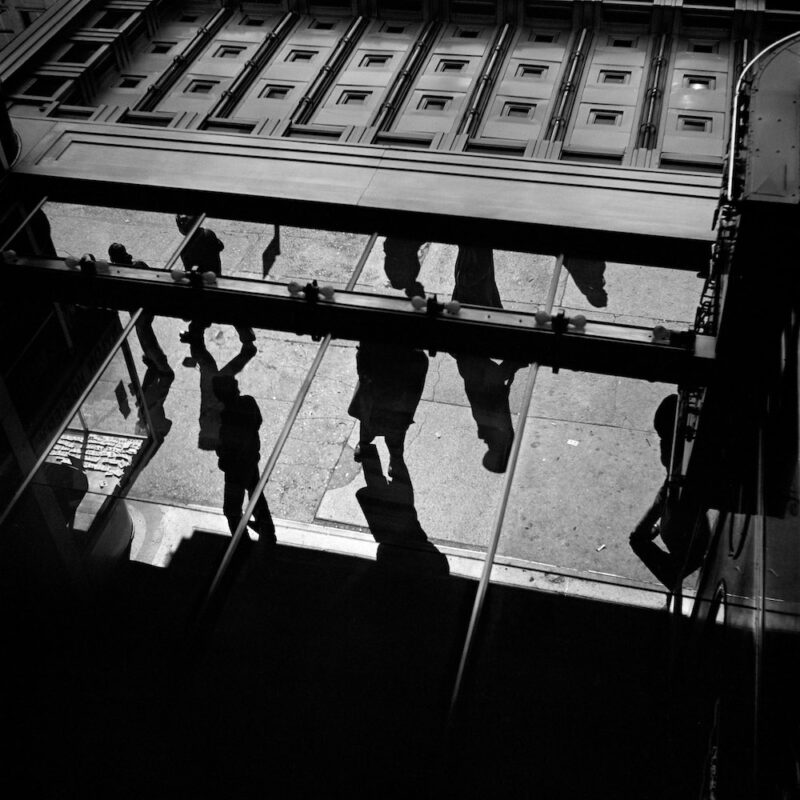 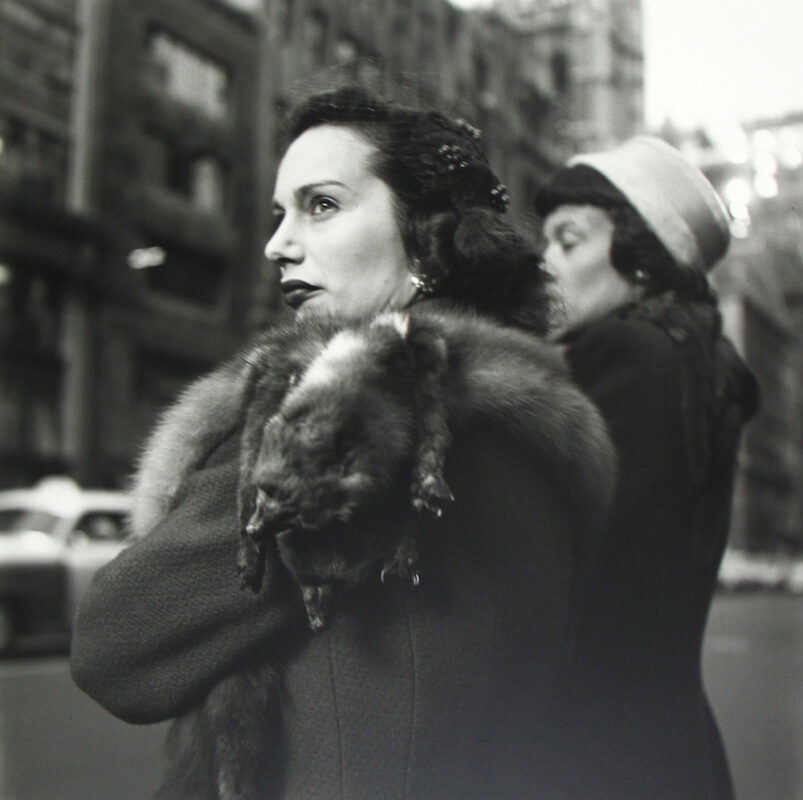 Vivian Maier, the reclusive photographer who made her living as a nanny, has become a fantasy figure for curators and photographers to imagine and shape as they want, argues Mark Durden in response to Anthology, the recent MK Gallery exhibition in Milton Keynes.

The story of Vivian Maier’s discovery and posthumous fame is fantastic. So much so that the trickster artist Joan Fontcuberta, in one of his recent public talks, mischievously said he had created her and asked an historian in Chicago to create the context for her work. He was joking of course.

The work of this reclusive photographer, who made her living as a nanny, came to light when the contents of a storage space she defaulted on was auctioned off in 2007, a couple of years before her death. She has subsequently become, as Fontcuberta suggests, a Mary Poppins figure whose Aladdin’s cave of photographic treasures feeds our desires and fantasies, which in the case of the exhibition Anthology, at the MK Gallery, Milton Keynes, seem to be centred upon the lost art of street photography.

The Chicago historian John Maloof was one of the buyers of Maier’s possessions and subsequently has been integral to the promotion and celebration of her photographic work – he now owns 90% of her output, over 140,000 images as well as 8mm film and audio recordings. It is from this collection this show is drawn – with over 140 photographs it makes quite a substantial exhibition, but at the same time represents a mere thousandth of the mass of photographs she left behind. With much of the exhibition given over to her black and white square format street pictures of New York and Chicago in the 1950s, she is being hyped as a new addition to an old school. Her black and white pictures are both new, in the sense they have not been seen before, and old in that they mark a past moment that we cannot really have again.

The show runs through the familiar array of street photography type subject matter – both observed and unobserved depictions of the carnival of different folk encountered in urban spaces. The picture of two elderly men crouched in contemplation over a coil of piping on a rainy sidewalk introduces the street photographer’s love of the surreal comedies of seemingly inexplicable witnessed events. The photograph of the still smoking remains of a burnt-out armchair on the sidewalk is of similar ilk, a beautiful mysterious incident. There is also the isolation of significant gestures and details, the tender touch of a couple holding hands, secretly observed from behind. The Rolleiflex camera held at waist height and into which she would look down into its viewfinder, was ideal for such surreptitious glimpses.

Maier can be astute in her picturing of the tensions and contradictions of conflict, as in the photograph entitled Armenian Woman Fighting (1956), which shows a stout older woman standing firm and defiant before a young police officer on the street in New York. The picture concentrates us on an intimacy despite their confrontation through the way his hands can be seen tightly gripping one of hers, as he tries to calm her. And there is a great image of disdain before wealth with a photograph of a woman, adorned and wrapped with two dead mink, the creature’s faces and claws all too visible and making a jarring contrast to her carefully refined self-image.

Maier was not naïve. She was an avid film goer, both mainstream and avant-garde. A footnote in the recent Thames & Hudson monograph on Vivian Maier refers to how a house manager at a Chicago movie theatre said she even took an interest in Andy Warhol’s films. There is a certain Warholian aspect to her witty play with selfhood in her self-portraits, which are not revelatory but deadpan, blank and affectless. Perhaps one can also see her fascination for news stories and newspapers in relation to Warhol. Amongst the black-and-white street photographs, there is a remarkable and unusual close-up picture of the sides of two stacked newspapers – stuttering repetitions of photo images showing serious looking men in one stack, recurring Snoopy cartoon captions for laughter in the other: HA HA HA HA HA!. As one of her employers has recounted in Maloof’s documentary film about the photographer, Finding Vivian Maier (2013), she became an obsessive hoarder of copies of The New York Times, which she read daily and also photographed.

The opening wall text at the MK Gallery declares that this ‘self-taught artist’ now belongs to the canon of photographers alongside Diane Arbus, Robert Frank, Helen Levitt and Garry Winogrand. This is all very well and good, but what really separates her work from those she is compared with, what makes it distinct? The self-portraits begin to signal a break from this street tradition as does her attention and fascination with newspapers, but the show does not make enough of her newspaper photographs and neither does it really emphasise enough the oddity of her self-portraits. The MK Gallery does however register the shift in her work as she started to use the Leica camera and colour film in the 1970s. Here one can find something different and less familiar. Her pictures and picturing are more layered and complex. In a photograph taken in an art museum, she plays upon the subtle interconnections between a smartly dressed woman and two girls and the painted portraits behind them. One child stands apart, rapt in attention, presumably captivated with the strange figure that Maier must have made as she took the picture. In an unusual self-portrait, her shadow and that of another figure is played off against and amongst different images on movie posters, with her shadow overlaying the image of an angel from the film Heaven Can Wait (1978), which is next to the image of an endangered female water skier on a Jaws 2 (1978) poster. And in a display of mirrors etched with the faces of stars, her hatted reflection appears over the face of Marilyn Monroe.

In a few colour photographs, the cropping and cutting of images provides her with a distinctive pictorial strategy. In the close-up of a newspaper, the rack’s Chicago Tribune sign cuts up the face of Nixon as we ponder the absurdity of his headline quote ‘Bombs saved lives’. In her picture of a suited African-American standing before her, she deliberately crops out his head, which draws attention to the way he is holding out a printed copy of The Last Messenger (1979), bearing a portrait of the face of the religious leader Elijah Mohammad.

With the last colour photograph included in the show, dated 1986, Maier has taken her ultimate self-portrait by photographing just her red hat and blue coat spread out on wooden decking. It seems a very knowing image. It beautifully suits what she has now become: a hollow figure to be taken up and reinvented again and again. Fontcuberta’s claim to have created her is then probably not that far from the truth. She is a fiction in that she has become a fantasy figure for curators and photographers to imagine and shape as they want. The problem with the MK Gallery show is a question of how Maier’s work has been filtered. By delimiting her work to more familiar and populist street photography modes, we are in danger of losing all that is weird, rich and complex among the extraordinary mass of images she has left us.

Mark Durden is a writer, artist and academic. Together with David Campbell and Ian Brown, he works as part of the art group Common Culture. Since 2017, Durden has worked collaboratively with João Leal in photographing modernist European architecture, beginning with Álvaro Siza. He is currently Professor of Photography and Director of the European Centre for Documentary Research at the University of South Wales, Cardiff.