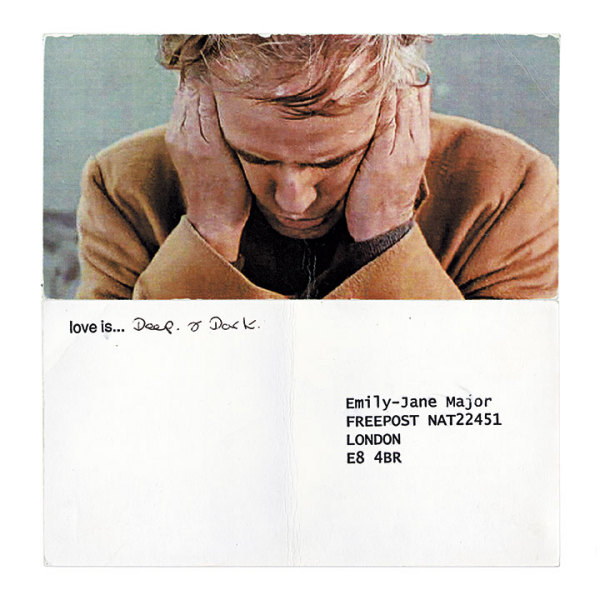 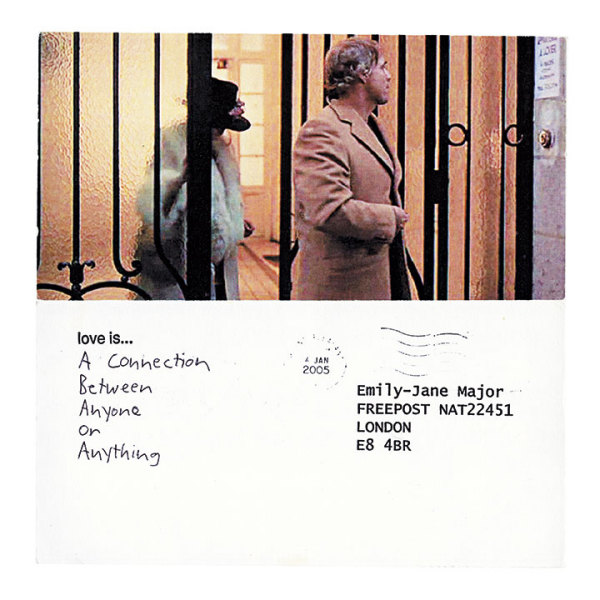 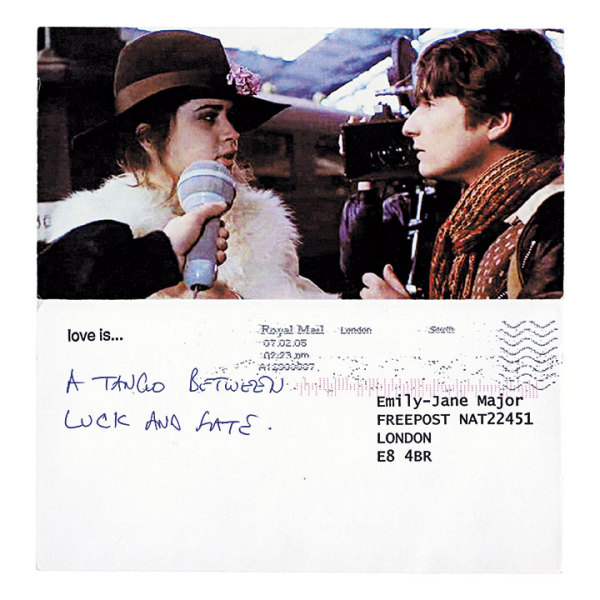 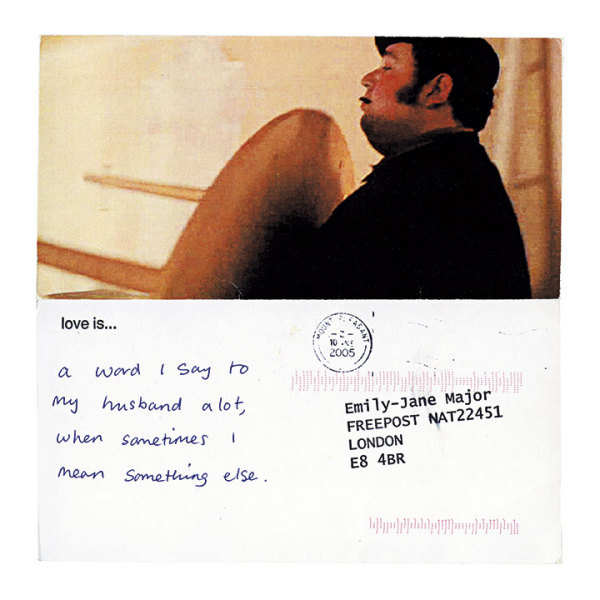 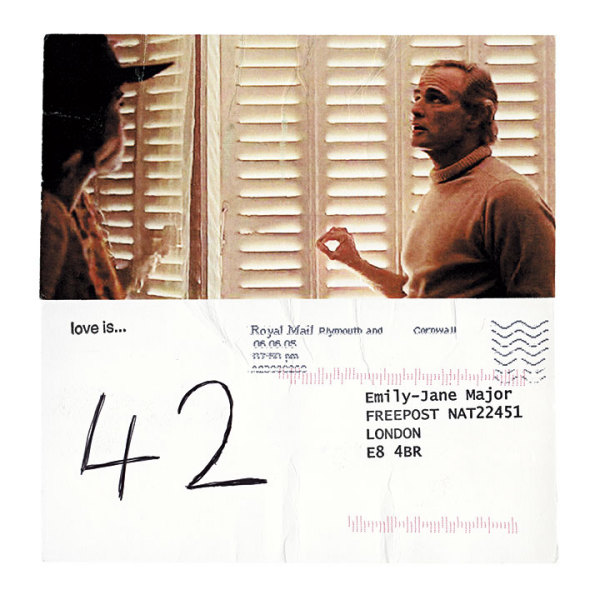 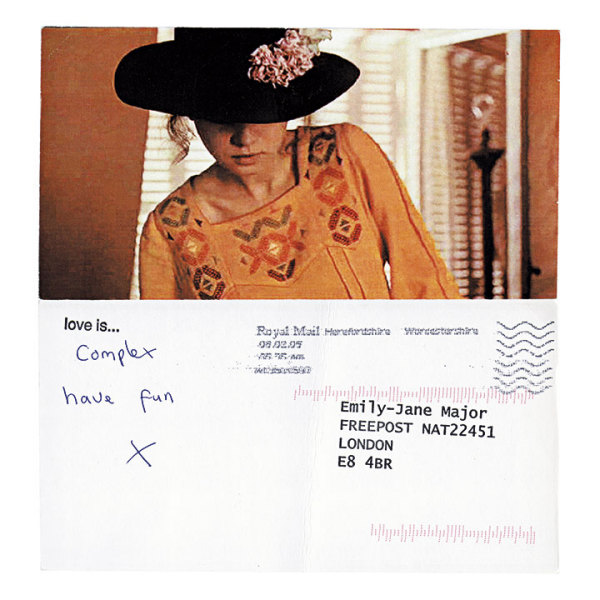 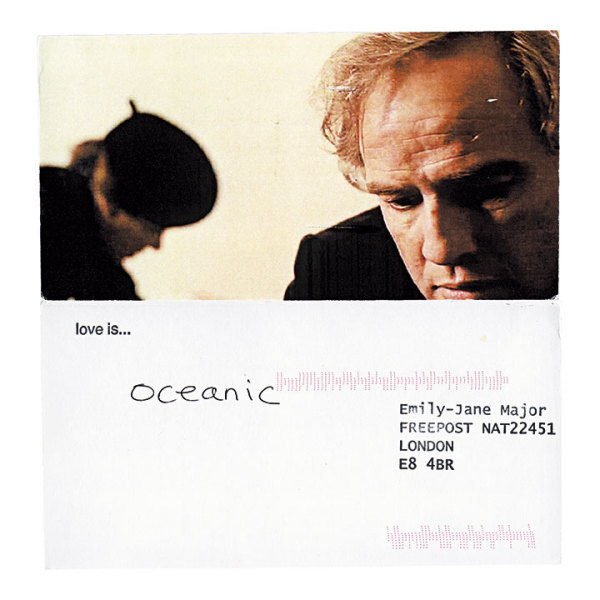 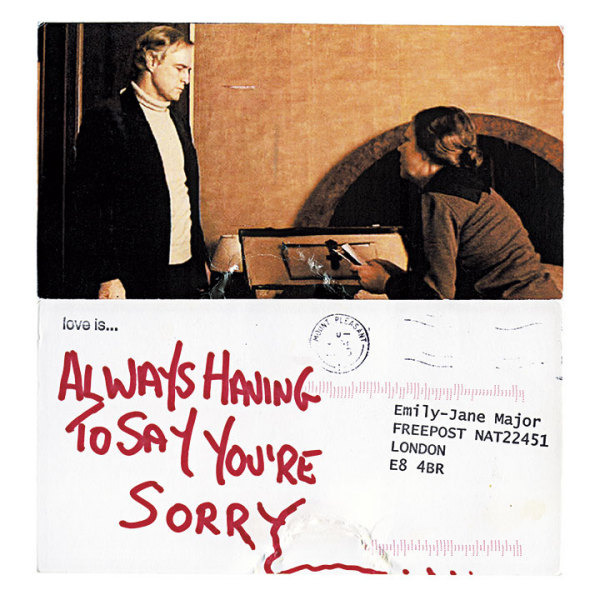 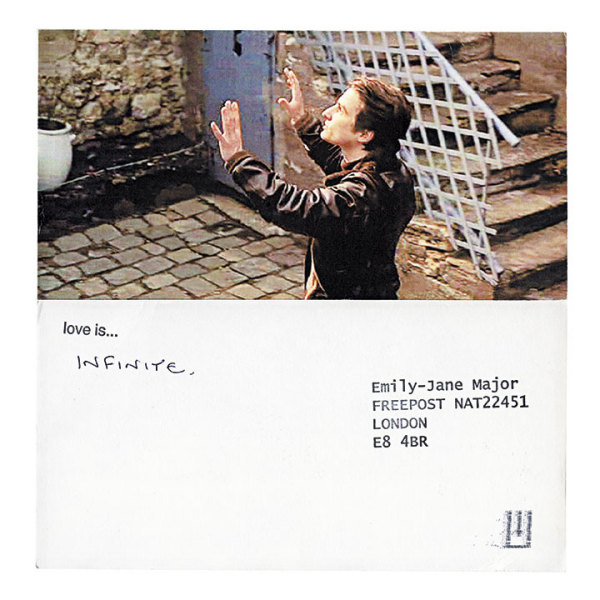 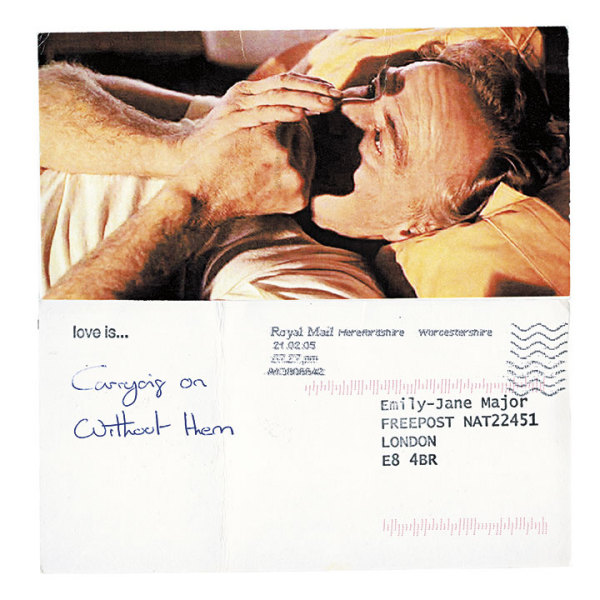 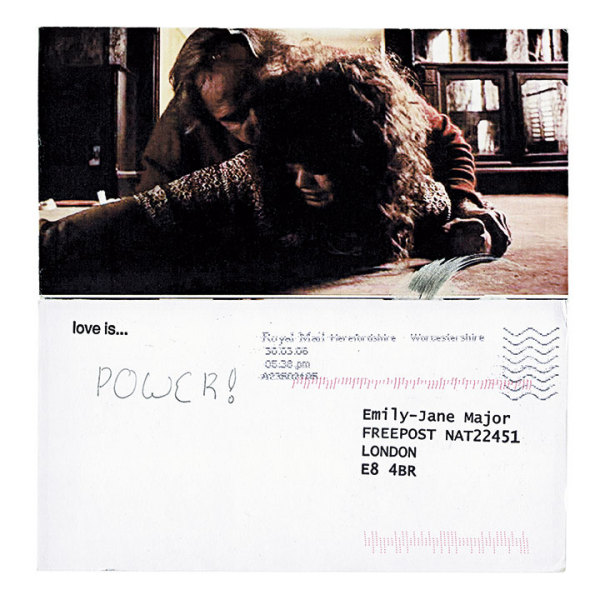 Between 2004 and 2011, as part of her wider practice investigating representations of women and expectations of femininity, EJ Major took love as a subject. Using existing cultural material as a starting point, she painstakingly took an image of each frame from Bernardo Bertolucci’s 1972 film Last Tango in Paris, printing 7000 postcards. On the verso, in the upper left hand corner, Major included the prompt ‘love is…’, the title and rhetorical lead for Kim Casali’s series of widely syndicated one-frame cartoons. Recipients of Major’s cards – strangers, distributed across a variety of geographies – were asked to return them, with or without response, to a freepost address, printed on the right hand side of the card’s reverse. In her resulting book, which shares its title with the cartoon, both sides of the postcards, returned to Major, are reproduced, the responses both tellingly generic and profound. Bertolucci’s film, controversial and partially censored upon its release (and the subject of continual revision about its own ethics as a production ever since), meets its opposite: a contemporaneous, yet sharply uncontroversial, saccharine cartoon.

Their respective differences seem to embody not only different philosophies about love, but fundamentally different choices about how to act. Between enthusiasm and indifference, or between kitsch or romantic naïveté, and intellectualised distance, we cannot fail to have both singular and culturally conditioned responses to love. We may of course seek to downplay it, or declare it as truism, but much of what we think love to be is determined by the images of romance that are laid on for us through photography, television, literature, film and illustration. And what do they tell us? Often they demonstrate hackneyed themes of soap opera dramatics and idyllic seclusion from other events in the world. These mediated expectations are experiences with a sweeping narrative, packed with dramatic tension: they depend upon last-minute moments of intense, spectacular visuality. For something so intangible, the need for concrete representations (visual or linguistic) is striking. Major’s project takes on the ambiguity of both clichéd and resolutely anti-clichéd approaches to a frequently depicted subject that seems to resist representation.

Considering the linguistic and visual representations as prompts, being given a card by Major, each participant holds in their hands a single fragment of Bertolucci’s film – and Casali’s ubiquitous and unchanging text on the reverse. Placed into dialogue, both components, with their alignment of picture and language, produce continuity and disruption, impacted by the image, which becomes the projects variable. Some combinations appear to illustrate love effectively; others demonstrate the assumptions of the textual anchor as explaining something that cannot be readily identified in the image. In a Baldessari-like play on the arbitrariness of the relationship between a signifier and signified, images of steely-eyed indifference, become scenes of longing, others seem impenetrable in their associations. Everything in Last Tango in Paris, however indifferent, is transformed by the newly inserted linguistic anchor, but are ultimately modified by the variations in the visual event to which they supply a caption. Major draws our attention to this variability, and to the structuring of love as a prevalent subject in mass media.

As the book develops, the changing images come to contest and fracture the innocent language of the text. Laid out in their original filmic sequence (comprising over 450 of some 7000 frames, more than sufficient to reconstruct the film’s structure and events), the film’s narrative develops in front of us, initially haunted by the text’s recurrent questioning. The protagonists’ casual relationship, played out between Marlon Brando and Maria Schneider, develops its friction of anonymity and emerging personal knowledge, with only occasional, knowing acknowledgement from the card’s respondents, who sometimes recognise the film or its status as a found filmic still. Their responses, for the most part, are short and economical – many are general, while others are generic or idiosyncratic in their removal from context. But as Last Tango in Paris’ most notorious scene takes place, Brando laying over Schneider, butter in hand, the responses from Major’s audience shift noticeably. Here, commentary is directly impacted upon by the image, and seems to respond to it (recognition of its source or not). The stark distinction between the saccharine love is… and Last Tango in Paris is jolted by the deep ambiguity that sex plays as part of an exploration of love. A series of kneejerk defences of love result from these scenes, the now-seemingly-ironic love is… perhaps taunting the receiver of the card. Without any alteration, both image and text have the effect of goading responses out of language’s usual passivity. Together, the two elements serve as representational prompts in Major’s project, though here, in a rare instance, the image slowly overturns the supposed innocence of the text.

The short aphoristic meditations which Major receives, in their accumulation, might form a census or poll that the project’s formation has made possible. A questionnaire of sorts, we might look at love is… as an object of research, as an anthropological or sociological document – are we willing to talk about love? And if we are, what are we saying? Are we able to say something about it that comes from ourselves and not from cliché? Can we negotiate mediated representations of love towards something that is meaningful and singular?

Ultimately, Major’s method is one of delicate alteration. Without altering her filmic or written source material, she brings about a transformation occurring through variation. Her comparatively hands-off method transforms her relationship to those dominant poles of appropriation and participation, through which so much artistic practice uncritically traverses. With its multiplicity of voices, Major’s project seems to find a way into engaging our own responses, negotiated but only partially informed by the voices of mediation. ♦

All images courtesy of the artist. © EJ Major